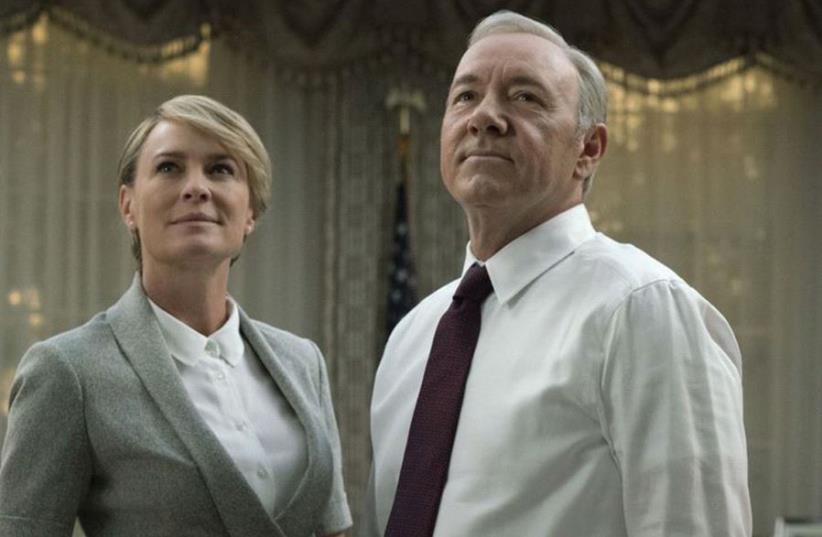 House of Cards
(photo credit: PR)
Advertisement
Pity the poor writers at House of Cards. In the just-released Season 5 (all the episodes of which are on YES VOD and HOT VOD), they have had to come up with story lines about politics in America that are interesting enough to lure viewers away from the news. America’s fictional Machiavellian first couple – Francis “Frank” (Kevin Spacey) and Claire (Robin Wright) Underwood – are as devious as ever, whether they are murdering an associate in cold blood or playing dirty tricks on their rivals.But Frank Underwood’s discipline and even-handedness even when he is seething inside, his ability to play the long game, seems like someone out of a John le Carre novel compared to President Trump’s Twitter outbursts.It’s much easier to guess what the Underwoods are going to do next than to imagine the next real-life news report, since the Underwoods act out of clear self-interest at all times.The important point for television viewers is that the fun that could be had from watching the ruthless Frank, who opened Season 1 by killing a dog without the slightest emotion, has more or less disappeared. Compared to what’s really going on in today’s White House — Trump’s firing the head of the FBI, the ongoing investigations into whether senior staffers hid their contacts with Russia, the fact that the press secretary denied that Hitler used chemical weapons and kept his job, and, of course, the continuing mystery of “covfefe” — the Underwoods’ cool calculation seems more one-note than ever before.It’s almost as if the show’s writers gave up in despair somewhere during the course of the season, as there is virtually nothing that deepens our understanding of the characters, or any compelling moments in the Underwoods’ relationship with each other. The one scene I enjoyed this season was the Underwoods’ pre-Election Day ritual of watching the film Double Indemnity and reciting the dialogue with the characters. Of course, Barbara Stanwyck and Fred MacMurray are amateurs at deception and immorality compared to Frank and Claire.It’s All One Big Show: Among some of the new supporting characters on House of Cards this season are Campbell Scott, who plays Mark Usher, a campaign consultant who is not above blackmail (but on this show, no one is). He is the son of actor George C.Scott, and television viewers will recognize him as the shadowy billionaire Boris from Royal Pains.Patricia Clarkson plays Jane Davis, a DC bureaucrat who knows a suspicious amount about rival terror groups in Syria. She is best known from movies such as Vicky Cristina Barcelona and The Station Agent, but she also played Sarah on the TV series Six Feet Under.The Leftovers, that show about the aftermath of the sudden, inexplicable disappearance of two percent of the world’s population in one split second, known has The Departure, has departed for good.The third and final season, which is available on HOT VOD and YES VOD, was undeniably entertaining, as the cast moved to Australia in their quest to understand what happened and why.There were a number of overthe- top twists that distracted from the relentlessly downbeat atmosphere that has made The Leftovers difficult viewing, notably the episode “It’s a Matt, Matt, Matt World,” where Matt (Christopher Eccleston), a disillusioned preacher, and some of his friends travel to Australia by ship, with a cult that worships a virile lion, following the explosion of a nuclear submarine caused by a deranged French sailor. And then there were episodes that got really bizarre.Many commentators have waxed rapturous about the finale, which I won’t spoil but in which Nora (Carrie Coon), who took a journey via a scary machine to find her children, gives a rather bland explanation (or a version) of what happened to The Departed. Just as with the finale of Lost, the previous series by Leftovers showrunner Damon Lindelof, this answer will divide viewers.In the end, though, Kevin Garvey (Justin Theroux), the everyman at the heart of this series, was too bland a character for me to completely connect to this series. I watched it out of a desire to understand what so many people loved, but I never looked forward to it.