Hotel Montefiore’s French-Asian cuisine combines the best of both worlds. 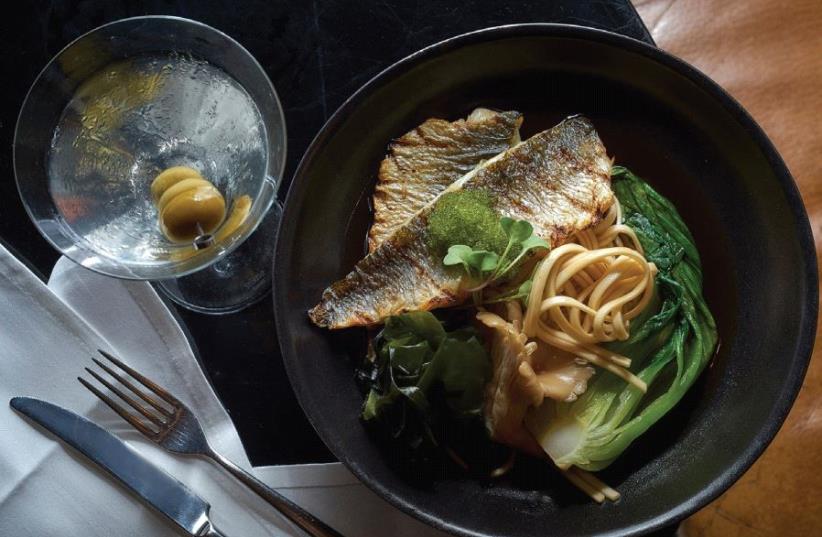 Hotel Montefiore’s restaurant
(photo credit: PR)
Advertisement
The R2M Group – parent company of CoffeeBar and Brasserie M&R, among others – comprises some of the best restaurants in Tel Aviv. So it is only natural that when owners Ruti and Mati Broudo branched out into the hotel business, a restaurant would be at the core of the establishment – and, indeed, be indistinguishable by name.As befits one of the city’s finest boutique hotels, the dining room’s starched white linen tablecloths set the Hotel Montefiore’s elegant tone.According to our knowledgeable and friendly waiter, who clearly enjoys explaining the restaurant to newcomers, the cuisine is French fusion that favors Vietnamese but also draws on Indian, Japanese and Chinese influences. The menu is not divided into the usual starter and main course categories but rather set out in groupings of three to five dishes, with the sections progressing in size from small to medium to large. We were happy to listen to our waiter’s recommendations, as well let him be the judge as to the order in which the dishes were served.He suggested starting with one of the restaurant’s cocktails, which by and large are classics, with a twist of originality. We decided on the Dark and Stormy (NIS 54) – dark rum, ginger beer, bitters and lime – a refreshing drink that gets its kick as much from the ginger as the alcohol.As we sipped our drinks, breadsticks were served. Something between grissini and baguettes, they were literally too hot to handle.However, once they cooled off, they were delicious with the accompanying mound of soft European butter.Our first course was chosen from three pasta dishes: truffle and goat cheese ravioli (NIS 56). One of kitchen’s signature dishes, these delicate pasta pockets were stuffed with a decadently rich filling and served under broad ribbons of shaved Parmesan and atop a smear of broccoli cream. The medium-sized serving disappeared much too quickly.From a selection of three raw fish/ seafood appetizers came the raw yellowtail, yuzu (NIS 68) – an Asian ceviche, so to speak. The sashimistyle slices of amberjack were served on razor-thin slices of turnip that had taken on the reddish color of the beetroot-yuzu (Japanese lemon) marinade. The morsels of exceedingly fresh fish melted in the mouth, leaving behind a pleasant tingle of heat.We decided to move on to two medium-sized dishes rather than one large one. The crispy chicken is certainly one of Hotel Montefiore’s signature dishes, since it comes as either a medium or a large entree (NIS 42/82). The chicken is first cooked in a Vietnamese five-spice mixture, then flash-fried for a crispy skin. The succulent chicken, which had the look and flavor of having been slightly smoked, begged to be eaten with our hands. It came with a pungent sriracha dipping sauce, which takes a bit of practice to determine just the right amount to enhance the meat without overpowering it.Rounding out our mini-tour of Asian dishes was an Indian entry, which deviated slightly from the written description but was helpfully explained by our waiter, first and foremost by specifying that the “rump” was roasted lamb rump (NIS 48). The tender meat – a generous portion for the price – was expertly seasoned with a mild yellow curry sauce and served with a tasty, crispy spinach chappati.The waiter also helped with wine pairings, from an international list representing eight countries. Our glass of red was a pleasant Barbera Piemonte from Italy (NIS 44), while our glass of white was a slightly fruitier German Weissenburgunder (NIS 49).There was no printed dessert menu, although one does appear online. By the time our waiter had rattled off four possibilities, we had made our choice. First was the limoncelli, described to us as Hotel Montefiore’s interpretation of key lime pie (NIS 38). A tall goblet of lemon chiffon piled atop butterscotch cookies, this fluffy citrus confection was a scrumptious palate cleanser.Last was a decadently rich combination of two favorites: creamy rice pudding with a scoop of chocolate hazelnut ice cream and a sprinkling of chocolate crisps (NIS 42). A treat that was greater than the sum of its parts.The writer was a guest of the restaurant.Hotel MontefioreNot kosher36 Montefiore Street, Tel Aviv Tel: (03) 564-6100