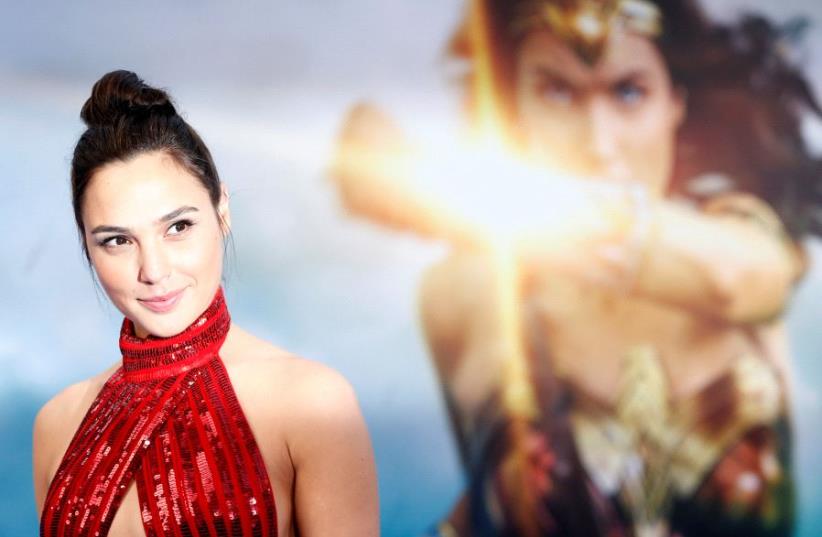 Cast member Gal Gadot poses at the premiere of "Wonder Woman" in Los Angeles, California U.S., May 25, 2017.
(photo credit: REUTERS/MARIO ANZUONI)
Advertisement
She’s on billboards, magazine covers and in tens of thousands of theaters around the globe.But once upon a time, Gal Gadot was just an Israeli kid living a normal life in the quiet central city of Rosh Ha’ayin. And now, it’s surreal for some of those she grew up with to see Gadot as the star of Wonder Woman, a huge international blockbuster film.“For weeks I’ve been flooded with pride, hesitating whether I should write a post or share articles, and I decided to just enjoy the moments where people speak and write about you and I listened and enjoyed from the side,” wrote Shira Dvir, Gadot’s cousin, on Facebook on Sunday. “But at the end I broke down; a minute after we left a family viewing, watching grandma watch you on the screen, in a movie that is all you,” she added.Dvir said she “remembers the morning that you appeared on the back page of the newspaper with a crown on your head [when Gadot was named Miss Israel in 2004], and how dad insisted I take the newspaper to school and show it to everyone.” And now, she added, “suddenly your gorgeous face is on every poster and ad in every place around the world, and I and all of us are so proud of you.You are proof that with hard work you can get as far as possible, and not forget to stay human and true to yourself for the entire journey.”While Dvir is family, it’s also hard for other residents of Rosh Ha’ayin not to get excited at Gadot’s rapid ascendance to Hollywood royalty.“Actually, it is possible to succeed when you’re a graduate of Begin High School in Rosh Ha’ayin,” wrote one fellow alumni on Facebook this week. “Just look at Gal Gadot, and me...”The Facebook page for the municipality, meanwhile, posted an image on Monday of the movie star with a Rosh Ha’ayin logo.“Congratulations Gal Gadot!” it read, “our Wonder Woman,” signed by the mayor and local council members. Residents replied in the comments that she “brings pride to the city and the country.”And in Israel, even business is personal.Hadas Mozes Lichtenstein, of the ADD agency, which represents Gadot in Israel, couldn’t contain her excitement – understandable, since she flew out to be at the Los Angeles premiere late last month alongside the show’s star.“There are moments in life that you can’t explain in words,” she wrote on Facebook.“Very few people know what you experienced the past few years – the sacrifice, the mental and emotional effort, and mostly the hard work. My heart is bursting with pride, happiness and satisfaction at your journey and how faithful you stayed to yourself.... I love you, sis.You deserve it all – you really are Wonder Woman.”Gadot simply replied: “I love you, sister.”Bat Cohen Lavie, CEO of her own PR company, had some words of her own about Gadot.“Gal, you were always the real wonder,” she wrote, “with no need for any polishing.Anyone who ever met you for a minute knows immediately that there is nobody like you, and that you are all heart.”And Gadot felt it too – replying to the post with “You moved me – truly.”