Countering suggestions that boycotts are a constructive tactic, she said that it was a privilege and responsibility to travel in order "to listen, to learn, to try to understand." 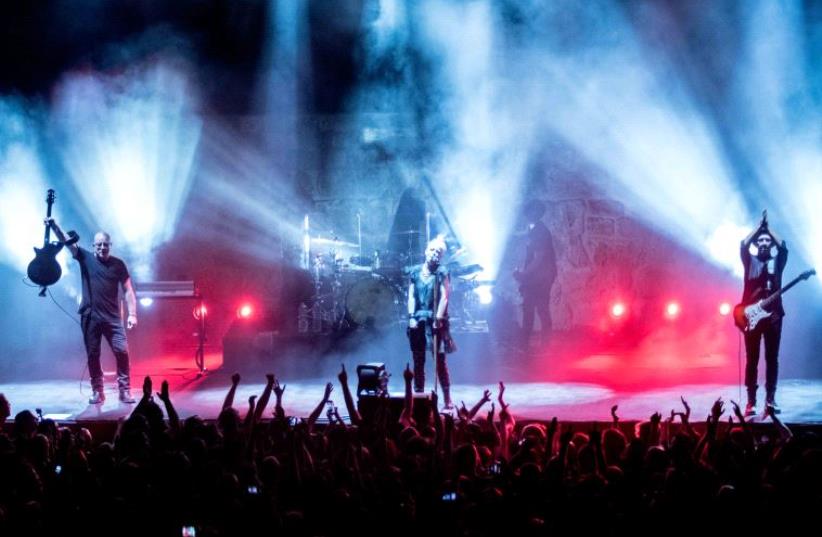 Garbage performing at the Amphi Shuni theater in Binyamina on August 16
(photo credit: LIOR KETER)
Advertisement
Garbage front woman Shirley Manson on Tuesday forcefully rejected calls from Boycott, Divestment and Sanction (BDS) supporters to cancel their two-night gig in Israel.“We as a band have been getting a bit of flack for coming to play Israel,” Manson told a rapt audience at the Amphi Shuni theater in Binyamina.Manson, clad in brick-patterned tights with her pink hair pulled up in a bun, continued: “People are very very quick to make judgments and they know nothing, necessarily, about all the facts. But we in Garbage believe completely and entirely in tolerance and kindness and respect. We believe in non-violence, we believe in compromise and we believe in discourse and intelligent debate.”Before taking the stage, Manson elaborated the band’s thinking in a Facebook post.“As a musician I hold on to my right to travel to Israel and not be accused of denying the State of Palestine or of being on one side of the conflict over another. This is NOT the case. I know enough to understand that I don’t know enough about much,” she wrote. “I stand in the middle, hoping that peace prevails and the art of negotiation and compromise is practiced.That weapons are dropped and the killing stops,” she added.Countering suggestions that boycotts are a constructive tactic, she said that it was a privilege and responsibility to travel in order “to listen, to learn, to try to understand.”A conflict as complex and long-lasting as the Israeli-Palestinian conflict, she contended, would not be easily solved with simplistic solutions.“I know enough to understand that I don’t know enough about much,” she said, with a level of humility that is all too rare in the Israeli- Palestinian debate.Musicians and entertainers who perform in Israel are regularly inundated with calls to cancel their shows in protest against Israeli policy, though that hasn’t stopped a slew of big names from performing. In recent years, The Rolling Stones, Madonna, Elton John, Lady Gaga, Rhianna, Sia and other megastars took the stage in the Holy Land.“You can rail at me all you want. That is my position. All Killing of Innocents is WRONG,” Manson concluded in the post.The 1990s alternative rock band, which last played in Israel in 1999, captivated the crowd with hits such as “Only Happy When It Rains,” “Special” and “#1 Crush,” as well as entries from their sixth and latest studio album, Strange Little Birds.During the show, Manson marveled at the fact that they were playing in an ancient, 2nd century BCE Roman theater. The Shuni theater was restored by the Jewish National Fund in 1986, and turned into a music venue. The experience, she said, was “nuts,” and a career highlight for the band that broke out with their eponymous EP in 1995.Despite the notable absence of the band’s drummer, legendary producer and musician Butch Vig, the roughly 100-minute set was well received, in no small part because of Manson’s energetic performance and strong support from band-mates Duke Erikson and Steve Marker.