By DAVID BRINN
The Market House boutique hotel in Jaffa
(photo credit: PR)
Advertisement
If you like to have your cake and eat it too, the Market House boutique hotel in Jaffa should be the next place you book a room in. That means if you enjoy the hustle and bustle of places like Old Jaffa’s flea market with its jam-packed alleys of cluttered antique shops, oldschool hustlers and bargainers, and crowded eateries and bars but also revel in the luxurious comforts of a classic hospitality, then all are readily available within a few steps of each other.The name Eshel is an abbreviation for “food, drink and sleep,” so it makes perfect sense that the 44-room Market House Hotel opened two months ago in the heart of the flea market on historic Beit Eshel Street (near cultural icon Dr. Shakshuka!) and has already started attracting droves of visitors both local and international.“About 50 percent of our guests are foreign tourists, and about half of them are businesspeople who book long term, often two to three weeks for work in Israel,” said Eran, who was working at the front desk when my wife and I arrived for a 24-hour midweek getaway. “The other half are Israeli tourists who come to explore Jaffa, usually on the weekends from Wednesday through Saturday.” 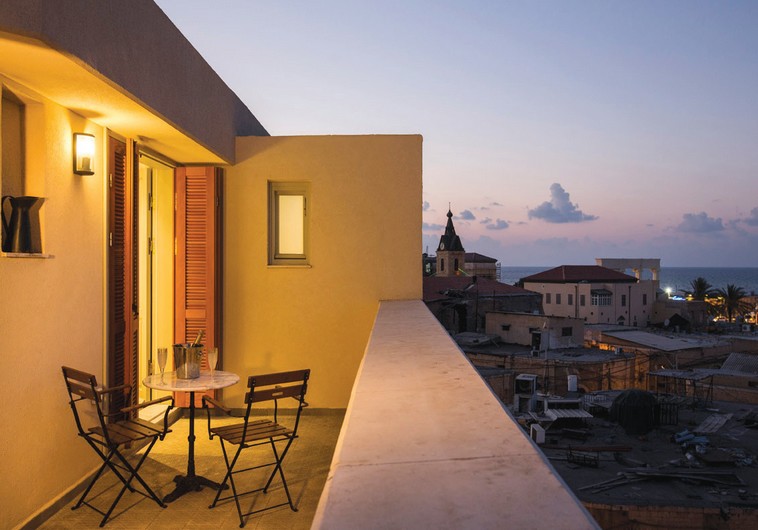 What draws the diverse crowd to the hotel, housed in a historic building once owned by the Greek Orthodox Church and housing eighth-century Byzantine remains, is the combination of location, opulence and affordable prices the hotel offers.The Market House is the pet project of the Atlas Hotel chain, Israeli experts in boutique hotel restoration and management.With six hotels in Tel Aviv and dozens of others around the country, managers Danny Lipman and Leslie Adler had their eyes set on the Jaffa location for a long time.“We’ve seen in recent years the resurgence of Jaffa in general and the flea market area in particular. Thanks to the development of the area and the opening of shops, night spots and restaurants, the shuk has become a magnet for tourism, both local and foreign. Therefore, we’re proud to open the first hotel in the flea market, one that integrates the new and the old,” they explained in a statement.Even before the Jaffa renaissance, Atlas had eyed the Market House location, but a deal was signed on the property only two years ago. The building, which had been vacant for 12 years, was once rented by the Shin Bet and, according to unconfirmed legend, the interrogation of the captured Adolf Eichmann took place there.Once the property was purchased from the Greek Orthodox Church, further complications delayed the restoration of the building when Byzantine archeological discoveries were found during the renovations.“We had to build around it and, as according to the law, we had to make sure that the findings would be exhibited clearly and not covered up,” explained Eran.The result is a fascinating glass floor mosaic snaking around the hotel’s lobby, where guests can look down at the findings. The glass openings mesh nicely with the lobby’s inviting parquet floors and carpeting, enhanced by local art and shelves of books for perusal. Instead of a front desk separating the guest from the clerk, there’s just a desk and chairs, contributing to the friendly, informal vibe the hotel emanates.The rooms in the four-story hotel are magnificent – smartly decorated, spacious and fancy while still being homey and comfortable.The top floor features penthouses with huge terraces, while the second and third floors house the anything-but-standard standard rooms. Each room has a small balcony with table and chairs that offers a view of the sea or of the flea market down below, with a dazzling view of mosque domes, church steeples, roofs of Jaffa houses and the ancient port.For anyone wary of being bothered by the outside 24-hour-a-day cacophony, it’s amazing that the noise of the busy city outside can be totally blocked out simply by closing the balcony doors.One thing that should not be blocked out under any circumstances – even with the countless culinary and cultural attractions in the area – is the breakfast buffet served daily in the lobby. It’s one of the best I’ve sampled, with fresh baked good, fresh fruit and made-to-order eggs, providing the perfect start to a new day after the restful sleep we just experienced upstairs.About the only downside to the overwhelmingly positive experience of staying at the Market House is arriving at the Market House. Understandably, with its location on a narrow one-way street in congested Jaffa, parking is at a premium.Luckily, the hotel provides free parking in a nearby lot on Yerushalayim Street, less than a 300-meter walk from the entrance.However, especially if you’re not familiar with the surrounding streets, it could take a while to figure out how to get to the lot.But even a rocky start will turn into a smooth journey once you’re ensconced in the new pearl of the Jaffa flea market.Prices per night for double occupancy including breakfast start from NIS 750. The writer was a guest of the hotel.

Tags restaurants in jaffa
Advertisement
Subscribe for our daily newsletter