Gershwin’s plenty of something 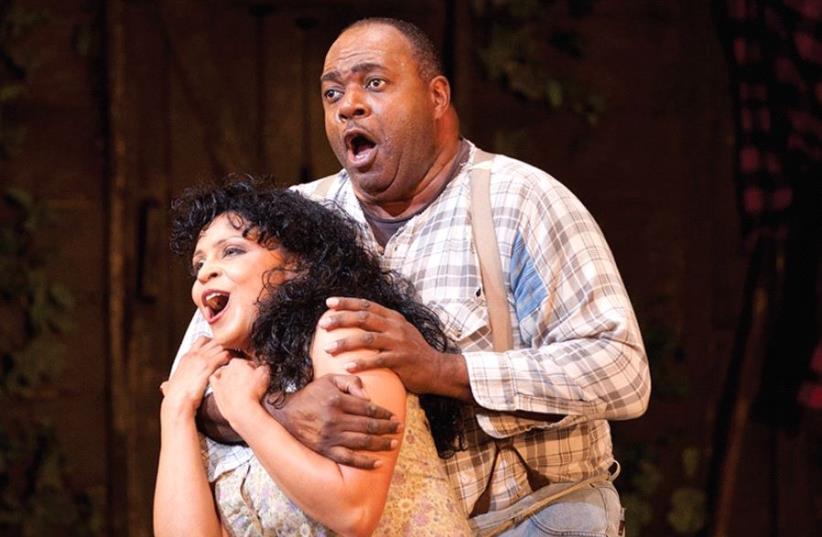 The New York Harlem Theater performs ‘Porgy and Bess’
(photo credit: L. ROMANO)
Advertisement
George Gershwin’s Porgy and Bess is a serious contender for a Top 10 place among the more memorable operatic works of the 20th century… if such a ranking system could at all be justified. It has spawned some of the most oft recorded and performed songs of the last eight decades. “Summertime,” for example, has been recorded literally hundreds of times in practically every style, while numbers like “It Ain’t Necessarily So” and “I Got Plenty O’ Nuttin’” have also done pretty well for themselves over the years.The aforementioned songs, and the rest of the Gershwin opera repertoire, will be deftly unfurled at the upcoming seven performances of the show in Haifa and Tel Aviv, starting on March 1. This is a production on the grandest of scales by the New York Harlem Theater, which will come here with a cast of 48 actors, singers and choristers, in addition to a 50-piece orchestra.William Barkhymer is the man at the helm of the production, although the 63-year-old US-born, German resident artistic director says it took him a while to get into the Gershwin piece.“We had a record of the soundtrack at home, and I heard it as a child,” he recalls.“After that, I didn’t really hear it at all for quite a few years.”Barkhymer eventually made up for lost time, and then some. As a young adult he relocated to Vienna to study music, and he encountered an American production of the opera that was playing at the Vienna Volksoper opera house. He was pretty impressed by what he saw and heard and soon got on board.“I got to know the American singers, and some wanted some coaching and needed a pianist. The person playing Bess was a woman who was actually married and living in Vienna. Her home wasn’t too far from the music school, so I used to go there for lunch and then I would coach her, and I continued coaching her even after the Porgy and Bess production was over. It was interesting for me, as an American, to see Porgy and Bess in Vienna,” he chuckles.At the time, Barkhymer was studying conducting in Vienna, after completing a music degree at Indiana University.Barkhymer notes that Gershwin, who was of Russian and Ukrainian Jewish descent, spent some time in the Austrian capital, which was a hotbed of classical musical endeavor, prior to composing the music for the opera.“There are lots of influences of European music in Gershwin’s work. There’s lots of contrapuntal, almost atonal – maybe dissonant – influences that you hear once in a while in Porgy and Bess. Maybe Gershwin got that in Vienna, I don’t know. But he wanted to learn as much as he could about composition. He went to Vienna, and he went to Paris to talk to [French composer and teacher Nadia] Boulanger. He was trying to find out anything he could, and he really wanted to become a classical composer,” Barkhymer says.In some ways, Porgy and Bess is something of an anomaly. For starters, it had an all-black cast of classically trained singers. That is not something most culture consumers of the 1930s would have encountered. And Barkhymer’s reference to non-mainstream musical intricacies, such as dissonance, would not have been part of the person-on-the- street’s normal musical fare. It seems that Gershwin, surreptitiously or subtly, introduced his unsuspecting audiences to some of the more obscure elements of 20th-century music.“That’s maybe why the critics didn’t know what to do with Porgy and Bess,” the artistic director muses.“Originally, it was praised by many critics and criticized by other critics in New York.”It seems there was also some disinformation going on.“If you read the newspapers of the time, it looks like it was a failure and was criticized by everyone, which isn’t true. But they really didn’t know what to do with it. It was on Broadway, it didn’t sound like classical opera, it didn’t sound entirely like a musical. It confused people back then,” he says.The opera did not, it must be said, initially rake in the millions and, after the initial run on Broadway, followed by a national tour, it took a few years for the public to fully embrace it. That was after Gershwin’s death in 1937, at the age of 38.“It was revived in the 1940s, with a lot of the music cut and more dialogue put in,” says Barkhymer.“People wanted to hear something more like a normal musical, with the same orchestration but with a reduced orchestra.”That first flush of success was followed by a State Department international foray in the 1950s, but it wasn’t until 1976 until the opera got another grand stage airing in its homeland.“They went back to the original opera version,” Barkhymer notes.Porgy and Bess withstood the early test of the critics and time, and is now performed regularly around the globe to packed houses. Barkhymer has been proffering the work to audiences all over the world for more than 15 years.“Gershwin was really a musical genius and is up there with many of the other musical geniuses we have had. He was certainly, by far, the best American composer. He just had this knack for, first of all, picking out a good subject matter and for putting all these musical styles together but without its sounding like he was stealing from other people. It sounded like his own,” he says.Music fans across the generations for the last eight-plus decades would go along with that, and the upcoming New York Harlem Theater performances will offer us all the color, pathos and musical magic created by the genius that was George Gershwin.‘Porgy and Bess’ will be performed on March 1 at the Congress Center in Haifa, followed by six shows at the Charles Bronfman Auditorium in Tel Aviv from March 3 to 8. For tickets and more information: Haifa (04) 837-7777 and www.barak-tickets.co.il; Tel Aviv *2207 and www.2207.co.il