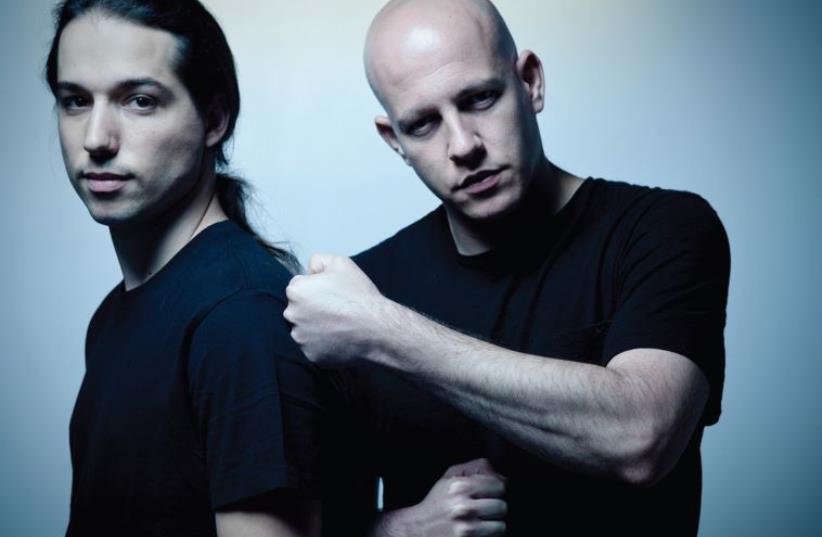 Infected Mushroom
(photo credit: PR)
Advertisement
Haifa natives Amit “Duvdev” Duvdevani and Erez Eisen are the dynamite duo behind Infected Mushroom.The partners pioneered Israel’s ever-popular psychedelic trance movement, changing the face of the local electronic music scene for decades to come. While they’ve relocated to Los Angeles to till the Psy soils in America – where the stages are bigger and the festivals are more massive – Duvdev assures, “There’s no place like home.”Since “the energy of the Israeli club-goers is second to none,” Duvdev and Eisen are returning to the Holy Land for the annual Boombox Festival on September 19 at Hadera Stream Park, featuring a platter of back-to-back performances by Israel’s tastiest DJ flavors, to toast the New Year in style.

The Jerusalem Post sat down with Duvdev to unearth the duo’s travels, triumphs and tenacity.Do you remember the first album you ever purchased? Dark Side of the Moon, Pink Floyd.When did music become more than just a passion?

We were both in bands as teenagers, and Erez was born in a computer, so it was during our early teens that we started to pursue it hard.If things hadn’t worked out, I was going to work in the family industrial business.

How did you two meet? A mutual friend who was a DJ in Israel introduced us. He said we should try to make something together. He was one of the first people who believed in our project.You are both classically trained musicians. What prompted your monumental shift from classical to electronic? The dance music scene was exploding at the time and we felt like it was the new punk music. We were really drawn to this culture.How would you define the psychedelic trance (“psy trance”) genre? Psy trance is typically categorized by a quick tempo, as well as organic & mechanical sounds creating a psychedelic feeling that tickles the brain.What other stylistic waters have you dipped your toes in? We have some hardcore fans who only like the old-school, purely “psy” style, but our sound has evolved over the years and we enjoy incorporating various genres such as breaks, electro, Dubstep and rock. Overall, the journey of our sound has been well received. If you don’t push the boundaries, you don’t grow as an artist.In your newest album, ‘Return to the Sauce,’ what sort of sauce are you returning to?This was a return to our roots. The album revisited our passion for psy trance. It had been a while since we made a project like this, so the time had come for a return to the sauce.Which of your tracks has truly impacted you?“Becoming Insane” is one of our most popular tracks. The crowd always goes mental and we like how the Spanish lyrics help to transcend culture. We see people of all races singing along and dancing like crazy.That’s what dance music is all about.

While the Israeli DJ scene has really been going above and beyond these past decades, you guys really set yourselves apart from the pack. What has given you that extra boost? Well, we’ve been at it for over 20 years now. The key is persistence and determination. We also allow ourselves to be influenced by the younger generation. This helps us stay current and relevant.

Who in the Tel Aviv scene do you admire at the moment? We love our HOMmega family; Astrix, Freedom Fighters, and even Riot (even though they are based in LA now).

What’s the craziest thing to ever happen on stage? The stage once collapsed midshow and the entire tech set-up fell apart. The crowd went mental until it came back together, then the party resumed like nothing ever happened.

What is your favorite performance of all time to date? Burning Man... pure vibe.You’re playing the Boombox Festival on September 19. What are you most excited about?Israeli artists are quality, and second to none. It’s always a pleasure playing with our homegrown talent, they know how to rock a crowd.Tell me a little about these grandiose sets and effects designed for your shows.We always like to incorporate visual stimulation. Whether it’s massive projection mapping, lasers, or moving mechanical LED mushrooms, it’s important to have a comprehensive audio-visual journey during a performance.You two pride yourselves on experimentation and innovation.Any surprises you’re bringing to the stage this week?We are bringing an unreleased sunrise set for the morning at Boombox... and, of course, we will sprinkle in the old goodies as well.What do you hope to gain from your performance here? We want to connect with the fans, and give them the night of their lives.

You two have been together for a long time and the electronic scene has developed vastly in that time. How do you feel your sound has changed over the years?We used to be purely psy trance, then we brought on a band, so we revisited our rock roots, and began to journey into rock trance.As the dubstep scene emerged, we also incorporated more bassheavy sounds. Overall, we don’t like to classify ourselves as one genre. We just try to make quality dance music that makes people go mental.As you know, the music industry is a mad world. With so many groups splitting up, what do you think it is that kept you two together all these years?Of course we have our arguments, but a partnership is about compromise.We both bring a unique set of skills to the table, so we are best when together.Have you two ever thought of splitting up?When you make a commitment to someone, you stick with it through thick and thin.What’s the most valuable thing you’ve learned in the industry? To never give up.What’s next for Infected Mushroom? Any new albums on the horizon?We’re always working on tracks, so yes there will be a new album for sure.Will you two ever stop producing and performing?If we can project 3-D holograms of ourselves onto a stage while staying in the studio, that would be great. But for the time being, we are here to stay.The Boombox Festival will kick off at Hadera Stream Park on September 19 at 9 p.m. and end when the sun rises and the last party-goer leaves. For tickets, visit: boom-box.co.il/index.
Advertisement
Subscribe for our daily newsletter