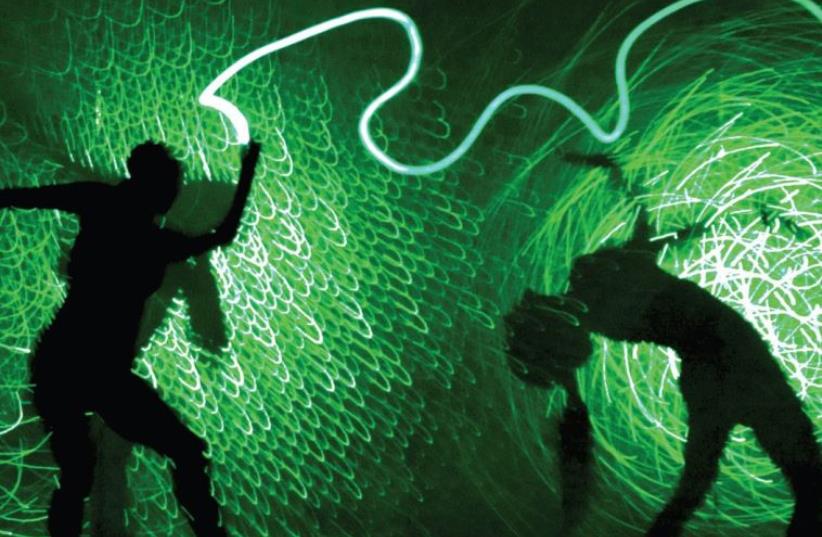 eVolution Dance Theater
(photo credit: PR)
Advertisement
With the summer coming to an end, the holidays are around the corner. This Succot, a special troupe will visit Israel for the first time. Italian company eVolution Dance Theater will provide a good excuse to get the whole family out of the house and into the theater. Presenting the international hit show ElectriCity, eVolution promises to wow audiences with its unique blend of movement, science and pyrotechnics. Performances will be held throughout the country, in Herzliya, Jerusalem, Petah Tikva, Tel Aviv, Kiryat Haim, Ashdod, Latrun and Beersheba.American choreographer and dancer Anthony Heinl founded the company in 2008. Although he has enjoyed a long career as a stage artist, Heinl didn’t always want to be a performer. Originally from Ohio, Heinl, 39, excelled in sciences from an early age.“I went to school for physics and chemistry,” he explains over the phone,” but I dropped out. I knew I didn’t want to be in the lab. I went back into theater and then started studying dance.”Along the way, Heinl was introduced to the work of Alwin Nikolai, an American choreographer whose illusion-based work set the stage for companies like Pilobolus Dance Theater and Momix Dance Theater.“I was going to be a dancer, and then I saw Nikolai’s work. He is the father of this whole genre. Before him, no one had ever done this kind of research and experimentation,” he says.Having fallen in love with Nikolai’s milieu, Heinl found himself working with Moses Pendleton as an artistic associate and member of Momix.“I got a great opportunity with Moses to create ideas, and a lot of them made it into the show. I saw how ideas go from the ether to a finished product. Moses is one of the best out there, in my opinion.He doesn’t rush; he waits until he has an idea he really loves to make a show. He taught me how to go after a concept, how to make something really interesting. I realized that I could do it on my own,” says Heinl.It was during one of Momix’s extended tours in Italy that Heinl decided to strike out on his own.“I just didn’t get on the plane back to the States,” he laughs. “I went to work with a company in the north with another ex-Momix dancer. I created a couple of more pieces after that on my own. One was good, another was terrible. I had never realized how difficult it was to run your own company. I thought it was enough to be a good chef, but it’s the difference between being a chef and a restaurant owner,” he explains.Eventually, Heinl found the right blend of dancers, technicians, tricks and illusions to make his mark on the Italian theater community.“It all came in handy – the base I had in science, physics, technology, magic and illusion. The trick is to turn those illusions into a performance, not just showing a bunny in a hat. You are watching dance, magic and physical theater together. I am trying to find a way for it all to make sense together,” he says, The creative process for ElectriCity included countless hours of tinkering with lasers, prisms and other new technologies, and then blending these elements into a cohesive production.“This show is full of wonder. All of the little pieces work, and there is a new surprise around every corner,” says Heinl.As for the target audience, Heinl believes that anyone, from very old to very young, expert in theater and newcomer, can enjoy the show.“I am trying to make the highest level of art and entertainment possible. I want to put my ideas out there and for them to be understood. My dancers have incredible training and abilities, and this production showcases them.ElectriCity is about that wow effect, those moments when you see something really interesting or crazy that make you curious about how it is done. I didn’t design the show to be a family show or a kid’s show, but it works for them. It’s psychedelic, or cyberdelic as we call it,” he says.eVolution Dance Theater will perform in Israel September 29 through October 6. For more information, visit www.evolutiondancetheater.com or www.bimot.co.il.