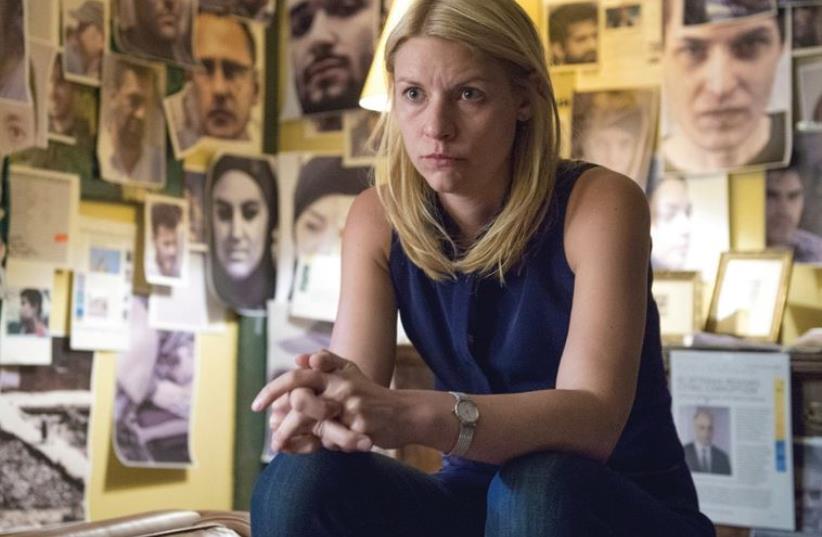 ‘Homeland’
(photo credit: PR)
Advertisement
The latest homegrown hit from Israel, False Flag (in Hebrew, it’s called K’fulim), from Keshet Broadcasting, which airs on Channel 2 on Wednesdays at 9 p.m., has already been purchased by Fox International for a US version. It was also purchased by France’s Canal Plus. It’s based on the true story of the assassination of a Hamas official in Dubai in 2010 by a team of spies who used forged copies of the passports of a group of ordinary Israelis, who apparently had nothing to do with the spy game.False Flag opens on the morning when these five Israelis find their identities all over the news and find themselves accused of carrying out the kidnapping of the Iranian defense minister in Moscow. Beni (Yishai Golan), a chemist and family man, is hiding his affair with one of the other passport holders, Emma (Orna Salinger), an artist. The incident comes to light the morning of the day Natalie (Magi Azarzar) is to be married. Her sister and fiancé hide the news from her as long as they can, and she goes through her bridezilla paces, blithely unaware. Asia (Ania Bukstein) is a preschool teacher with showbiz aspirations and is at first delighted by the sudden media attention. The fifth is a backpacker, Sean (Angel Bonnani), on his way home to Israel.But as innocent and bewildered as they all seem at first, none of them has a solid alibi. This twisty drama is addictive and fun. It started airing a few weeks ago, so if you want to watch it from the beginning, you can get the episodes for free at mako.co.il.Amit Cohen, a reporter for Ma’ariv who covered the actual news story, got the idea for the series and teamed up with producer Maria Feldman (Homeland, Fauda) to create False Flag.Almost every actor in Israel has appeared on Homeland. The latest is Makram Khoury, who just started a two-episode arc as an Iraqi source Carrie used to use, who knows a key piece of information that can help her now. Khoury, an accomplished film and stage actor who won an Ophir Best Actor Award for his role as a Greek Holocaust survivor in Magic Men, has appeared on US television shows before, notably as the head of the Palestinian delegation on The West Wing. His daughter, Clara, appeared on Homeland three years ago.Ukranian/Israeli actor Mark Ivanir also appears on Homeland this season as an increasingly important Russian baddie who seems to be behind the main plot twist (no spoilers here).Ivanir, who appeared in Schindler’s List, is best known in Israel for his leading roles in the TV series The Gordin Cell and in Eran Riklis’s The Human Resources Manager.

Israel is becoming an important part of the storyline this season, which focuses in part on the war in Syria.Again, no spoilers, but as the season goes on, a plot line involving Israel will become more critical.Homeland airs on Mondays at 5 a.m. and 10 p.m. on YES Oh, and on YES VOD.Most of the series we watch come from the US and England, but Europe produces good television, too. The Team, a series set in Belgium, Germany and Denmark, is about the investigation into three murders of prostitutes in each of these countries.Teams from the different nations work together to solve the crimes. This wellacted police procedural has gotten rave reviews wherever it has been shown. In tone, it’s similar to the original Prime Suspect series with Helen Mirren in the 1990s, gritty and intelligent.It will premiere in Israel on December 1 on HOT Plus and free on HOT VOD.