It all started back in 2015, when Fielder was still regularly wearing a jacket made by Taiga, a Vancouver-based sportswear company; he can be seen in it in many of his show’s early episodes. 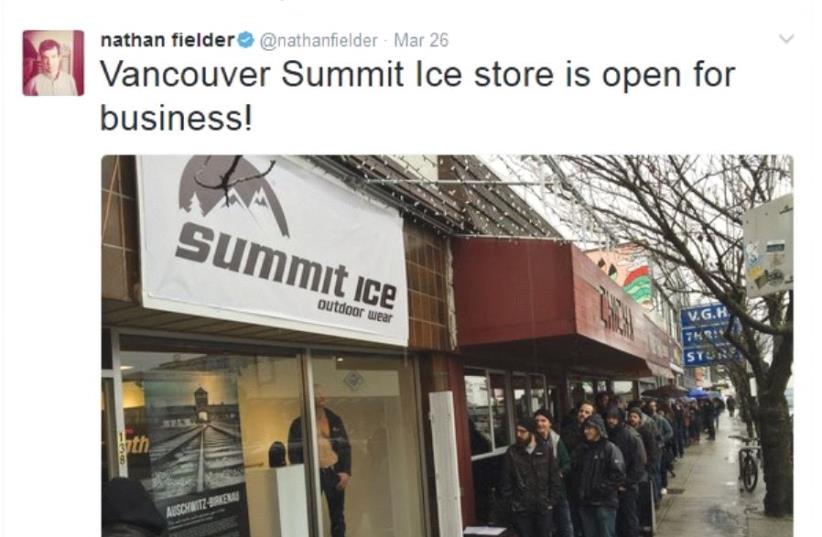 PEOPLE LINE UP to enter the new Summit Ice store in Vancouver, Washington, where they can trade in their old jackets and learn about the Holocaust at the same time
(photo credit: TWITTER)
Advertisement
Nathan Fielder, a Canadian comedian, is known best for his Comedy Central show Nathan for You.But the 34-year-old Vancouver native held a slightly different event this week, setting up a temporary “pop-up” store for his outdoor apparel brand with a Holocaust awareness theme – and donating $150,000 to the Vancouver Holocaust Education Center.It all started back in 2015, when Fielder was still regularly wearing a jacket made by Taiga, a Vancouver-based sportswear company; he can be seen in it in many of his show’s early episodes.But then Fielder, who is Jewish, discovered that the company had published a tribute in its catalogue in 2001 to Doug Collins, a Holocaust-denying Canadian journalist. The company wrote that the notorious Holocaust denier should be “admired, however grudgingly, for his lion’s courage in asserting and defending the rights of free opinion and free speech in these wimpy politically correct times.”Fielder stopped wearing the jackets and launched his own outerwear company, called Summit Ice. According to the company’s website, Summit Ice is a “not-for-profit company dedicated to producing quality outdoor apparel and raising awareness of the Holocaust.”On the late-night talk show Conan in October 2015, Fielder touted the merits of his company’s products: “The jacket’s water-resistant, it’s got a twoway stretch, it’s very breathable and, you know, that six million Jews did die,” he told Conan O’Brien. “We’re all about the quality and getting those facts out.”But he went one step further this week, launching the online-only store’s first-ever pop-up in Vancouver, covered in informational posters about the Holocaust. But they weren’t selling jackets – they were offering Vancouver residents the opportunity to trade in any Taiga jackets they have for a free Summit Ice windbreaker – and a pin that says “Deny nothing.”According to the company, “Any Taiga jackets collected will be disposed of in a manner deemed appropriate by Mr. Fielder.”On Tuesday, the Vancouver Holocaust Education Center posted on Facebook that it “thanks Nathan Fielder for his extraordinary support.”“Fielder’s Summit Ice initiative has raised funds that will allow the VHEC to deliver more programs to more people at a time when the center’s work is as relevant as it has ever been.”The company says all its profits go to the VHEC, and Fielder told CBC News that it has sold more than $500,000 worth of products since it opened.