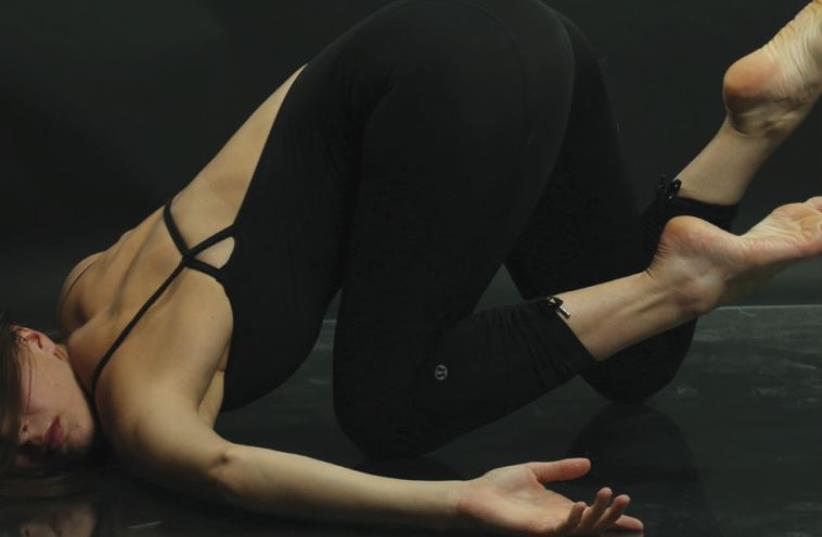 Maya Michlal Gelfand debuts ‘Bound’ with the Kolben Dance Company
(photo credit: BEN OMANSKY)
Advertisement
Maya Michlal Gelfand will be the first to admit that at many points in her three seasons with Jerusalem- based Kolben Dance Company, she was not her best self. “I didn’t always give my 100%,” she divulges over the phone. “I wasn’t an easy dancer in the company. I had ups and downs.”In the seven years since leaving the flock, Gelfand got married to Yonatan, became a mother to Michelle, got her studio off the ground and established herself as an up-and-coming choreographer. Each of these growths allowed her to look back at her time in Kolben Dance with new perspective.“Becoming a choreographer has allowed me to understand so much about that time. Doing this isn’t easy and it isn’t simple. I appreciate Amir more and more as time goes on. Now I am able to appreciate him, all that he gave me and taught me. I’m able to look at the full side of the glass.”It is late in the evening and Gelfand has just put Michelle to sleep. On top of her usual responsibilities of directing her studio in Nataf, Gelfand is in the throes of rehearsals preparing a new duet, Bound, for its Tel Aviv premier this weekend. The piece was commissioned by Kolben as part of an evening entitled Homage, in which six former company members present new dances that were inspired by or respond to their time in the company. Homage is a major part of Kolben Dance Company’s 20th anniversary celebrations.The evening was first presented in Jerusalem earlier this month and will run for two nights this weekend at the Suzanne Dellal Center’s Inbal Theater.Gelfand, 33, joined Kolben Dance Company ten years ago. She had recently graduated from the Jerusalem Academy of Music and Dance and was eager to begin her professional career. She describes her time in the company as “challenging, very difficult and amazing,” with extra emphasis on the last part. During her tenure, Gelfand danced a range of repertoire and was an integral part of several creative processes. When Kolben approached her to participate in Homage, she immediately thought of Noose.“Noose is a piece that really affected me, that made me want to dance for Amir,” she explains. “I only got to perform it a few times because we moved on to other works shortly after I joined the company, but that piece really impacted me.”To get started, Gelfand sat down for a heart to heart with Kolben. “I basically interviewed him. We talked about Noose, Hadir (Penetrable) and Charlie Mandelbaum, which was a piece that Amir made after I left the company. In all of these pieces, Amir deals with the idea of boundaries. I looked at it in terms of intimacy. What came out is a duet that talks about crossing, checking and expanding the borders of intimacy.”Bound is performed by Gelfand and longtime collaborator and esteemed dancer Tali Peretz. “Even though it is a duet performed by two women, there is a lot of play on gender and sexuality in Bound.”In recent weeks, Homage has become a topic of conversation and criticism in the local dance community. Fans applaud Kolben for extending a hand to emerging choreographers while others find flaw in the title noting that an homage is a gesture made by others not invited by the subject themselves.“You know, I planned my own bachelorette party,” says Gelfand. “I didn’t wait for anyone to do it for me. I knew what I wanted so I made it happen. I think that’s what Amir is doing here. He knew exactly what he wanted and he went for it and I think it’s wonderful.He has made that company live and breathe for twenty years and it isn’t easy. And at the end of the day, Homage is a gesture to us, the former dancers. Amir gave us this opportunity and he supported us throughout the process. I feel that this project has closed a circle between me and Amir.”Joining Gelfand in Homage are fellow former company members turned choreographers Joel Bray and Oded Ronen, Meirav Dagan and Stav Marin, Nadar Rosano, Maayan Zohar and Irit Amichai and Erin Shand.

Homage will run at Inbal Theater on May 20 and 21. For more information visit www.suzannedellal.org.il.
Advertisement
Subscribe for our daily newsletter