Bosmat Nossan presents her latest work at the Curtain Up Festival 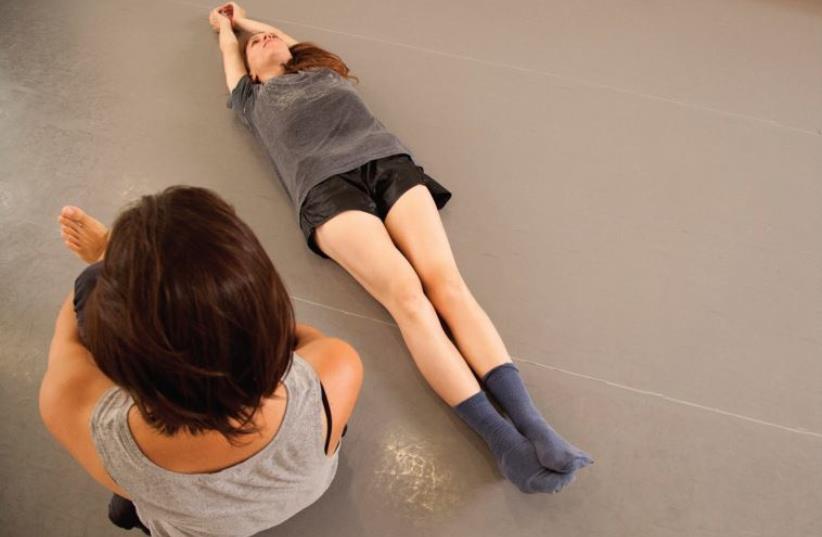 Bosmat Nossan's ‘In Vitro’
(photo credit: TAMAR LAM)
Advertisement
Bosmat Nossan isn’t the loudest, the most outspoken or outgoing of choreographers. She isn’t terribly concerned with promoting herself, and she gets a bit flustered when discussing her work. In spite of, or perhaps thanks to, her modesty and, over the past several years, Nossan has managed to put together a small but impressive repertoire of diverse pieces. This month, just a few weeks before setting sail for a residency at Ann Arbor’s Michigan University, Nossan will present In Vitro , her newest and most ambitious piece yet. Nossan began her career as a member of the Inbal Pinto and Avshalom Pollack Dance Company. She then moved on to the Batsheva Dance Company, where she performed for nearly a decade. She has worked with independent choreographers such as Iris Erez and Arkadi Zaides. She is one of the most charismatic dancers in Israel. Since 2011, when Nossan left Batsheva, she has focused on developing her choreographic skills. Her previous works include the trio Misfits, the solo Insect and the duet Hologram of Bruises . In Vitro, a quartet in which Nossan will perform, is part of the Ministry of Culture and Sport’s annual Curtain Up Festival, which will take place at the Suzanne Dellal Center and the Jerusalem Theatre. This year, the festival has two artistic directors – Hillel Kogan and Itzik Giuli. Nossan’s evening, which she will share with Ido Batash, was curated and mentored by Giuli. “I love this piece, but it’s very scary because I really went for it,” she says. “I wanted to work with ready- made images, pieces from culture and cinema that are charged with emotion. A scream from a horror movie, frames from Japanimation, a person being suffocated with a pillow. From these images, we wove a kind of montage. I think it came from a strong sense of randomness in the world. We see all these images, things that shock us, a dead Syrian child on a beach next to a glossy ad for hair removal. We can’t really respond to the horrible images because we are so used to seeing them. What we can respond to is the meeting of things, which evokes the most violence,” she says. Together with her formidable cast of dancers Gili Navot, Ariel Cohen and Ran Ben Dror, Nossan spun a web of moments. At one point in the work, Navot paints the wall. As her brush meets Nossan’s body, it instantly becomes a murder weapon, eliciting a gut- wrenching scream. “When we put the moments together a dynamic emerged, and this dynamic became the movement material. We are coping with drama. These are slices of reality placed one next to the other. Together they create a world that is familiar but foreign,” she says.The name “In Vitro” refers to the scientific process of creating life in a test tube. “What we did was take moments that moved us and put them in a cold environment that doesn’t respond to them, out of context. These things get trapped together, and something new evolves,” she explains.The end result of this experiment, which is currently being polished, is what Nossan describes as an “aesthetic panic attack.” She adds, “When you have a panic attack, at least as I have experienced it, you lose the relativity or proportions of things. Suddenly a glass is too big for the hand holding it, the ground too far away from your feet. I think that is what happens in this piece. We have this big, dramatic moments next to stillness.”To allow the audience access to this world, Nossan invested in set and costume design. On stage there is a white mountain, which has myriad functions throughout the work. Costume designer Kim Taitelbaum contributed an otherworldly edge to the dancers’ human responses with his abstract, animal- like silhouettes. “I enjoyed working with this group immensely,” smiles Nossan. “The input of my collaborators was invaluable to me. I was able to let my imagination flow in so many different ways, to touch on many levels of creation.” Nossan was free to explore and take risks during this process thanks to the support of Giuli. This is Nossan and Giuli’s second such process, as Nossan also participated in the 2014 Curtain Up Festival. “I don’t take what he’s doing for granted for one second. I think that an artistic director’s job is to choose the artists he believes in and to have their backs. Itzik isn’t concerned with success or failure but rather with allowing the artists to realize their vision.”‘In Vitro’ will be performed at the Suzanne Dellal Center on November 14 and 20. For tickets, visit www.suzannedellal.org.il.