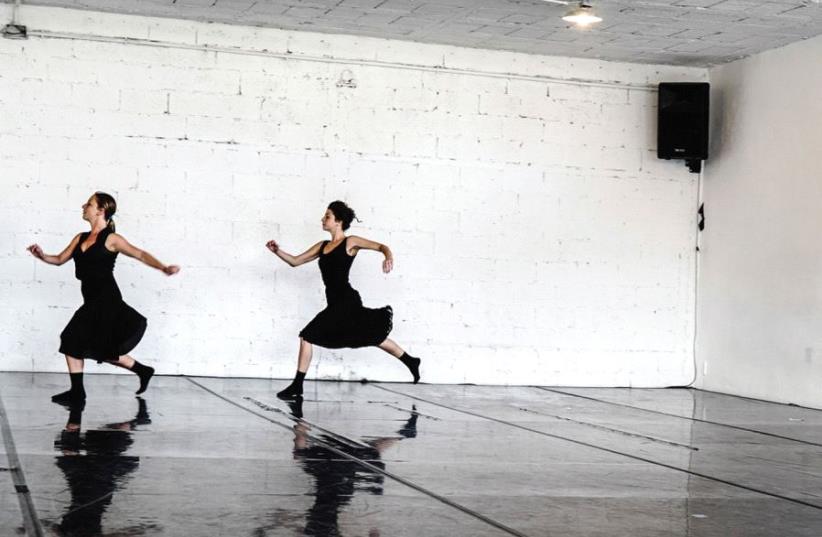 Inbal Pinto and Avshalom Pollak's ‘Icetree’
(photo credit: PR)
Advertisement
On the day that I joined Inbal Pinto, Avshalom Pollak and their cast of lovely dancers in the studio, the plan was to run the company’s new piece Icetree. The work is a combination of two segments: Rushes, which was created in 2007 for the Pilobolus dance company; and a new piece, created over the past several months as a new companion to Rushes.Everything was ready – the seven small white chairs, the two hanging curtains, one white, one gray, the props, the dancers and the music – but the run never happened. Instead, Pinto and Pollak found themselves stuck on a single moment in the piece, ironing out minute interactions and momentary transitions. It is this attention to detail that keeps the pair in the forefront of the dance world, that puts the polish on their silver, crosses every t and dots every I in their whimsical realm. Without their insanely keen eyes, Pinto and Pollak would not have established an esthetic all their own, would not have created one strange and scenic world after another and would not be making relevant work today.“Sorry,” smiles Pinto. “I am at this point in the process where things are constantly changing. Anything can happen now. Today, I came in with this clear idea of what I needed to try out.”One of these experiments includes asking two female dancers, Noga Harmelin and Moran Muller, to change their approach to the movement they are doing, army-crawling across the floor in front of the ever-present Zvi Fishzon.“They used to be part of a different world, but now I want them to be part of the same one,” explains Pinto.A few moments later, Pinto asks two male dancers, Ariel Gelbert and Amit Marsino, to play with ways of climbing over the chairs. Gelbert nimbly glides over in a semi-handstand. Marsino slides his slender frame between the chairs, attempting not to disturb the perfect line they stand in.A phone rings. It rings over and over. Its song becomes a backdrop, insistent yet forgettable. “The phone does so many things to me,” says Pinto. “It tells us that the time has come. Someone has to go answer it, something has broken or happened.”Pollak adds, “It’s a connection/disconnection, an excuse. It is something very important. This ring is actually a World War II recording of a phone from a war room, which is very relevant to this piece.”Another sound, a recurring theme in many of the company’s works, is a ticking clock.“There is waiting and the expectation of something,” says Pinto.Time has been a major theme in this process. In the 10 years since Rushes premiered in North America, Pinto and Pollak have been through a lot, professionally and personally.“There’s a question, if you want to go back there or not. We are in dialogue with our memories, with what started the journey back then, and it is comforting in a way. When I started to create, I related to music and movement in a different way. That newness doesn’t come back. This was, in some ways, an attempt to get back to it and get close to it again,” says Pinto.“Making another section for Rushes is a challenge. It’s not simple. It’s like making a plant sprout a new branch. It is interesting and frustrating,” says Pollak. “With all the insanity around us, how do we make a piece that we created years ago become something else without losing its heart? We give it many new hearts.”These hearts, it seems, live within each of the talented performers of this cast. Though certainly not in a lighthearted point in the creation process, the company’s energy was light. Smiles were adrift in the sunny air, and an eagerness to try out new things filled the room.“We identify with each and every performer on stage; we see ourselves in them,” says Pollak.

‘Icetree’ will be performed on July 20 and 21 at the Suzanne Dellal Center in Tel Aviv. For more information, visit www.inbalpinto.com.
Advertisement
Subscribe for our daily newsletter