Israel as a yoga canvas 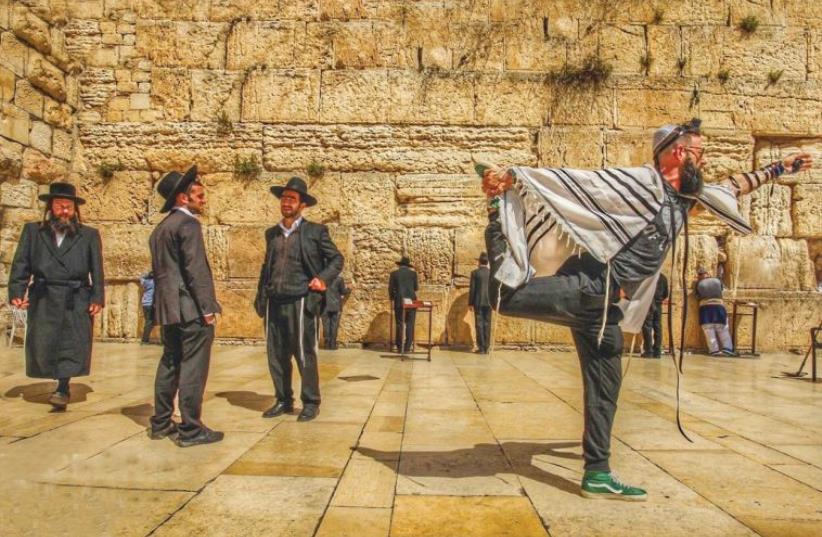 AMERICAN YOGA master Seth Kaufman doing yoga at the Western Wall in Jerusalem.
(photo credit: ROBERT STURMAN)
Advertisement
American art photographer Robert Sturman recently added Israel to his acclaimed portraits repertoire of yoga practitioners posing in asanas at different locations around the world.The 46-year-old artist from Santa Monica, California, has made a name for himself in capturing the beauty of yoga with his camera. From Africa to North America, Asia to the Middle East, Sturman photographs yogis on beaches, on streets, in prisons, at orphanages and in nature.“I wanted to see it, celebrate it and honor it,” Sturman says about why he decided to add Israel to his body of work. “I go all over the world to photograph, and what it does with the yoga poses integrated into the composition is it creates a beautiful story. It creates something sacred and I wanted to do that with Israel.”While fellow American art photographer Spencer Tunick trumpeted his arrival to Israel in 2011 for his Naked Sea project, Sturman’s visit here stayed pretty much under the mainstream media radar despite his being one of the world’s most renowned yoga photographers.But the yoga communities in Israel and the Palestinian Authority area were abuzz with excitement for his April visit.Like everywhere else he shoots, upon announcing his arrival, local practitioners contacted him to be part of the shoots. The models in his photos are a mix of people who sign up to meet him for a private photo shoot and others he meets randomly or through contacts.The 40 works from his Middle East trip feature a prenatal yoga instructor, a child trying yoga for his first time, Israeli and Palestinian yoga instructors, a fitness guru, a runner, a Rastafarian, a Hassid and an IDF soldier.“Humanity is beautiful. It’s just human beings, the poetry of us, that tell a story of humanity striving for excellence,” Sturman says about the message he’d like people to take from his works. “That’s a clear language in yoga: No matter what people you are, you’re doing your best. The soldier is in the same pose as the Hassidic man I photographed.”Sturman’s 46,000-plus followers on Instagram and nearly 60,000 followers on Facebook are posting favorable comments and emojis with every photo he shares from the shoots here.“Sturman ventures near and far to share his passion.His extraordinary expression of yoga makes him one of the most celebrated and adventurous yogis of our time,” Yoga Digest wrote about his works.And while most artists scout locations before setting up a portrait, Sturman – who has been twice featured by The New York Times – says he had an idea of the people he wanted in the background of his pictures but didn’t pre-organize locations.“This was not a tourist book where I had to hit everything. I was only there for two weeks. It was an exploration of what I could make happen while I was there,” he says of his visit to Jerusalem, Tel Aviv, Caesarea and Bethlehem. “The models and I just figure it out together.”Sturman never intended to dedicate his life’s work to yoga. After graduating with a BA in art from University of California-Santa Cruz, this artist-photographer continued his studies under Italian master painter John Torina.But then in 2000, Sturman set off for a trip to India and Nepal. According to his biography, he was “greatly moved by Osho, the Indian mystic poet and painter, and his principles of creativity, which soon affected his life as an artist and the responsibility that comes with it.”Three years later, a visit to the site of the Auschwitz- Birkenau concentration camp in Poland would change his life again. Sturman writes that this experience “reaffirmed the importance of assuming responsibility” for his life.And so, in 2003, he began to practice yoga to “make a personal transformation,” he told the Times, “but I noticed everything around me was so beautiful, and I started to make art of it. Yoga offered me an opportunity to change my life, but it was also something that was so beautiful to study, the poetry of asana. It started growing from being able to photograph people on the beach to being invited to a penitentiary with yoga programs to do yoga asana imagery there.”Sturman has shot portraits in different countries and among poor and affluent people.“There’s a lot of variations of yoga but I haven’t found much of a difference in poses,” he says. “Yoga tells the story of the heart, love, sincerity; it makes for beautiful art.”Sturman says Israel was on his radar for a long time, especially as he’s Jewish and hadn’t visited since the age of seven. He says the visit was profound and left him wanting to come back for more.“When it comes to just being an artist, who celebrates the poetry of yoga throughout the world, there’s no cultural divide. There’s no political talk.It’s very pure,” Sturman says of his April visit. “It was a lot of fun.”www.israel21c.org