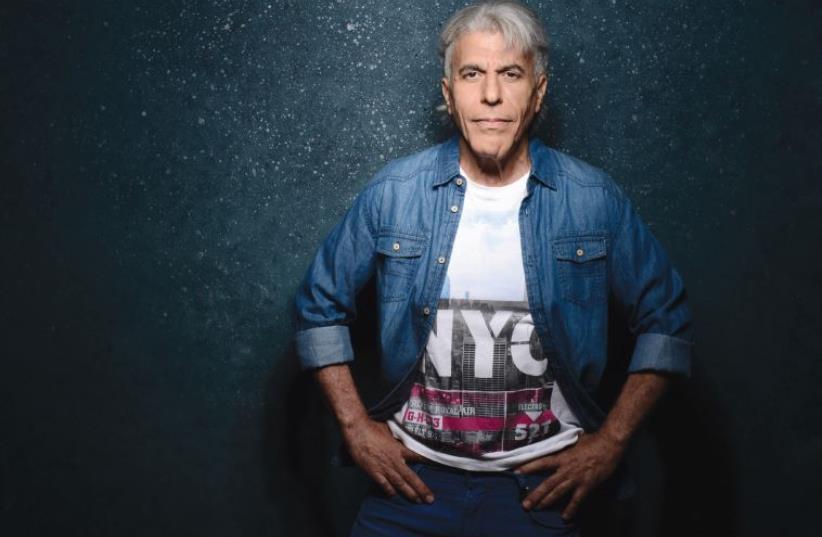 GABI SHOSHAN was best known for his string of hits during the early ’70s as well as his roles in iconic Israeli movies such as ‘The Policeman’ and ‘Kazablan.’
(photo credit: RONEN ACKERMAN)
Advertisement
Gabi Shoshan, one of the biggest names in the 1970s pop world in this country, committed suicide on Saturday. He was 66.Shushan, who produced a string of hits in the 1970s, including “Shesh Esreh Maloo Lana’ar” (The Boy Is 16), “Beresheet” and “Yalda Ketana” (Little Girl), was born in Morocco and made aliya with his family in 1955. His interest in a career in music was sparked by British star Cliff Richard and The Shadows, when he caught the 1961 musical movie The Young Ones.He took his first steps as a professional musician when he was still a teenager, with The Goldfingers, which also included singer-vocalist Nissim Seroussi. Shoshan soon began mixing it with some of the up-and-coming artists of the day who, like him, were to go on to become household names. These included Zvika Pik and Shuki Levy, with whom Shoshan performed in late Sixties outfit Hashokalada.Shoshan quickly began making his a name for himself in other areas of show business, contributing to 1970 comedy movie Lupo, which starred Yehuda Barkan, followed by a major role in the Israeli version of hit Broadway musical Hair, where he reunited with Pik. There were also roles in 1971 Oscar-nominated movie The Policeman, which starred Shaikeh Ofir, and 1974 box office hit musical-comedy Kazablan. Shoshan’s first record as leader, Na’ar Shachor Einaim (Black Eyed Boy) came out in 1973 and included several songs in English.Buoyed by his success here, Shoshan moved Stateside in the mid-’70s to try his luck in the American market. He made a living performing for ex-pat Israelis, as well as appearing in movies and commercials.Sadly he also became hooked on cocaine, but eventually managed to kick the habit.Several years later Shoshan noted that it hadn’t been the best of times in his life: “Not because of the cocaine, that was fun, but my money ran out. That was what was not fun about that time.”After close to a decade in the States Shoshan returned to Israel and quickly picked up where he’d left off, recording and performing self-penned numbers such as “Tekufot” (Eras), and “Al Hamezach” (On the Waterfront) written by Ehud Banai.Shoshan also appeared frequently on TV and in movies and also tried to relive his glory days by mounting the Gabi Shoshan Comeback show, which included a follow up to “Shesh Esreh Maloo Lana’ar” called “Shuvo Shel Hana’ar” (Return of the Boy).In 1998 he marked 25 years as a solo artist by releasing a new record, 16+1, and toured the country. He took part in the preliminary stage of the 2001 Eurovision song contest, and two years later joined up with fellow ‘70s pop star Uzzy Fuchs for another comeback venture. The project went well, and the pair performed intensively up and down the country. Shoshan kept the momentum going with the release of a compilation double album as part of the NMC Gold series.In recent years Shushan performed infrequently and was not in the best of spirits.The twice divorced father of two was living on his own in a small apartment in Holon but, once again, he was looking to reignite his flagging professional fortunes. Things appeared to be moving in the desired direction when, last year, he mounted a successful Headstart campaign to raise funds for a new album. At the time, Shoshan admitted to being wary of technology, but had overcome his reticence regarding the Internet.Happily the Headstart target was surpassed within 60 days and Shushan began working on what was due to be possibly his most personal project to date. The album was to be called Makom Leshinui (Room for Change), which may have marked a new turn in Shoshan’s personal and professional life.To date, four singles have been released and played on the airwaves, including the title track and “Lihyot Romanti” (Being Romantic), and he was planning on producing a new show based on the album.In a recent interview, Shushan said he was thrilled to be returning to the stage.“I have been waiting a long time for this moment and I hope I won’t disappoint. I have been collecting materials for the show and the album for a long time. Actually, I am letting the public in on the important stations in my life with this new record. I hope the public likes it.”