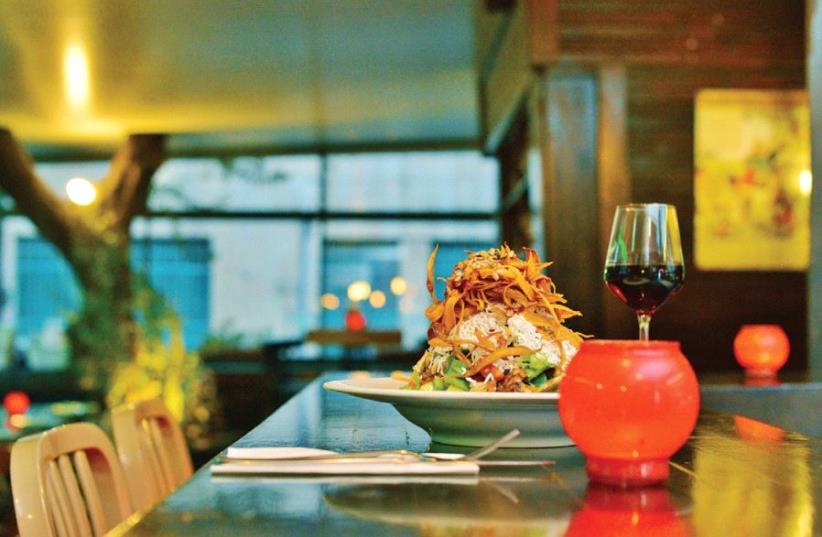 Pompidou restaurant
(photo credit: PR)
Advertisement
A vibrant addition to Jerusalem’s trendy restaurant row on Emek Refaim in the German Colony is Pompidou Bistro & Bar. Elegant but ultra customerfriendly, the spacious, tastefully designed restaurant has two levels of seating inside and two terraces outside, one of which is replete with tables and chairs, as well as plush sofas and elongated coffee tables, with large umbrellas to keep clients cool and comfortable.A unique combination of a Parisian–style resto that serves an Italian menu, Pompidou has all the charm and savoir-faire that Europe has to offer. In keeping with the French ambience, non-smokers be warned (and smokers be advised) that smoking is permitted on the back terrace.On a recent sunny afternoon, my dining companion and I had lunch at the much-touted eatery, which last year was awarded the prize by Kol Ha’ir for the restaurant that has made the biggest impact on Jerusalem.“We have changed the atmosphere on the street. At night, there is music and a young crowd.It’s more like the bar of a hotel,” explains 27-year-old Gal Noema, who co-owns the restaurant with his brother Aviran. “We love to host people,” he stresses. “Not just with food but with the whole atmosphere and environment.”That dedication to finesse was evident from the moment we sat down. As we perused the extensive menu, a basket of crusty bread and packets of butter was brought to the table, accompanied by a square cut-glass decanter filled with fresh cold water.As this was essentially an Italian restaurant, I wanted to sample two of my favorite Italian dishes – pizza and Caesar salad. Always on the lookout for good pizza in Israel, I am often disappointed. And I have learned never to order Caesar salad in this country, as it may be called that on the menu, but it is very rarely the real deal on the plate.However, Noemi assured me that their Caesar salad was authentic, so I took his word for it and took a chance. And, I am pleased to report, it was spot-on. The crisp Romaine lettuce laced with all the right Caesar ingredients definitely started the meal off on the right foot. (The wide selection of salads ranges from NIS 55 to NIS 62.) As for the mushroom pizza I ordered, it was studded with chunks of Porcini mushrooms and was very flavorful. In fact, I asked for some extra tomato sauce on the side, and that enhanced the flavor even more. (The pizzas range from NIS 58 to NIS 62.) In addition to appetizers (NIS 34-49), shakshouka (NIS 54-58), pasta dishes, including whole wheat fettuccini (NIS 57-64), daily fresh fish (NIS 64-104) and sandwiches (NIS 42-48), Pompidou serves an array of breakfasts from 8 a.m. to 1:30 p.m. (NIS 58-65).In that vein, the Eggs Benedict sounded so tempting, that my dining companion ordered a plate of that. Two perfectly poached eggs, each poised atop a soft sweet brioche, were bathed in a creamy béchamel sauce with Portobello mushrooms and topped with smoked salmon. Even after she finished the dish, she kept raving about it. As it was a breakfast item, it was accompanied by a mini bowl of yogurt with silan, muesli and slices of fresh fruit.We also sampled one of the specials of the day – potatoes au gratin: thinly sliced potatoes in a creamy sauce, topped with mozzarella cheese baked golden brown.And then came the real piece de resistance – dessert. For one thing, the dessert menu was presented in a small gold-edged glass frame. A nice touch. The delectable choices range from NIS 38 to NIS 44. We selected the lemon meringue pie and the crème brulee.The lemon meringue tart was just what one would hope for: flaky pie crust, tangy lemon filling and lightly browned meringue.And the crème brulee was baked to perfection, yielding the requisite crackling sound as the spoon broke through the caramelized topping to render the creamy custard underneath.I would have loved to sample the cheesecake, but they were out of it.Well, I’ll just have to go back when it’s available and enjoy another dose of the sheer joie de vivre that Pompidou has to offer.The writer was a guest of the restaurant.Pompidou Bistro & Bar Kosher (dalry)
27 Emek Refaim, Jerusalem
Tel: (02) 625-1111