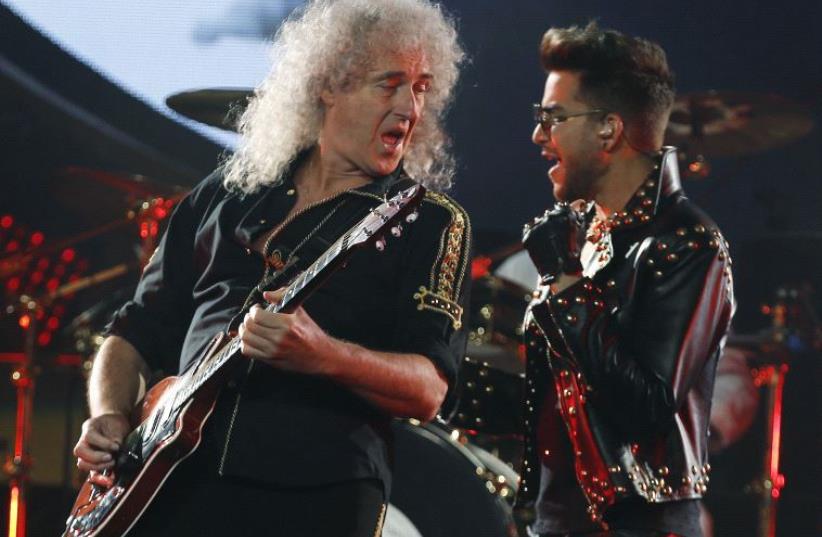 Brian May (L) of the band Queen and Adam Lambert perform during the opening night of their North American tour in Chicago, Illinois, June 19, 2014.
(photo credit: REUTERS/JIM YOUNG)
Advertisement
Expectations are high when a band sings an almost-eponymous song about being “dynamite with a laser beam, guaranteed to blow your mind,” but Queen has been managing to meet them for several decades.The classic rockers played Tel Aviv for the first time Monday night, with former American Idol Adam Lambert taking the place of legendary frontman Freddie Mercury, who died in 1991 of complications from AIDS.Mercury was a constant presence throughout the concert, with original band members Brian May and Roger Taylor each singing a song in his memory, and concert clips featuring the mustachioed frontman peppered throughout. About half of the performance of “Bohemian Rhapsody” was a screening of the band’s classic music video with Mercury’s voice, though Lambert sang some parts as well.Though he did not wear even one spandex jumpsuit, Lambert proved to be a worthy heir to Mercury’s throne – and even sat on an actual throne while singing “Killer Queen.”Lambert’s glam-rock style and flamboyant moves paired with a voice that could tackle anything Queen has to offer with aplomb have made him a seamless addition to the band for the past four years.Queen and Lambert went through all the hits over two hours, and the audience was enthralled, from the opening piano riff of “Seven Seas of Rhye,” through “Don’t Stop Me Now” and “Somebody to Love,” to the foot-stomping encore of “We Will Rock You” followed by “We Are The Champions.”“Fat-Bottomed Girls” seemed to be the fan favorite, with the audience singing every word. Though the song is 38 years old, it seemed au courant in an age when Kim Kardashian is the biggest star in the world, and it’s pretty surprising Nicki Minaj or Iggy Azalea haven’t sampled it yet.Of course, it wouldn’t be a concert in Tel Aviv without the singers pandering to the audience a bit. May played an extended guitar solo which included the rockingest version of “Hava Nagila” to hit the Jewish state, and, in a rarity at concerts in Israel, added an Arabic “salam aleikum” after his “shalom.”Lambert, who’s Jewish, seemed to have exhausted his Hebrew and Yiddish vocabularies with “shalom,” “l’chaim” (said while raising a chalice), “erev tov” (good evening) and “ma nishma” (how’s it going), plus griping “oy vey zmir” and “oy gevalt” about the weather.Tel Aviv humidity aside, Queen made good on its promise Monday night when they sang “We Will Rock You.” They did.