Lee Memphis King gets all shook up 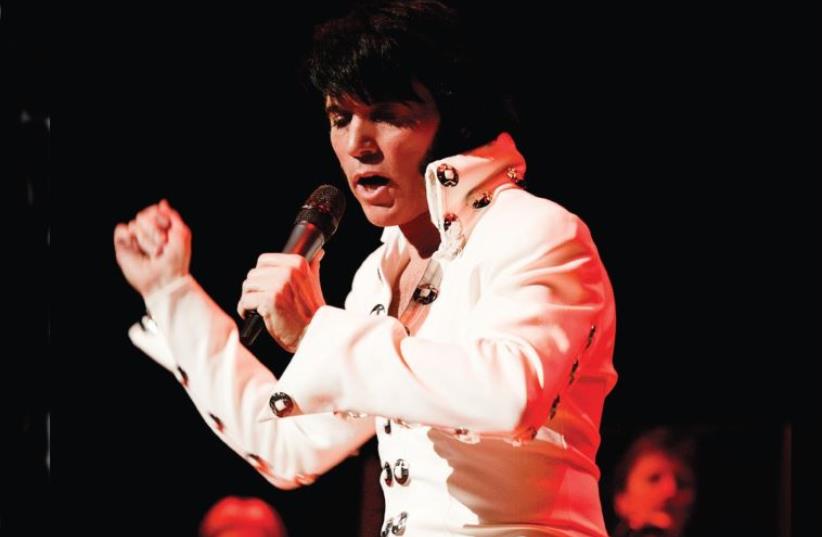 Elvis tribute artist Lee Memphis King
(photo credit: RICHARD WALTER)
Advertisement
Apparently, Elvis has not left the building – he’s just been hanging out in Manchester, England – the last place you would look, right? But that’s where 45-year-old Stan Lee, better known by his stage name, Lee Memphis King, has been honing the show that has won accolades for being the world’s best Elvis Presley tribute.Bearing a passing resemblance to the chiseled, black leather-era Elvis, Lee completes the transformation by effortlessly exchanging his Mancunian accent for a southern American drawl as soon as he starts to sing.“It’s kind of strange, but it’s like a switch that goes on about 20 minutes before the show where I start to become more focused,” said Lee recently, ahead of his first visit to Israel for four shows next month.“Then just before going onstage, it takes over completely and I become the character. As soon as I leave the stage, I leave the character behind and am myself again.”Lee and Elvis go back 40 years, when the impressionable five-year-old saw the Presley 1964 film musical Roustabout. He began to imitate the King’s highly individual style until it became something of an obsession.“When you’re a huge fan, you end up studying the source without even trying,” said Lee. “I watched his videos and movies, and read a lot about him. I feel like an actor studying for a part and getting into the personality of the role you’re playing.“Even back then, I had this desire to perfect his voice,” he said. “I also had an obsession to be onstage and show off.It’s been a lifelong drive and dream and it’s stayed with me forever.”However, that goal was delayed a long time – due to Lee’s introverted nature which prevented him from joining bands as a teen or mixing with other musicians.“I didn’t know anyone else who was into music or even into Elvis. I just didn’t mix with anyone else,” he said.“But as time went on, the urge to get on stage and perform was greater than my fear of doing it.”It took Lee until the age of 35, though, to leave his day job as an accounts manager and begin performing his Elvis tribute, a term he prefers over impersonator. And in the last decade, he’s performed nonstop, throughout the UK and much of Europe.Like most Elvis aficionados, Lee finds Presley’s 1968 comeback TV special to be a watershed point in his career. The first time Elvis had appeared onstage in seven years (following a string of increasingly sappy movies and a stint in the US Army), the show presented the Elvis that captured the minds and bodies of the world a decade earlier.Presley, playing guitar and appearing energetic, sits in a semi-circle with his band of crack players (including the recently deceased Scotty Moore on guitar) for a set of blues and country-based rock & roll, including “That’s All Right,” “Heartbreak Hotel” and Jimmy Reed’s “Baby What You Want Me To Do.”The show reestablished Presley as the King, and not a washed-up oldies act, and Lee bases the first half of his tribute show to that performance.“That was Elvis at his peak, and we authentically recreate the set, with the band sitting in a circle. It’s still pretty exciting for me,” said Lee.The second half of the show sees Lee’s band expand to 12 players (including a brass section and backup singers) for a colorful romp through Elvis’s rhinestone jumpsuit Las Vegas years, but without the weight gain.“People tend to look down on that period, but he still had the magic,” said Lee.“Of course, he was obviously ill and maybe he shouldn’t have been on the stage. But whatever he had at the beginning, he still had at the end – he still had so much charisma and was still fascinating.”Sometimes, Lee’s act is so convincing that fans find him fascinating and have a problem differentiating between the Elvis lookalike on the stage and the iconic pop culture icon. But he’s learned to take such awkward encounters in stride.“My act is an interpretation of what I’ve heard and seen over a lifetime of studying Elvis,” he said. “It’s true that sometimes fans treat me like I’m Elvis.Usually, I don’t really think about it and just do what I do, but when I see fans get all nervous in front of me, I remember that is how some people perceive me, and it’s an eye opener.”When it comes to Lee Memphis King, some fans just can’t help falling in love.Lee Memphis King is performing on August 3 at the Congress Center in Haifa, and August 4, 5, 6 at the Mann Auditorium in Tel Aviv.‘WHEN YOU’RE a huge fan, you end up studying the source without even trying...I feel like an actor studying for a part and getting into the personality of the role you’re playing,’ says Elvis tribute artist Lee Memphis King. (Richard Walter)