Mannequins are the medium

’From her wooden sleep’ is on display in Tel Aviv. 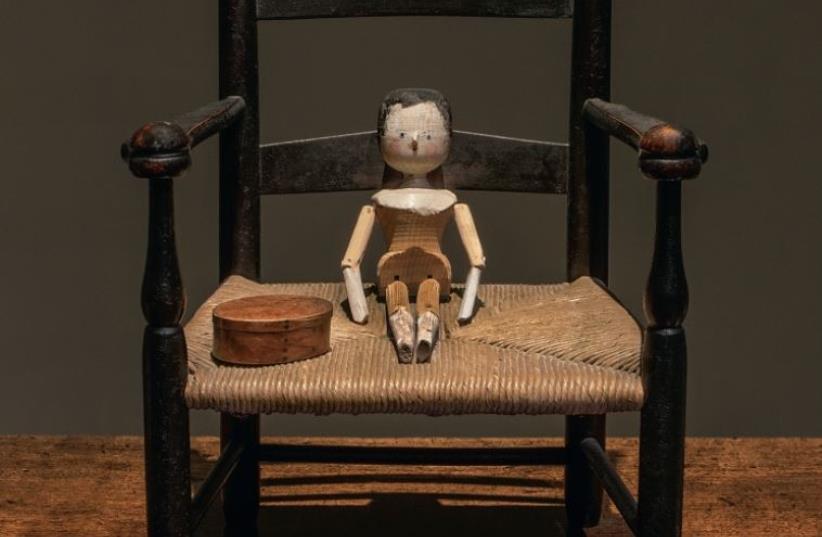 ’From her wooden sleep’ exhibition
(photo credit: ROBERT KEZIERE)
Advertisement
There is always something special about getting your first taste of a new art exhibition. There is a sense that someone invested his or her blood, sweat and tears in what you are about to witness. Calling it a sacred moment might be stretching the religious analogy a bit far, but when I stepped into Ydessa Hendeles’s exhibition “From her wooden sleep….” at the Helena Rubinstein Pavilion in Tel Aviv, I had a tingling sensation. It felt as if I were being given a glimpse of what Hendeles has been through in her life up to that precise moment.The 67-year-old award-winning Canadian is certainly an artist; but, as the show clearly conveys, her interest in the arts extends deep into the realms of collecting and curating as well.“From her wooden sleep…,” curated by Suzanne Landau, is a captivating work that comprises a multi-stratified installation. The timber textural central theme takes on a range of forms and shades, and it pops up in all kinds of surprising contexts.Christianity gets an early shout in the lineup in the opening Veil of Veronica section, referencing the legend which holds that the eponymous woman wiped Jesus’s face clean as he was making his way to Calvary, where he was crucified. According to tradition, Jesus’s likeness was subsequently imprinted in the cloth. Hendeles cites the take with three items from the 17th century – two dark wooden ecclesiastical panels and a miniature oil painting.Hendeles’s initial venture into the field of art was as a collector. It is as if she felt the need to accrue a solid tangible base before she could proffer her own creative input.Hendeles was born in Marburg, Germany, in 1948 to Polish-Jewish parents who went through Auschwitz. The family emigrated to Canada when Hendeles was three years old. She was an only child.You get the impression that the latter familial detail probably informs some of her work as you hit the main exhibition spot and suddenly feel a pulse surge as you encounter a breathtaking collection of 19th-century wooden mannequins from various places around Europe, arranged in all manner of pose and company. There are pairs of adult mannequins set on either side of smaller models, which probably allude to Hendeles‘s childhood.“Hendeles’s personal history, having two Holocaust survivor parents, impacts on her work, although not all of it,” notes exhibition associate curator Ronili Lustig Steinmetz. “You can see the undertones of that; but from Ydessa’s point of view, that is not the whole story of the exhibition.”There are clearly all sorts of narratives and subplots to the exhibition of both generic and highly personal hues. The exhibition title comes from late 19th- early 20th-century American-born English cartoonist and author Florence Kate Upton’s children’s book The Adventures of Two Dutch Dolls and a Golliwog.The story and, consequently, the exhibition have some sociopolitical background. The book recounts the nocturnal adventures of two wooden peg dolls, while Golliwogg was the first black protagonist in English picture books. He became a much-loved character among children, who were oblivious to its relationship to prevalent racial stereotypes considered acceptable at the time.Considering her Holocaust connections, it is likely that Hendeles is sensitive to the problems of racism evoked by the doll. Upton also nimbly trod the gray area between pop culture and high art, and her dark-skinned toy character also provided the inspiration for the closing movement of Claude Debussy’s Children’s Corner 1908 suite called “Golliwogg’s Cakewalk.” The musical piece in question plays over the sound system at the exhibition.All told, Hendeles has accumulated more than 150 wooden mannequins, most of which are on display at the Helena Rubinstein Pavilion. They are arranged in some kind of social or community order to create ersatz families and take Hendeles’s frequent examination of the concepts of difference and diversity a step further. Over the years, the artist has looked at the way representation and distortion, appropriation and assimilation can color individual and group identities.There are other models on show too, as the thematic strand meanders its way into more less clearly defined areas of intent. One intriguing threesome, for example, sits on a wooden bench that may hail from a church environment. The middle mannequin, the smallest of three that may be the adolescent child of the other two, gently clasps a wooden bust. You get a sense of empathy from the intriguing juxtaposition; and, once again, it gets you pondering family dynamics.The main exhibition area also takes in some delightful period furniture pieces and musical instruments. The latter include banjos, which entered mainstream culture in the mid-19th century, largely as a result of the popularity of white “negro impersonators” – another Hendeles reference to stereotypical thinking.Theology reemerges with the closing part of the exhibition as you come across a crypt-like layout with yet another 19th-century wooden mannequin appearing to lie in state in a locked glass cabinet. Another model which sits on the floor, leaning against a nearby wall, appears to have some relationship with the encased prone mannequin, but you can’t really be sure.“From her wooden sleep…” is a deftly choreographed exhibition that draws the eye and also tugs at the heart.The exhibition is on display until October 24 at the Tel Aviv Museum of Art’s Helena Rubinstein Pavilion. For more information: www.tamuseum.org.il.