Marrakesh by the sea

The flair and flavor of Morocco are evoked in Netanya. 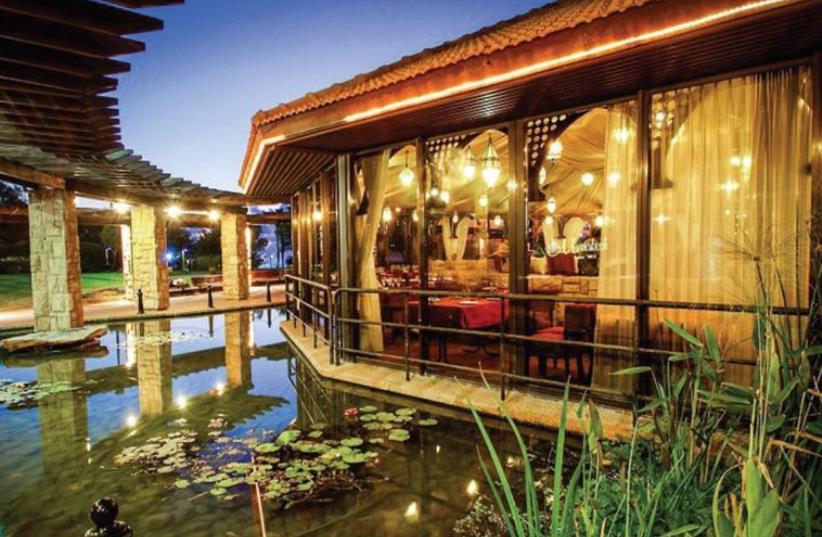 Marrakesh.
(photo credit: Courtesy)
Advertisement
Marrakesh is a city in Morocco that once had a sizable Jewish population. It is also a kosher restaurant in Netanya, on the seafront, which recreates some of the atmosphere of its namesake.Walking into Marrakesh is like entering a huge Beduin tent. Drapes across the ceiling create what looks like an enormous marquee, while colored lanterns suspended from the top of the tent cast a warm glow.Richly embroidered cushions lie on carved seats around the walls.The food, ostensibly North African, has a strong French influence; and the extensive menu, printed in Hebrew, French and English, offers something for every taste.I visited the Marrakesh restaurant recently and was transported to another world, gastronomically speaking, as well enjoying the exotic setting. The menu includes Moroccan specialties such as pastilla – little packets of filo pastry filled with chicken, nuts and raisins and strongly flavored with cinnamon. It also lists “Moroccan mix,” which is composed of those parts of meat of which the animal, when alive, had the least reason to be proud, in the immortal words of Charles Dickens.Fortunately, the menu offers plenty of choices for more conservative stomachs.My dining companion and I began our meal with a selection of salads. There were nine salads for the modest price of NIS 15. All were wonderfully fresh. Some were spicy, some bland, but all were very acceptable. We had Moroccan carrot, beetroot, three kinds of eggplant, cabbage, fennel, potato and a marvelous tangy madbucha.To help the food along, our wonderful waitress Zoya brought a bottle of Galil Cabernet Sauvignon 2012, a rich mellow wine without a hint of acidity. We quickly learned that Zoya, who has worked at Marrakesh for two years, is filling time until she can take up her position as a doctor at Beilinson Medical Center.For the main course, I chose beef in mushrooms (NIS 90) with rice. The meat was as soft as butter (pardon the metaphor), and the rich gravy was begging to be mopped up by the Moroccan bread. It was called “freya” but was suspiciously like focaccia. My companion had his favorite dish – lamb tagine with dried fruit (NIS 130). Since all that was left at the end of his meal was one small bone, I assume it was a good choice.For dessert we were served mint tea in elegant glasses and were able to taste the excellent chocolate mousse cake – light and fluffy with a rich chocolatey flavor, just the right touch of sweetness to end a good meal.Zoya also brought us some small dishes of Moroccan confiture – sweet raisins and apple compote. There were several other dessert choices, such as fruit salad and parve ice cream.Marrakesh has a two-course business lunch for NIS 65 and can cater parties for up to 150 people.With its location right on the seafront and off the central square, its varied menu and talented chefs, Marrakesh is definitely a winner.

The writer was a guest of the restaurant.Marrakesh
Kosher
5 King David St., Netanya
Tel: (09) 833-4797
Sunday to Thursday, noon to 10:30 p.m. Friday, noon until start of Shabbat.
Saturday night after Shabbat.
Advertisement
Subscribe for our daily newsletter