The movie got plenty of laughs at the press screening and the first reviews were good. 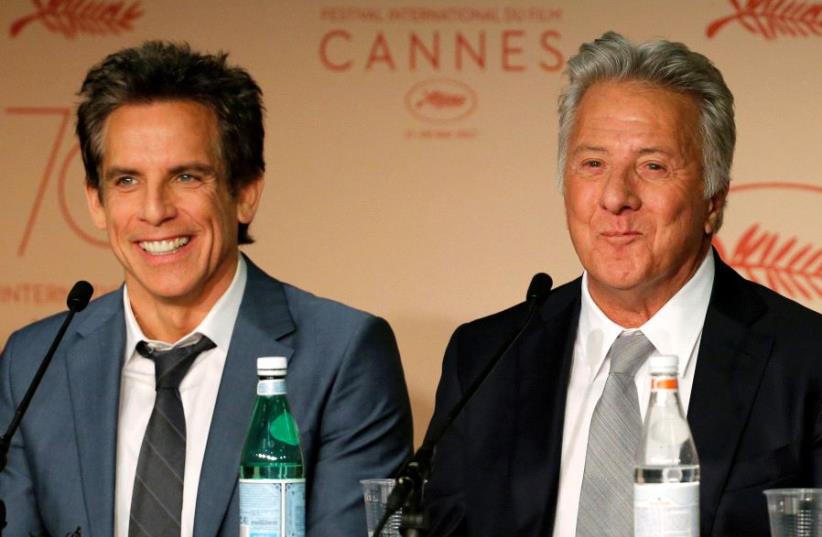 "The Meyerowitz Stories"
(photo credit: REUTERS)
Advertisement
CANNES - Ben Stiller once again plays Dustin Hoffman's son, this time alongside Adam Sandler in an intellectual comedy that Hoffman hopes audiences will find funny rather than just "interesting."The Meyerowitz Stories, which screened at Cannes on Sunday, is written and directed by Noah Baumbach, whose dialog-heavy New York movies are often compared to mid-career Woody Allen. This is no Meet the Fockers.About the fractured relations between Hoffman's four-times married almost-famous sculptor and his offspring, Meyerowitz is a long way from the knockabout comedies that Sandler and Stiller are best known for."I just think it's cool to hear Happy Gilmore mentioned at Cannes," Stiller said after the lowbrow 1996 golfing comedy in which he co-starred with Sandler was mentioned at the festival news conference.Hoffman, who soared to fame in The Graduate in 1967, said he resented people telling him they grew up with his movies, and although reluctant to play the aging Meyerowitz, was delighted to be directed by Baumbach."We would work for him for nothing," he said, to which Emma Thompson, who plays his wife, retorted: "We did work for him for nothing!"When a journalist prefaced her question by congratulating the filmmakers on an "interesting" film, Hoffman chipped in: "That's not a good word ... you really didn't like it!"But the movie got plenty of laughs at the press screening and the first reviews were good."A Great Adam Sandler Performance Makes The Meyerowitz Stories One of Noah Baumbach's Best," said IndieWire.The Guardian's Peter Bradshaw called it "terrifically pleasurable and entertaining – film-making qualities that look easy but aren't – and there is real charm, delicacy and warmth."A Netflix film, one of two in competition at Cannes, Meyerowitz will not get a full cinema release, a source of controversy at the film festival where jury head Pedro Almodovar said he did not think a film not shown on the big screen should get a Palme d'Or.Stiller was unfazed: "He said that about Happy Gilmore!"Baumbach, who said he made Meyerowitz to be shown in cinemas, joked that the movie would be screened in Hoffman's living room, which, the actor said, had "a very big screen."