Men of the hour:Itzik Galili 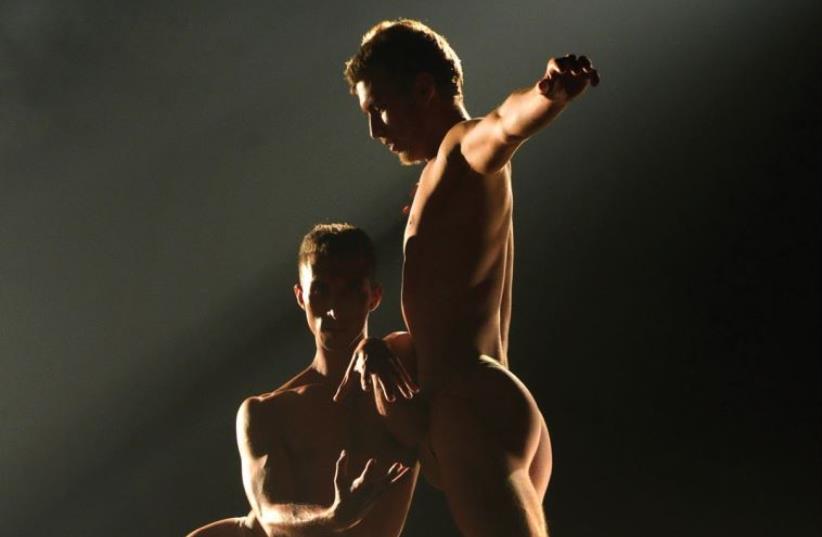 Itzik Galili's 'Men of the hour'
(photo credit: YOSSI ZWECKER)
Advertisement
‘Exhaustion is, after all, a passing state,” says Itzik Galili. Seated at the front of the spacious dance studio in the Opera House in Tel Aviv, Galili is surrounding by the male dancers of his newest work, Man of the Hour, which is a joint production of the IsraeIi Opera and the Suzanne Dellal Center. The eight men had, for more than 60 minutes, jumped, lunged, turned, lifted, shouted and sang. As they caught their breath, Galili spoke to the small crowd of guests invited to preview the work. Just a couple of weeks away from the premiere, Galili continues to tinker with the piece, adding new sections and polishing existing ones.There is no question that this work is extremely demanding. The dancers, though clearly in top shape, struggled to reach the end, leaving the studio floor awash with sweat.“I am very drawn to that place of release that comes from fatigue. I want this work to be exhausting for them and for the audience, to push it to the absolute limit. Only then does another quality emerge, and that quality is of great intrigue to me,” he says.Galili is a practiced pro when it comes to choreography. He has been in the business for ‘MAN OF THE HOUR’ (Yossi Zwecker) highlights events movies television radio dining more than two decades and has presented work all over the world. Born and raised in Israel, Galili spent much of his professional life at the helm of NND/Galili Dance in Groningen, Holland. In 2009 he moved south to Amsterdam, where he co-founded Dansgroep Amsterdam with Kristina de Chatel. Surrounded by canals and bicycles, Galili found himself longing for home, so after a few years he returned to Israel.Last year, fresh off the plane, Galili set an existing work from his repertoire on the Beersheba-based troupe Kamea Dance Company.Tel Aviv City Mouse recently nominated the piece, Things I Told Nobody, for the Best Dance Piece of 2015.Man of the Hour is Galili’s first new work since returning to Tel Aviv and is, by all accounts, an ambitious production. Eight dancers, two female opera singers and hundreds of lights will come together to realize Galili’s vision, a commentary on maleness and Israeli society.Early on in the piece, the cast comes together at the front of the stage, gesturing and shouting in a mishmash of languages. The subtext is clear: aggression.“It’s very hard for me being here, seeing the violence in everyday interactions. Like a glaring sun on a winter’s day,” says the choreographer.In Galili’s recent works, there is a theme of small white lights. In the opening vignette of Man of the Hour, one dancer is on the floor, covered in lights and cables. He slowly makes his way downstage as the lights drape over his torso. Later, each dancer takes his own light, playing with illuminating different parts of his body.“I became interested in lighting in 2002 and have been working with these fixtures ever since.If there is one thing that I am a control freak about, it’s lighting,” he says.Galili has worked closely with lighting designer Yaron Abulafia for many weeks, testing different kinds of lighting on and off the stage.Though Galili has a certain narrative in mind for the work, the overall sense is that Man of the Hour is an homage to the virtuosic capabilities of the eight dancers. Galili seems to be particularly taken with Igor Ptashenchuk, a promising young performer. Ptashenchuk opens the work with a solo and closes it in a duet with Tomer Pistiner.Seasoned dancer Alon Shtoyer has sparkling moments in Man of the Hour, while the equally accomplished Erez Tzemach reveals a surprising gift for beat-boxing.“The dancers are a goldmine; the colors, a reflection of my limits, of what I cannot see,” Galili says. “Each dancer brings a different element in the creative process, made of body and soul, far beyond what is expected of the traditional knowledge of a dancer. The work becomes themselves and, with it, the requirement of a rich range of movement.”‘Man of the Hour’ will run at the Tel Aviv Performing Arts Center on December 2 and 3 and at the Suzanne Dellal Center on January 25 and 26. For more information, visit www.israel-opera.co.il.