The show goes on again Wednesday night in Caesarea. 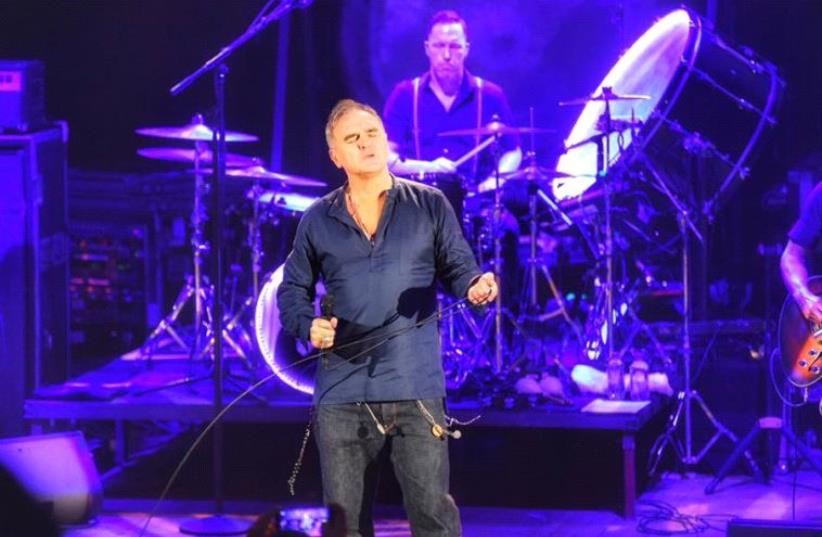 Morrissey concert in Tel Aviv.
(photo credit: LIOR KETER)
Advertisement
Morrissey, the former front man for beloved British rockers The Smiths and a longtime solo hero himself, arrived onstage at the sold-out  Bronfman Auditorium in Tel Aviv Tuesday night in fine form.His adoring fans were treated to his melancholic dream world serenades drenched in nostalgia through a 90-minute set. Before opening with his personal anthem,  "Suedehead,"  Morrissey charmed the crowd with a coyish "ma nishma?" (How are you?). The tune, like much of the material, had a much older and wiser feel  to it than the original – marked by his deeper and well-worn, yet still distinctive, voice.The rest of the show seemed to feature less of his tried and true classics from his decades of output and instead focused on his more recent oeuvre. That didn't seem to dissuade the crowd of not-quite millennials and Gen-Xers eager to relive old glories or heartaches of days past through the music of the king of mope. Many of them were clad in Morrissey or The Smiths t-shirts and stood in full attention, quietly mouthing words and swaying wistfully to the music. A somewhat spiritual experience in the White City, only a handful of audience members covered their faces with the obnoxious light of their cell phones.For someone in his late 50s who experienced some health issues recently, Morrissey knows his limits as a performer and doesn't go out of his way to be anything that he's not. He's growing old gracefully and giving the crowd everything he's got without trying too hard to pretending he's still a slinky lad in his 20s.One nod to his past was his penchant to still whip his microphone cord  in his signature style, and as usual, he couldn't hold back from providing  some clever quips between songs:"My opinion is that life is a joke, but nonetheless we all must love,” he said at one point, to which an audience member screamed back,  "we love you!" That led to some profane-filled tirades against the Israeli government from another audience member, which Morrissey handled with aplomb.Back to the music, "World Peace is None of Your Business” was gut wrenching and seemed to have struck a personal chord with everyone in the room with blaring distorted guitars and explosive blasts of percussion played over his humble pleas "no more, you poor little fools.. let there be no war."An hour into the show, Morrissey bludgeoned the audience with an aggressive rendition of The Smiths classic  “Meat is Murder,” which he sang with the same fervor as a teenage girl recently converted to veganism. The performance came complete with bright red lights blaring at us while a giant screen overhead showed gory footage from a selection of slaughterhouses, mostly those of the kosher and halal varietals throughout the US and UK.The pounding and explosive drums and screeching cacophonous guitars evoked the incessant moans and screams of dying animals, while he accusingly shouted the words to the song “as you savor the flavor of murder...KFC is murder." This went on for nearly 10 minutes as the screeching guitars devolved into a weak whimper, the stage went black and the screen posted a sign in Hebrew reading "Meat is Murder"Still a bit jarred from the previous full body experience, I had a hard time fully enjoying the next song, the more delicate gem "Every day is like Sunday."  Morrissey concluded the final 30 minutes of the show in somewhat passable fashion and left us with a one-song encore of “Irish Blood English Heart.”The show goes on again Wednesday night in Caesarea.