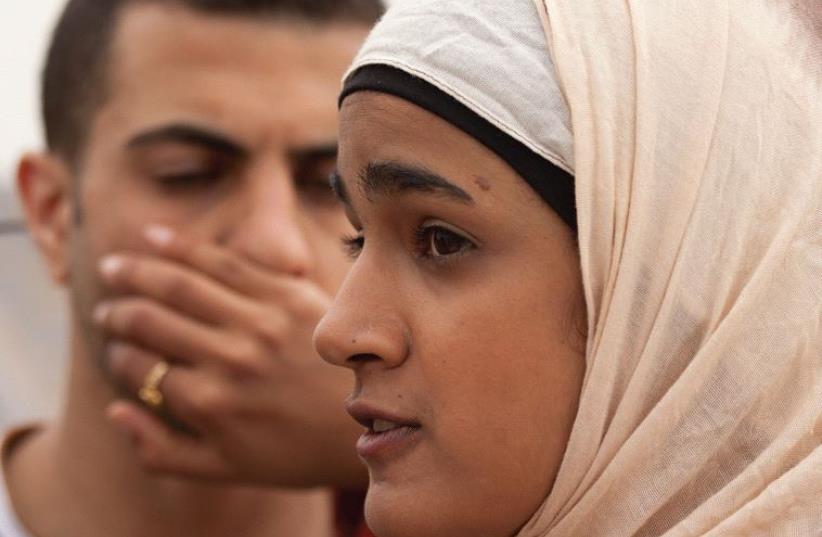 ‘Sand Storm’
(photo credit: PR)
Advertisement
SAND STORMHebrew title: Sufat Hol Directed by Elite Zexer With Lamis Ammar, Hitham Omari, Ruba Blal-Asfour Running time: 87 minutes In Arabic. Check with theaters for subtitle information.A fascinating glimpse into the lives of Bedouin women, Elite Zexer’s Sand Storm reveals drama and complexity in this usually hidden world.While we may all wonder about the lives of the Beduin when we drive past one of their encampments, few of us know much about this ancient culture that is officially part of Israel and yet very separate from the mainstream.Zexer has made an engrossing film about the lives of a mother and a daughter who struggle to assert their identities but still long to fit into a culture they respect.The movie, which won the Grand Jury Prize at the Sundance Film Festival this year in the World Cinema Dramatic category, is nominated for 12 Ophir Awards – in almost all the major categories – and is one of the strongest Israeli films this year.It opens with a very ordinary scene: Suliman (Hitham Omari) is giving his daughter Layla (Lamis Ammar) a driving lesson in their rundown pick-up truck. They talk about her grades at the university — he has high expectations — and they seem to have a close, affectionate relationship. When they get home, though, nothing is ordinary— at least by non-Beduin standards. Suliman and Layla are hauling furniture in the truck that must be assembled quickly because Suliman’s wedding, to his second wife, is about to start.The person in charge of the celebration, his first wife and Layla’s mother, Jalila (Ruba Blal-Asfour), is doing everything as she is supposed to. She welcomes his new bride, a woman half her age.She gets into costume as a man for the celebration, a Beduin custom.She and Layla even build the bed that her husband and her new bride will share, in a redecorated apartment that is much grander than the quarters Jalila shares with her children.While Jalila is doing everything by the book, her face shows the emotional price she is paying. At the same time, she is managing another crisis, one that concerns her daughter. Jalila finds a forbidden cell phone that belongs to her daughter and learns that Layla is in love with a young man, also a Beduin but from a different tribe, whom she met at university.While Jalila lays down the law for her daughter – Layla must give up this young man – this mother faces another problem: Her husband, busy with his new bride, no longer repairs anything in Jalila’s apartment and has stopped giving her food and money.Jalila, insisting she does not need anything, confronts her husband only about the daughter’s boyfriend. But the strong-willed Layla, breaking tradition, begs her parents to meet this young man and allow them to marry. But her rebellion leads to a series of events that have unpredictable consequences.This drama unfolds in a series of short, intense scenes, and the wonderful performances of the three main actors bring it to life.Lamis Ammar has the showiest role as the young woman who has had a taste of independence and doesn’t want to be told what to do anymore. Ammar is extremely beautiful and has a strong presence. Hitham Omari, the actor who also works as a news cameraman, became famous as the militia leader in the film Bethlehem.He turns the father, who may sound like a self-involved lout, into a complex character who is, in some ways, as much a victim of circumstances and customs as the women.Ruba Blal-Asfour gives a standout performance as a woman whose heart won’t allow her to play the role to which she has been assigned. Her sorrow and sense of loss are palpable. She has been nominated for an Ophir Award in the Best Supporting Actress category, although her screen time is about the same as Ammar’s, who has been nominated for Best Actress. Whatever the category, all three leads are remarkable in this simple but affecting drama.The cinematography turns the desert dust and the bright colors of the fabrics that decorate their compound into a starkly beautiful setting. All the elements in the movie work together to tell a story that upends stereotypes but still mines the drama in the clash of tradition versus modern Israeli culture.