A very human and funny story of how repression can come with a seductive face – the men don’t go along with the rabbi out of cruelty but because he inspires them. 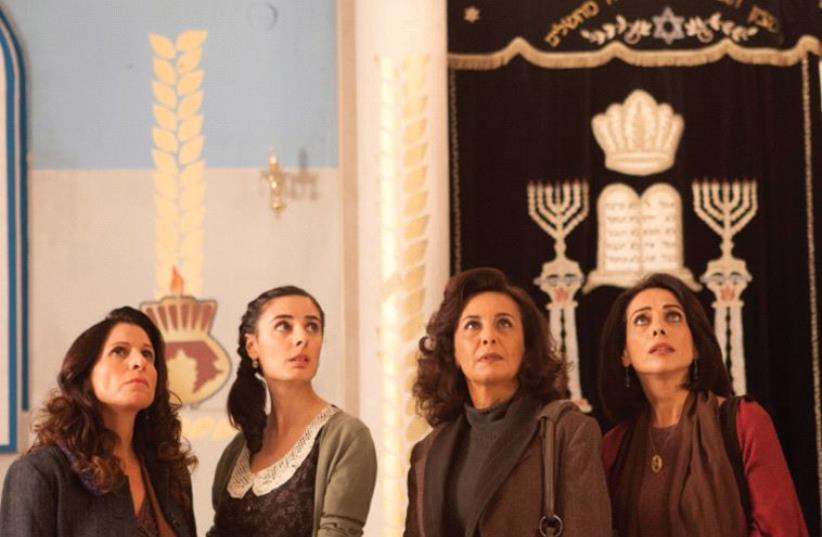 ‘Women’s Balcony’
(photo credit: PR)
Advertisement
THE WOMEN’S BALCONY
Hebrew title: Ismach Hatani
Directed by Emil Ben-Shimon With Evelin Hagoel, Avraham Aviv Alush, Igal Naor, Orna Banai, Yafit Asulin
Running time: 96 minutes
In Hebrew.
Check with theaters for subtitle information.Emil Ben-Shimon’s The Women’s Balcony proves that a movie doesn’t have to be mean spirited in order to be funny.It’s a story about the members of a small Mizrahi synagogue in Jerusalem, and how the women are – gradually – empowered.The story is a throwback to a kinder, gentler time, when communities were closer, although it isn’t set in a specific period. The clothing all seems to be contemporary, but there are no cell phones around. When there is an event to be celebrated — a bar mitzva, a holiday or a wedding — the entire group heads out to the synagogue, located in one of Jerusalem’s older neighborhoods. There are none of those garish event halls that people tend to use these days, and the women prepare the food themselves; no one goes into debt paying for huge catered meals.The story starts out at a bar mitzva celebration, and we get the flavor of the neighborhood as everyone gossips on their way into the synagogue. The women compare notes on the food they have brought as they set it out, and when a little boy plays with the coffee urn and turns it off, one of the women urges him to turn it on again, then surreptitiously does it herself. We can see that this is a congregation where religion is part of the fabric of life and where there is a certain amount of tolerance for different levels of observance. The women file into their balcony, and just before the bar mitzva boy starts to read, the balcony collapses. The synagogue is closed until further notice.This very symbolic accident sets off a chain of events that affect the lives of several families, notably that of Eti (Evelin Hagoel), the spirited grandmother of the bar mitzva boy.There is no money for renovations, and the men try to find an alternate site for their minyan. But once they are relocated to an out-of-the way building, few people show up, and they turn to passers-by for help. The young, charismatic, ultra-Orthodox rabbi, Dovid (Avraham Aviv Alush), comes to their rescue, and soon he becomes their de facto rabbi, since their own rabbi’s health is failing, especially since his wife was badly injured in the accident.The men are energized by this new young leader, but Rabbi David has a message that the women of the community find hard to swallow: The accident happened because the women weren’t dressing modestly enough, and the synagogue should be rebuilt without any place for women. The women are shocked, and most of them rebel. The movie becomes a bit like Aristophanes’s Lysistrata, an ancient comic trope that was recently mined by Spike Lee in the film Chi-Raq.There are serious issues at stake here, but the director and the screenwriter, Shlomit Nechama, take a gentle, humorous approach. The struggle of these assertive women to make sure they remain part of the congregation is moving, especially at a time when there are sex-segregated bus lines where women sit in the back, women still cannot get a divorce without their husband’s permission, and there are restrictions on how women can pray at the Western Wall.But it’s primarily a very human and funny story of how repression can come with a seductive face – the men don’t go along with the rabbi out of cruelty but because he inspires them.The ensemble acting features some of Israel’s best performers. In addition to Hagoel, there are Orna Banai (a well-known secular leftist, who gets laughs when she her character becomes more religious); Yafit Asulin (as a young woman who falls in love with the rabbi’s assistant); Igal Naor, Herzl Tobey and Assaf Ben-Shimon.These performers have a light touch and really seem like a group of friends and neighbors.At times, once the situation is all set up, the action drags a little, and I was hoping that the women would do something really outrageous. But in this movie, everyone is essentially decent, so they don’t have to resort to anything too extreme. There might have been more drama if they did, but it would have been a very different movie.