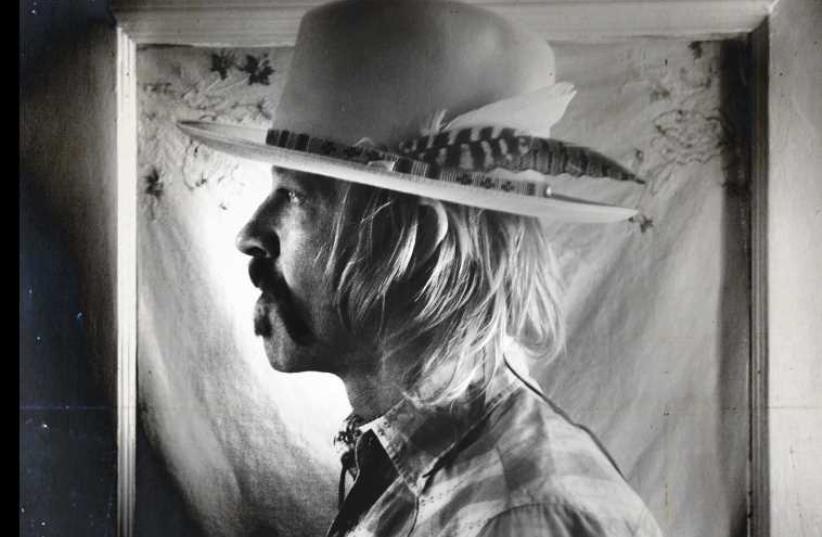 David Eugene Edwards of the American indie band Wovenhand
(photo credit: ERWIN VERSTAPPEN)
Advertisement
‘I’m no prophet, I can tell you that.”David Eugene Edwards chuckles into the phone following a sound check last week at a club in Tourcoing, France. The impeccably courteous front man and visionary light behind the fire-and-brimstone fundamentalism of Americana indie band Wovenhand is attempting to explain how he channels his deeply-held Christian beliefs into uncompromising rock & roll.“I’m never trying to speak or preach to anyone, I’m just having a conversation with myself in my songs. I’ll play different roles and speak to myself in different ways in order to answer a question, but it’s still just talking to myself,” he says.“If other people are interested in that conversation or get something out of it, that’s great.”The 46-year-old Coloradan guitarist and songwriter is the product of a religious household anchored by his grandfather, a Nazarene preacher.“That was the holiest denomination and people went because they were trying to stay holy. That’s the environment I was raised in,” says Edwards. “My father rebelled against that, he went in an opposite direction and became a biker, and died young.”Edwards located a sense of balance in his life through his discovery of music, but he never recognized it as his own form of rebellion.“I was too young to understand anything about rebelling, even though that’s what it was. I just liked it. Music was the most important thing for me from early on. First it was church music, but then I started to hear rock & roll when I went to school or to friends’ houses – stuff like AC/DC and Motorhead grabbed me right away. I liked it, and I still like it.”That combination of spirituality and hard-edged rock is where Wovenhand music finds its core, along with a good dose of old-time revival, folk and country.Formed in 2001 while his alt-country band 16 Horsepower was on hiatus, Wovenhand quickly became Edwards’ focal point.Through seven albums and relentless touring that has made them cult favorites in Europe while underappreciated in their native US, the band has thrived on songs about conflict, faith and redemption, performed with impassioned intensity filtered through Edwards’ Christian orientation. It’s much closer to punk rock than any kind of Christian rock that you might hear on Middle East TV – at least in attitude – with Edwards spewing fiery sermons that owe more to Joe Strummer and Nick Cave than Pat Boone.“There’s no contradiction between music and faith,” says Edwards. “In fact, having faith of any sort these days is a contradiction in the minds of most people.”As the SteelForBrains.com site succinctly put it, Edwards uses "the reckoning between his Christian beliefs and the world around him as a conduit to create music that is utterly earnest and unhindered by listener expectation."Another enamored writer described Edward’s out-in-front delivery like a voice “echoing over the post-rock tide like a modern day Ezekiel summoning the bones to rise up and walk.”“I wouldn’t even know how to respond if somebody said that too me,” Edwards says. “I don’t think you can become a preacher just by saying ‘I’m a preacher.’ The spirit speaks whatever it wants and wherever it wants, basically. Nobody has a corner on the market.”Currently in the midst of a four-week European tour that saw them headline the Roadburn Festival in the Netherlands earlier this month, Wovenhand arrives in Israel for a show Thursday night at the Barby Club in Tel Aviv. Joining Edwards is longtime drummer Ordy Garrison, and fellow bandmates Chuck French and Neil Keener.Edwards says he’s looking forward to returning to Israel after the band’s first visit here in 2010, but that spending a day in Jerusalem was not a spiritual revelation for him.“It was a beautiful experience, and it’s a place where people have a lot at stake and whose belief system is centered around that spot – so of course, there’s an aura around it that’s hard to avoid,” he says.“But it is just rocks and dirt, the same rocks and dirt I have back in Colorado.Of course, all of these stories from the Bible happened there, but I didn’t feel any closer to God in Jerusalem than I do in France, or sitting here backstage.”Edwards might add onstage to that list.While attending a Wovenhand concert might be a relentless and wrenching experience for some, it also contains elements of any spiritually uplifting show, from U2 to Springsteen: Edwards’ restless soul, that’s clearly searching for answers and challenging his audience. That potential for discomfort goes a long way toward explaining why Wovenhand is not a household name, but an acquired taste.“I guess that’s the punk rock attitude at play. Our music is just not commercially viable,” says Edwards. “We don’t get radio play, we don’t have videos, so we’re automatically a cult band with a dedicated group of followers.“It’s the whole do-it-yourself ethic. You do it yourself because nobody else will help you. But there are enough people that like what you’re doing that encourages you to want to keep doing it.”