Jerusalem-born actress's screen adaptation of Amos Oz's "A Tale of Love and Darkness" makes its commercial premiere in the capital. 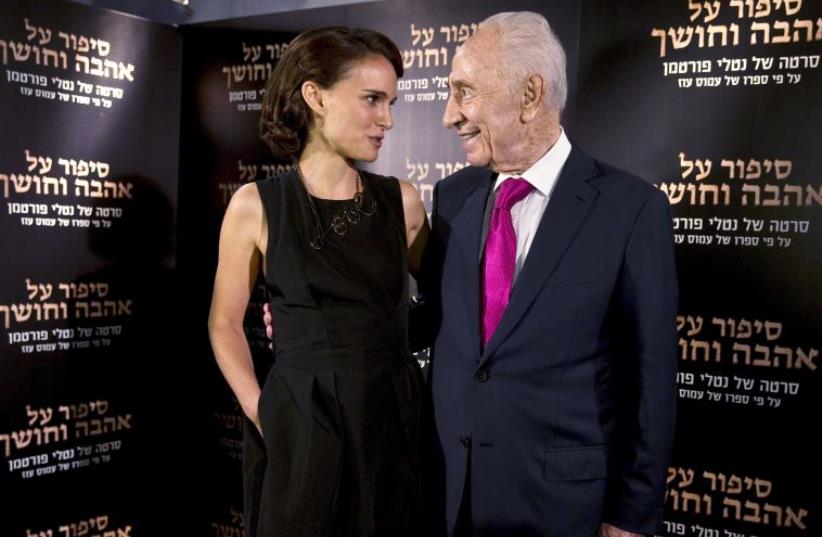 Director and actress Natalie Portman (L) speaks with former president Shimon Peres during a photocall for her film "A Tale of Love and Darkness" in Jerusalem, September 3, 2015
(photo credit: REUTERS)
Advertisement
Oscar-winning actress Natalie Portman made her directorial debut with a film sympathetic to the Holocaust-haunted refugees who founded her native Israel, but she bristles at the idea that the portrayal might be patriotic.Instead, she considers "A Tale of Love and Darkness," her screen adaptation of Israeli novelist Amos Oz's grimy, erotic and bitter-sweet work, a meditation on the shortfalls of national ideals in a land riven by the Palestinians' rival claims.
Trailer for "A Tale of Love and Darkness"
Asked during the drama's commercial premiere in Jerusalem on Thursday if the project was meant to be pro-Israeli, Portman told Reuters: "Absolutely not ... I actually find it surprising to hear it described as a patriotic film because, for me, much of it has to do with the disappointment of the dream."She said she sought to convey, as the dovish Oz argued, that Israel's early self-image as "utopia for a land of orphans who came out of the Holocaust (was) maybe blind to some of the realities on the ground - and here we are this many decades later."
Natalie Portman opens up about her debut feature film
The Hebrew-language film, in which Portman also stars as Oz's suicidal mother, focuses on Jewish hardship in a Jerusalem besieged by Arab forces in the 1948 war of Israel's founding. It also touches on the resulting dispossession of Palestinians.Though Portman waived payment, the film's slim $4.2 million budget drew on support from the rightist Israeli government, which is keen to promote the country's locations for foreign productions and push back against pro-Palestinian boycott calls.Portman took these into account in planning the shoots - which, she said, were all on Israeli land and avoided West Bank and east Jerusalem territory, where world powers would like to see a Palestinian state set up.Critical reception for "A Tale of Love and Darkness" has been mixed, suggesting limited international reach. Trade publication Variety called it a "drearily empathetic" film that would rely on Portman's star power to market. Britain's Guardian called it "a serious, well-made adaptation" of Oz's book.In May, the Hollywood Reporter quoted Portman as saying she was "very much against" Prime Minister Benjamin Netanyahu. He had been re-elected two months earlier after rallying his constituents by warning of the left-wing clout of the country's Arab voters - remarks she condemned as "horrific."On Thursday, Portman, who was born in Jerusalem and moved to the United States at age three, was more guarded on Israeli affairs."I do obviously love this country and I am also quite critical of it, as I think every engaged citizen should be," she said. "I believe in this country and I believe in the people - that it can be the best version of itself."Portman, now 34, said "A Tale of Love and Darkness" had offered her a form of completion, in requiring that she reclaim her forgotten Hebrew."It was very meaningful for me," she said. "It's weird when your first language, and maybe the language of your emotions, of your childhood, is sort of missing."