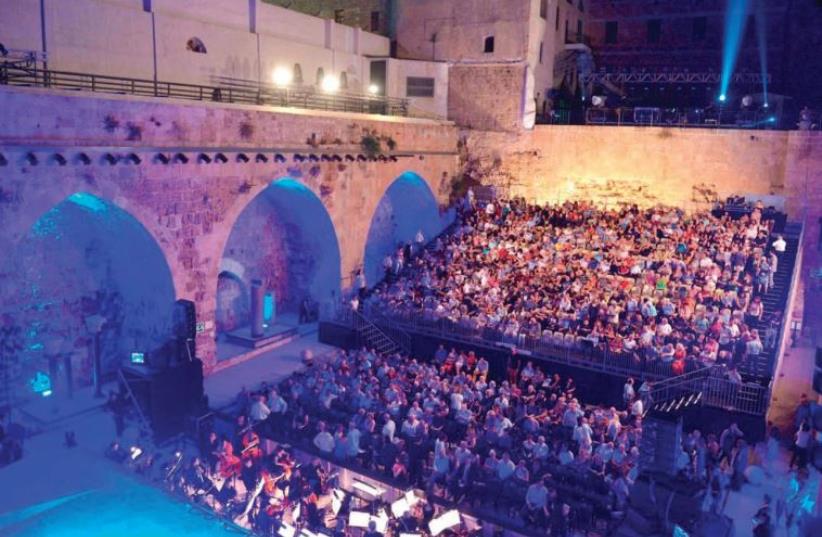 Opera night at Acre Fortress
(photo credit: YOSSI ZWECKER)
Advertisement
Whoever may have looked forward to being transported back to what Stefan Zweig called “The World of Yesterday” will have got his ticket’s worth with Johann Strauss’ operetta Die Fledermaus (The Bat), performed at the Israeli Opera by the Budapest Operetta Theatre.It portrays Viennese wellto- do and not so well-to-do society during the Habsburg period – people having nothing better to do than falling in and out of love, seducing whomever was seducible, flirting with whomever was flirtable, betraying whomever was betrayable, partying, having a good time and taking nothing seriously, at least so long as one was not on the losing side.Kero’s direction and Csorsz Khell’s sets were conservative though lively. Crowd scenes were, well, crowded. Jeno Locsei’s choreography was animated and well-polished.Most singers were also welltrained dancers, sometimes dancing better than singing.Straying away from the original, and attempts at modernization may occasionally be welcome within certain limits. Such limits were unjustifiably transgressed by turning the originally soprano role of Prince Orlovsky into a baritone, robbing him of his most remarkable characteristic, and deleting his solo aria in the process. The Hungarian accent of some singers’ German enunciation contributed unintentional authenticity, since Hungary was for the snobbish Viennese the provincial hinterland of the Austro-Hungarian empire. Humorous though this operetta is per definition, in this production the humor was frequently too forced, at the expense of the original’s subtlety.Among the singers, Anita Lukacs, in the role of Adele, was remarkable for her bright, clear soprano that climbed effortlessly to the highest notes and produced some excellently polished coloraturas. As Rosalinde, the vibrato of Monica Fischl’s soprano was too strong for comfort. In the role of Alfred, Peter Balczo made one understand why Rosalinde was infatuated with his heroic tenor. Israel Katorza, as Frosch, made the audience happy with a Hebrew monologue.The performance’s pace was set by the Budapest Operetta Orchestra, conducted by Laszlo Maklary.Avoiding mechanical accuracy, it flexibly slowed down and accelerated according to the music’s spirit.To sum up, this production did not realize the work’s potential for a sparkling, witty performance. Instead, it remained on the level of commonplace, sentimental mediocrity.