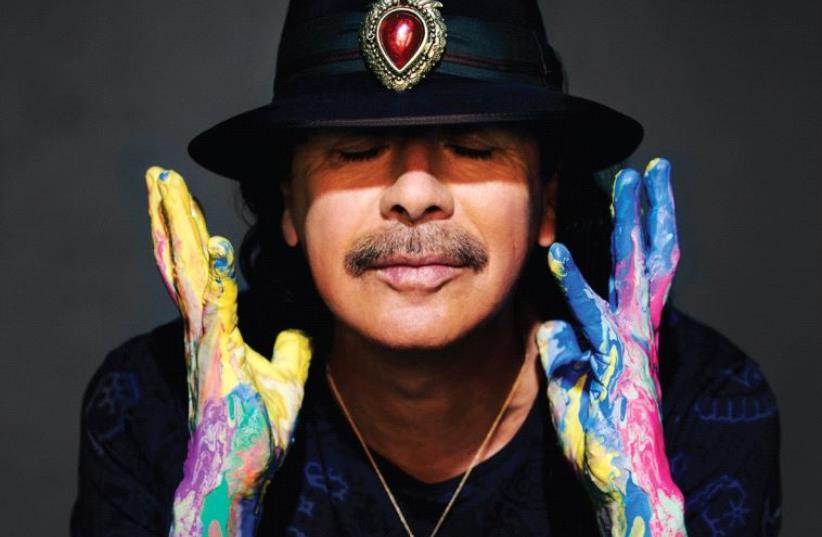 Carlos Santana
(photo credit: PR)
Advertisement
It’s a little ironic that July 30 – a few months ago touted in Hebrew tabloids as the date that Bruce Springsteen would finally arrive in Israel for a show at Hayarkon Park – is actually when The Boss’s onetime Columbia Records stable mate Carlos Santana will fill the prime time slot.Back in 1973, when Springsteen was an unheard-of scruffy rocker with Dylan aspirations, Santana was firmly established as one of America‘s premier bands, with an impressive track record of gold albums, hit singles and incendiary live performances built around the piercing guitar of leader and band namesake Carlos Santana.Fast forward 43 years, and both Springsteen and Santana are Hall of Fame rockers, crisscrossing Europe, selling out stadiums and arenas with career-spanning material. Unlike Springsteen, who may never make it to the promised land, the 69-yearold Santana is returning to Israel after a 29-year gap.The legendary legacy artist, who broke out with a Latin-based rumble at the Woodstock festival in 1969, has enjoyed a few distinct phases of his career: the wild-haired acid-rock guitar and percussion jams of the late 1960s and early ‘70s which spawned classic albums like Abraxas; the 1970s jazz fusion of transitional albums like Caravanserai and spiritually introspective collaborations with guitarist John McLaughlin; and a long period in the 1980s and ‘90s returning to Latin-fused roots music that wowed fans but didn‘t make much of a commercial dent.That all changed when his old label head at Columbia, Clive Davis, signed him to Arista Records and put together a Santana pop blockbuster in 1999. Supernatural and its slick mega-hit “Smooth,“ sung by Matchbox Twenty’s Rob Thomas, introduced Santana to a new generation of music fans and catapulted him to a level of fame he had never achieved in his first chapter. Well into his 50s, he was a ubiquitous figure on the radio and in music videos and was collaborating with young, hip names like Wyclef Jean, who name-dropped the guitarist throughout their hip hop hit “Maria Maria.”That mid-career resurgence has kept Santana in the limelight and enabled him to sell out tours around the world with a supple and versatile group of players he dubbed the Supernatural band that can play it both funky and full throttle.“Everybody knows the music at this point. Carlos will add a couple of news songs, and we’ll learn them individually,” said drummer Cindy Blackman, who in 2010 married Santana after the guitarist proposed to her on stage.“Then when we come together for a tour, we’ll play them in rehearsal. That’s the advantage of having a consistent band with steady players – you build a repertoire, and then you can add songs. You might rehearse in a concentrated manner before a big tour, but you find that you need to less and less,” she said.According to Blackman, Santana encourages the band members to branch out in shows but only because they are so in tune to his musical cues. The overriding rule – a holdover from his San Francisco Haight Ashbury days alongside Jefferson Airplane and The Grateful Dead – is to catch the groove.“There’s this concept he has, that everything has to feel good on stage, all the time!” said Blackman. “Carlos is more interested in making sure the music feels good than getting everything perfect. He tells us ‘If you guys miss a break or change in the music, I’m not mad if the music feels incredible. I’d rather have that than have everyone play their parts and the music feels stiff,’ so he’s pretty loose as a band leader and allows a certain amount of creativity from the players. He likes contributions, new things to happen in the music.”Recently, Santana looked backwards to find something new when he recorded Santana IV, an album that reunited the band’s early 1970s lineup, including members Gregg Rolie, Neal Schon, Michael Carabello and Michael Shrieve, some of whom went on to fame as founding members of the band Journey.That core unit has played a couple of shows together since the album was released in April, but Santana’s current European tour that lands in Tel Aviv this weekend showcases the Supernatural band in all shades and colors.Regardless of the accompaniment, the main attraction remains the energetic, diminutive guitarist who seems to be unable to stop smiling. As soon as Santana begins to play his bell-like tones that still sting and cut as forcefully as they did four decades ago, there’s no denying that he’s not a replacement for anyone on July 30, not even The Boss.Carlos Santana and the Supernatural band perform on July 30 at Hayarkon Park in Tel Aviv.