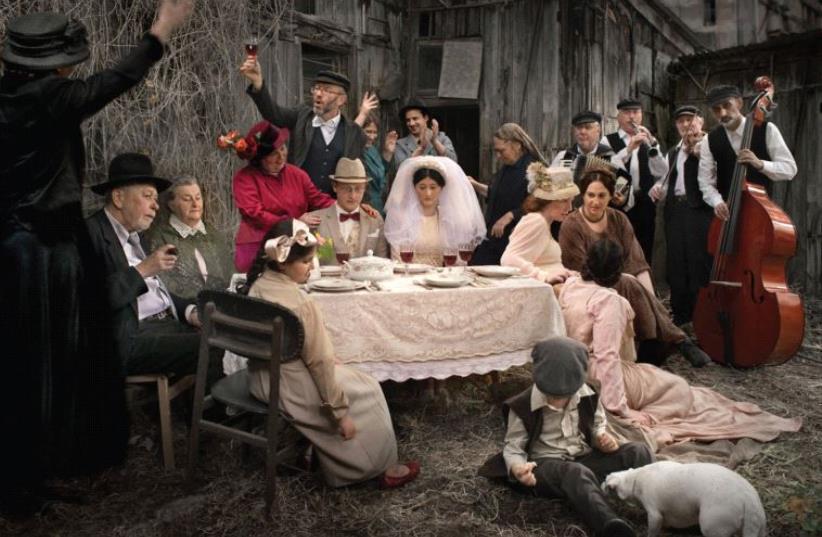 Michal Baratz Koren’s photo exhibition
(photo credit: PR)
Advertisement
They say that nostalgia ain’t what it used to be. But Michal Baratz Koren clearly does not subscribe to that negative take on temporal revival.The artist has an exhibition at Zemack Contemporary Art (ZCA) in Tel Aviv called “Mayne Tayere” (“My Dear” in Yiddish). The show, curated by Yaron Haramati, comprises eight large color prints that depict Jewish tradition-connected scenes, including a wedding, a Shabbat evening, Succot and the Rosh Hashana Tashlich custom of ceremoniously casting one’s sins into a body of water.The outsized prints tread a fine line between reality and orchestrated mise-en-scène. And there is no attempt by the artist to cover her tracks. Visitors to the gallery can examine some of the preliminary drawings and sketches Baratz Koren produced in the run-up to the shoots, and a video provides a clear handle on how she devised the human and prop compositions that eventually made it into print.Conventional wisdom also posits that you can’t go back. That may be the case, but Baratz Koren has done just about everything she can to recreate the days of yore, when the State of Israel was just a twinkle in several Zionists’ eyes.“My works are the products of longing,” she says, adding that her emotional pining purview goes beyond the strict confines of her antecedents.“The idea for the exhibition comes from my family history but also from all sorts of stories I read by writers like Isaac Bashevis Singer and from trips we made around Europe. It all got jumbled up together, and the idea came out of all that,” she explains.Baratz Koren went for as authentic an approach as she could and obtained as many original artifacts as she could lay her hands on, even down to taking some of the photographs in situ.“My grandparents came from Lithuania, Poland, Russia, and they settled in Afula and Givatayim.”When Baratz Koren created the work for “Mayne Tayere,” the latter location was still available.“Some of the photographs were taken at the house in Givatayim,” she explains. “It was abandoned then.There was the shed and the house, my great-grandmother’s shed, which has been derelict for 30 years. The plot was only sold recently.”The physical site, per se, no longer exists, as it has been taken over by developers, but Baratz Koren’s artistic endeavor means that there is at least a contemporary photographic document to be had.“I was able to keep the place alive in a way,” she says. “I also used a lot of my grandmother’s clothes for the shoot there, so I was able to give that a sort of new lease of life, too.”But for Baratz Koren, it wasn’t just a matter of making sure everyone was in the right place, donning the right threads and wearing a suitable facial expression.“Through this project I revived my connection with my grandparents and the family interaction,” she says.This was a painstaking project from beginning to end, as one might expect from a work that evokes such strong emotions and warm memories. Some of the people in the pictures are family members, some are friends and some are strangers who applied to participate in the creation process.“I chose the cast very carefully,” she says. “I chose the people I felt best fitted the ambience of my family.”It proved to be a snug fit.“There are a couple of people in one of the pictures who look very similar to my grandfather and grandmother, and they have similar personalities,” she chuckles. “That was amazing.”When viewing the exhibition, one gets a sense of a mix of realist and romantic painting.“For me, this [photographic] format is just like painting,” says Baratz Koren. “I started out with sketches, and I have always drawn and painted since I was little. I call this work ‘painting with a camera.’ For me, at the end of the day, the camera is just a means for telling the story. That’s all.”I find it fascinating to look at early photographs, before we all became used to have our picture taken and became adroit at adopting the requisite pose and facial expression.Presumably, the artist’s forebears, from the time that she recreates in “Mayne Tayere” in the early 20th century, would also have been captured with a more or less natural bearing. However, some of the people in the exhibits look more historically authentic than others.That doesn’t bother Baratz Koren at all.“This is not about trying to achieve period photographic works.I told the actors that I wanted to create situations. I told them a story [about the family], and I noted how they responded. There was usually a mess to begin with. But after a while, they would suddenly be quiet, and then I’d get exactly what I was looking for,” she recounts.The artist’s use of the thespian epithet should not be taken too literally and refers to the members of the “cast” she assembled for the job at hand.“I didn’t take professional models or actors. Instead, I took regular people who are not used to being photographed like this because I didn’t want them to be too posed,” she explains.Although the works convey familial ambiance connected to religious events and ceremonies, Baratz Koren says there is little or no observance element there.“I don’t come from a religious family. This is more about Judaism and Jewish life as a culture,” she says.Baratz Koren, who was pregnant through most of the project gestation period, says that “Mayne Tayere” was an intriguing process for her.“You can direct people, tell them what to do and how to act, but there were always surprises along the way. That was fascinating for me,” she reveals.“Mayne Tayere” is on display until October 16 at Zemack Contemporary Art, 68 Hey B’Iyar Street, Tel Aviv. For more information: http://zcagallery.com