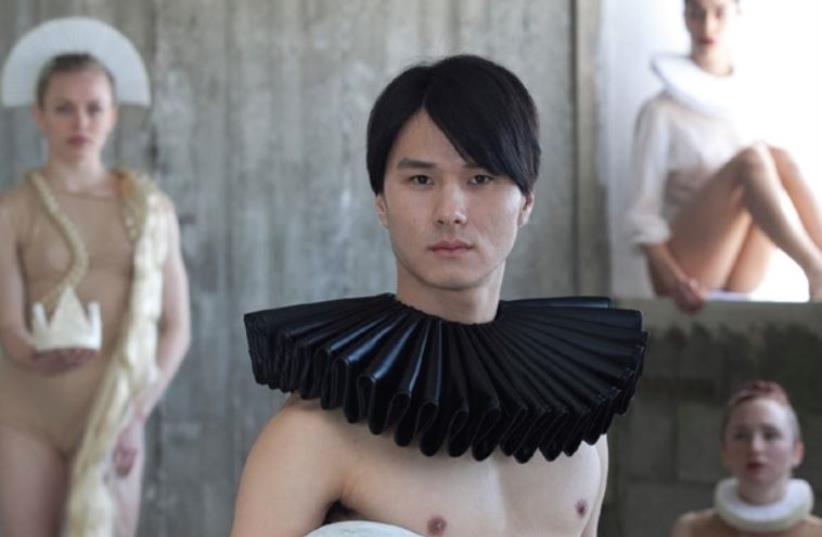 KCDC performs a corporeal biography of Tchaikovsky
(photo credit: MAAYA HOTAM)
Advertisement
Whether we know it or not, we come into contact with Tchaikovsky’s music constantly. Be it on the radio, in excerpt form as background music for commercials or at the ballet, Tchaikovsky’s creations live among us. And while it is very difficult to find anyone who has never heard his compositions, very few, even self-proclaimed fans, know more than the most basic details about his life.Growing up in France, training as a dancer, Martin Harriague was privy to many of Tchaikovsky’s great works.“I was fascinated with Tchaikovsky’s music, but I knew nothing about him. I was excited about making a dance that would be musical and not necessarily use ballet language,” explains the up-and-coming choreographer and member of the Kibbutz Contemporary Dance Company.“As I started to work on the music, it became necessary to know more about his life. It was natural that I would try to relate more to his life, which is very inspiring as well. There are a lot of young audience that don’t know about his life, and I think it’s also very inspiring to know about it, to know his journey,” he says Harriague will reveal his newest work, an evening-length piece entitled PICH, on June 18 at the Suzanne Dellal Center. The piece will be performed by six dancers from KCDC, who have sacrificed their nights and weekends to make Harriague’s vision come to life.“I am incredibly grateful to my dancers,” says Harriague.Born and raised in Biarritz, Harriague, 30, came to Israel three years ago to dance for Rami Be’er and Kibbutz Ga’aton’s KCDC.Older and more experienced than many of his peers, Harriague quickly caught Be’er attention and ear.“I had been in three other companies before arriving in KCDC. I think that Rami understood that it’s not an ordinary employer-employee relationship but that we are in a kind of true collaboration. It is a give and give situation, not give and take,” he says.The best example, Harriague explains, is Be’er’s acknowledgment and support of Harriague’s aspirations to create his own work.Last year, as part of a company produced evening, Harriague was invited to make the duet Beauty and the Beast. The work received rousing applause, going on to win several choreography competitions in Europe and placing Harriague on the map as an outstanding young voice. As part of the echo of this initial success, next year Harriague will travel to France and Holland to set works on leading companies.“Every year, we all sit down with Rami one on one to discuss the coming season. Last year, I told him that I really wanted to create a full evening and that I didn’t need any company time for it, just his support and a few lighting rehearsals. I said, ‘I will create it, you will see it; and if you like it, you can support it.’ He gave me complete carte blanche,” Harriague recounts.Harriague suited up with six of Tchaikovsky’s symphonies, his six dancers, two biographies and a desire to explore.“I wanted to use his music – not just the ballets but the symphonies, the less famous pieces, and to put contemporary dance with that music. Nowadays, there are a lot of dance pieces that don’t use music. On a societal level, we are attacked by pop music. When we use classical music, it’s very quickly considered old-fashioned. Even ballet is considered old-fashioned, and I don’t think it is. I felt it was our mission to make people sensitive again to classical music, which is slowly disappearing,” he says.Along the way, as he discovered more and more about Tchaikovsky’s music and his life, about the crippling bouts of depression he suffered, the failed marriage, the controversy surrounding his cause of death, Harriague found himself making what he calls “a dance biography.”“I read a book of letters Tchaikovsky wrote to his family and friends. In it he discusses philosophy and politics, among other things,” says Harriague.These thoughts, shared on paper via post more than 100 years ago, found their way into the studio, captured by the dancers’ bodies.“To make a dance biography in one hour with only six dancers was quite difficult,” sighs Harriague.Throughout the process, he kept an eye on the clock, editing thoughtfully and ruthlessly. The result affords audiences the opportunity to come into closer contact with two artists – one long gone and one very much alive.This year, Harriague and Be’er’s end-of-season conversation focused on how to keep Harriague in KCDC while still affording him the time needed to fulfill his invitations abroad.“Rami told me not to rush things, to take the time to cook the signature and develop it. I would not be able to do it anywhere else. I’ve never met a choreographer who gives so much freedom and support and pushes his dancers to continue looking for a stronger way of expressing ourselves in this art form. That’s why I’m staying, this freedom and the beauty of Ga’aton,” he says.

‘PICH’ will premiere at the Suzanne Dellal Center in Tel Aviv on June 18 at 9 p.m. For more information, visit www.suzannedellal.org.il.
Advertisement
Subscribe for our daily newsletter