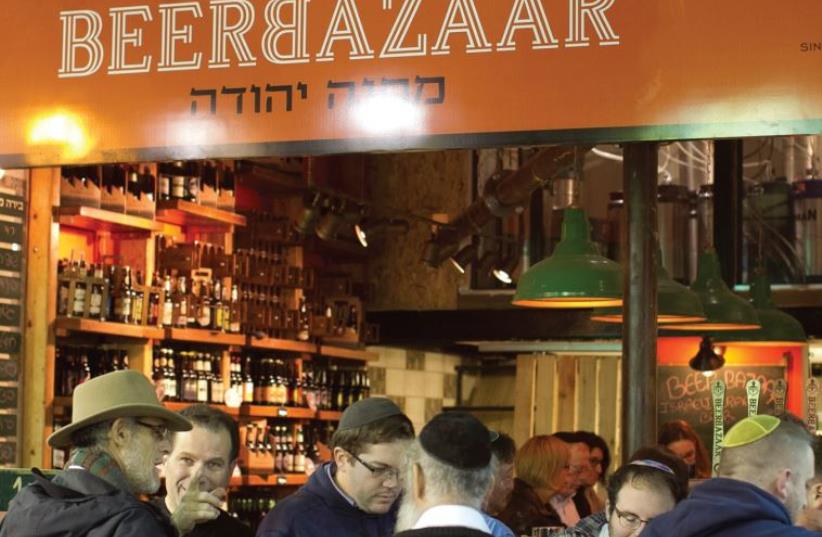 'The Beer Bazaar' in Mahaneh Yehuda Market
(photo credit: PR)
Advertisement
"I like a good beer buzz early in the morning,” sang Sheryl Crow a couple of decades ago. The Beer Bazaar, Jerusalem’s latest foray into the craft beer market, opens at 11 a.m.Perhaps that’s a little too late for Crow, but it certainly leaves the rest of us many hours in the day to sample the nearly dozen local libations on tap or bottles of Israeli favorites and lesserknown brews.Situated just off Jaffa Road inside the main covered Mahaneh Yehuda shopping route, the two-month-old venue combines a cozy bar/restaurant where everyone can easily know your name in a short time with a retail shop that offers mix and match six packs of everything, from Dancing Camel’s Olde Papa to Oasis Negev and 8.8 Jems, for a uniform NIS 79.It’s the same with the pub’s unique offerings, like a roulette wheel with 10 shot glasses of its on tap offerings for NIS 25 or its four 200 ml. glass Flights of four different beers for NIS 45.“It’s not so much an Israeli concept of every item costing the same, but we’re looking to simplify things for the customer in an effort to help them diversity their palate. If someone’s interested in trying a new beer, he shouldn’t have to make the decision based on how much it costs,” says Beer Bazaar’s overseer Avi Moskowitz, a New York-born hi-tech entrepreneur (Virtual Jerusalem and the worldfamous Kotel Cam), who moved to Israel more than 20 years ago.Co-licensing the Beer Bazaar name and concept from the three-year-old flagship venue in Tel Aviv’s Carmel Market, he assembled a young, attractive wait staff and versed them in the intricacies of explaining, pouring and enjoying hand-crafted beer. The second floor of the narrow but inviting former cheese stall is comprised of a keg room, air-conditioned and temperature-controlled, that feeds the beer down through the cooling system into a huge pipe that distributes the fizzy nectar to the waiting taps.Moskowitz explains that the offerings are updated every couple of weeks as the kegs empty out. The beers on tap on a recent chilly Jerusalem evening included two Beer Bazaar originals – Fat Cat, a light ale with a sweet start and bitter finish; and Dodash, a crisp, light-bodied reddish lager. Other selections were Shapiro’s Winter Jack that included a hint of whiskey, Bazelet’s Wheat and Malka’s Hindi.Traditionalists can order a third or half liter of any of the on tap beers for NIS 23 and NIS 29, respectively. But choosing the roulette option was like landing on the winning number every time. Even if one shot was less stellar than the previous one, it was quickly on to the next one with the anticipation of perfection. Try the delicious hot spiced cider and – whether you’re a teetoler or not – the Nitro coffee, which is a cold, brewed 100% coffee infused with nitrogen to give it a silky texture and a sweet taste.Beer may be the initial attraction of visiting Beer Bazaar, but the kosher food menu created by 32-year-old American oleh Chaim Davids using ingredients found in Mahaneh Yehuda goes way beyond salted peanuts. The hot pastrami sandwich with freshly shredded cole slaw was a transplanted taste of New York, as was the turkey breast sandwich (each NIS 34).The house specialties include the Not Your Average Chili (NIS 34), slow cooked in… surprise, stout beer; the Liver Chestnut Puree (NIS 34), which Davids deems his favorite; and the New York Classic Beef Hot Dog (NIS 24), which Moscowitz claims is the best he’s tasted in Israel.And to remind you that you’re still in the Middle East, the wild mushroom hummus and tehina (NIS 28) has to be one of the creamiest chickpea delicacies available in or out of the shuk.It only gets better with dessert. In addition to the Mahaneh Yehuda market sweets of Turkish delight and halva, the chef’s specialty is the old American favorite S’mores, but done a little differently. A crushed Lotus cookie is mixed in a bowl with 70% chocolate and topped with marshmallows and then torched until it becomes a hot gooey irresistible creation – especially after a roulette wheel of beer.Moscowitz explains that once the surrounding stalls close down at around 8 p.m., the Beer Bazaar takes over by putting out chairs and tables throughout the front of the shuk. The bar’s capacity jumps from 30 to 40 up to 300 to 400. And last week, live music was introduced to spice up the party atmosphere.“The shuk has been here for 100 years, and there’s lots of tradition. Here, we are trying something new. But we came in with a lot of sensitivity toward our neighbors,” says Moscowitz, adding that the predominantly Badatz side of the shuk is still coming to terms with the bar in its midst.Being one of the few pubs closed on Shabbat, Beer Bazaar attracts a wide and varied clientele. It’s not uncommon to see European tourists rubbing shoulders with American yeshiva students and Nahlaot hipsters as they crowd around the bar.“People can feel comfortable coming in here because it’s not a dark bar. We combine a store with a drinking experience. You can walk in without any commitment,” says Moscowitz. “The response has been phenomenal. The shuk is an amazing place to be doing anything, and the concept is built on the shuk. Despite all the craziness of the last few months in Jerusalem, people are still coming out, to the extent that the police are giving us tickets because the crowds spread so far beyond our opening. Where else in Jerusalem are restaurants having problems like that?” If it continues to combine its winning formula of the best Israeli local brews with delectable sandwich and bar food items, Beer Bazaar will keep having those problems for a long time to come.

The writer was a guest of the restaurant.Beer Bazaar
Kosher
Mahaneh Yehuda Market, Jerusalem
Sunday-Thursday, 11 a.m. to early morning.
Friday, 9:30 a.m. to an hour before Shabbat.
Saturday, an hour after Shabbat to early morning.
Advertisement
Subscribe for our daily newsletter