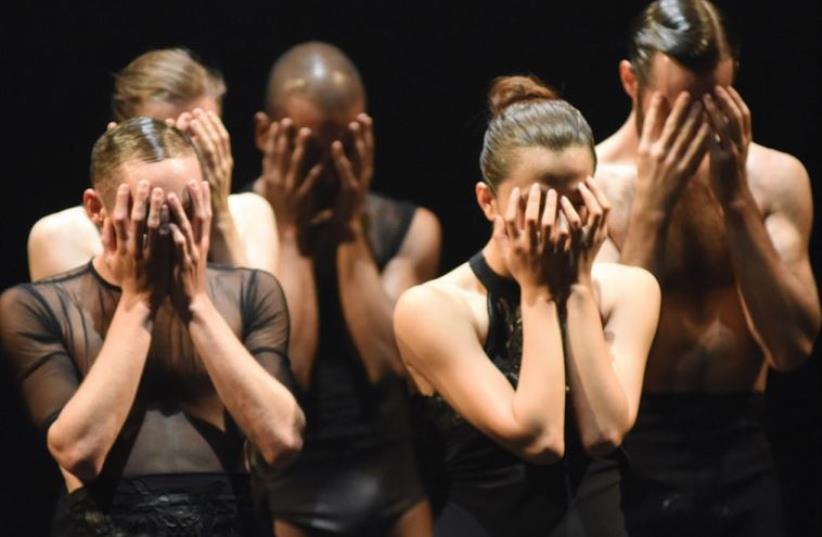 L-E-V's ‘OCD Love’
(photo credit: REGINA BROCKE)
Advertisement
When Sharon Eyal first encountered Neil Hilborn’s poem “OCD,” she felt she had stumbled upon a soul mate in the author. In the poem, which is presented in a type of slam session, Hilborn describes love through the eyes of one who suffers from obsessive compulsive disorder. He describes the incessant hand washing, the turning on and off of lights and the relentless need for perfection that at first riled his partner and ultimately alienated her. “At night she’d lie in bed and w atch me turn all the lights off. And on and off and on and off and on and off...” writes Hilborn. “Usually, when I obsess over things, I see germs sneaking into my skin. I see myself crushed by an endless succession of cars... And she was the first beautiful thing I ever got stuck on.”“This text is very strong for me because I feel as though it reflects me,” says Eyal of the poem. “I couldn’t stop reading it. For me it was like an already existing choreography or a mold that I could pour my inspiration and myself into.” Eyal and her life and work partner Gai Behar are in the midst of the premiere weekend of their company, L-E-V’s, newest piece, OCD Love . Spanning four days at Warehouse 2 in Jaffa, this event marks another significant step in the life of the budding dance company. Eyal is one of the most alluring figures in the Israeli dance community. For more than two decades she was the poster girl for the Batsheva Dance Company, first as a performer and then as a house choreographer. Together with Behar, Eyal established an entirely new aesthetic, one that draws on nightlife, darkness and sensuality. Their long-standing collaboration with musician Ori Lichtik fostered an audio continuity that deeply enhances the company’s esthetic. In 2013, the duo decided to break away from the comfortable environs of Batsheva and create their own kind of company. L-E-V represents a new model in the dance milieu, a troupe that has neither home nor country. With its six international dancers, L-E-V travels the globe, rehearsing in studios from Sweden to Tel Aviv and performing on stages far and wide. Eyal and Behar’s previous works for L-E-V include House , Killer Pig and L-E-V Night Show . The first two were created as commissions for other companies – House for Batsheva and Killer Pig for the Norwegian Carte Blanche. L-E-V Night Show invites audiences to experience dance in an unconventional setting, a nightclub. The show’s duration is between two and three hours. Viewers are free to roam through the space, choosing their vantage point. With OCD Love , Eyal and Behar continue on their dark journey through passion, distress and techno beats. Using Hilborn’s text strongly influenced Eyal and Behar’s process. Usually, Eyal begins with movement, allowing the flow of her body to set the tone for the process. Here, she began with an image or structure already set in her mind. “It is the first time that the core of the piece was shaped in my head and so, figuratively, before we even began working. I knew the way it feels and smells. Like the end of the world, without mercy. A smell of flowers but very dark. Like falling into a hole and not coming back. A lot of noise but desperation for quiet. It’s not coming from a place that I want to make something sad but something that I need to take out of myself, like a dark stone I have in my chest,” says Eyal. Dancers Gon Biran, Rebecca Hytting, Mariko Kakizaki, Keren Lurie Pardes, Doug Letheren and Leo Lerus perform OCD Love . Thierry Dreyfus designed the lighting for the piece. L-E-V will perform ‘OCD Love’ at Warehouse 2 in Jaffa on October 23 and 24 at 8:30 p.m. For more information, visit www.lev-dance.com