At times, it seemed that a substantial portion of the audience was singing along to almost every song. 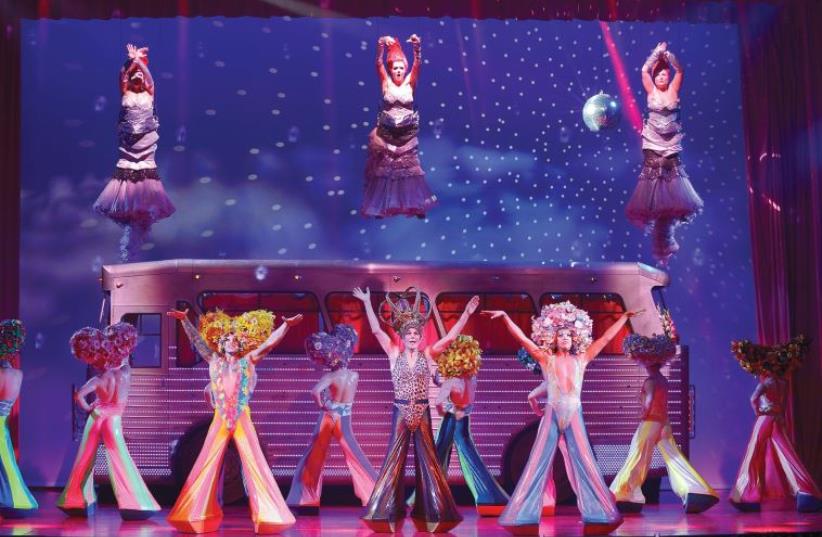 DAZZLING DIVAS: An Outback kickline in ‘Priscilla Queen of the Desert The Musical.’
(photo credit: PAUL COLTAS)
Advertisement
Bathed in pink disco ball lighting, Priscilla Queen of the Desert The Musical rolled into Tel Aviv’s Menora Mivtachim Arena on Monday night with its party atmosphere and a fanfare of glitter, feathers and sequins. From dancing cupcakes to gowns fashioned into giant paintbrushes, the show was a feast for the eyes and ears.Based on the 1994 Australian cult film Priscilla Queen of the Desert which starred Hugo Weaving, Terence Stamp and Guy Pierce, the play follows drag performer Tick, who gets a call from his ex-wife, who says he can perform his show at the small casino she owns if he will finally agree to meet his six-year-old son. So he gathers his transsexual friend Bernadette, as well as his flamboyant young colleague Adam/Felicia, and the three head out in a souped-up old bus named Priscilla to travel across the Outback to get to the casino. On the way, they encounter situations that ultimately influence them in various ways – and language that would make a sailor cringe.Former Neighbors heartthrob Jason Donovan who originated Tick on the West End reprises his role in the production and brings warmth and compassion to the part of the drag queen who desperately tries to build a relationship with his young son. Adam Bailey is wonderful as the flirty and flamboyant Felicia. But it was Simon Green who stole the scenes as the aging Bernadette, with her bitchy one-liners and snide put-downs.A special mention must go to the ensemble cast, in particular the three divas who fly in and hover above the stage while belting out the show’s hits.The music is like a mixtape of classic pop hits and disco floor killers. They include “I Will Survive,” “Hot Stuff,” “Macarthur Park,” “Go West” and “Girls Just Wanna Have Fun,” as well as a host of Kylie Minogue hits.At times, it seemed that a substantial portion of the audience was singing along to almost every song.There’s no question, though, that top billing in this show should go to the costume designers. Priscilla’s costumes are as wildly extravagant and fantastical as the concept of the story itself. Feather boas, enormous wigs, painfully high heels and false eyelashes abound.Each show features 500 costumes, 100 wigs and 150 pairs of shoes.Aside from the camp madness, the show also touches upon important social issues of homophobia and acceptance, friendship and fatherhood.By the final bows, the crowd was on their feet and dancing, having caught the party bug. If you’re a fan of the film you won’t be disappointed, as the musical marvelously recreates the original magic. So hop on board and strap yourself in for a raucous ride Down Under.