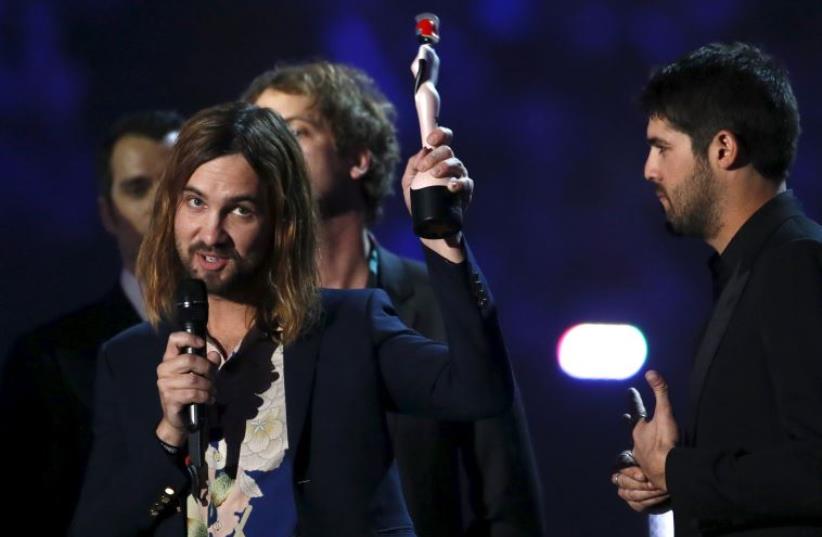 Kevin Parker of band Tame Impala speaks as they receive their Best International Group award at the BRIT Awards at the O2 arena in London, Britain, February 24, 2016
(photo credit: REUTERS)
Advertisement
"I haven’t sweat this good in a long time” joked Tame Impala lead singer Kevin Parker as he stood at the front of the stage, barefoot, guitar in hand, dirty blonde hair drenched with July humidity. It didn’t seem to bother him though, as the celebrated Australian band which has been making the European festival rounds shared its psychedelic air in its Israeli debut before an enthusiastic young crowd at Rishon Live Park.After a warm opening from Sydney-based band Jagwar Ma, Tame Impala did without the fluffy crowd talks and extensive visual effects, going straight to the heart of their music. An amalgam of ‘60s rock with ‘80s pop, they’ve proven to be on an ever-changing journey since the band’s days of bedroom recordings in Perth in the late 2000s.Opening with “Nangs,” from last year’s album, Currents, Parker’s atmospheric voice led the crowd through a dreamy, well-crafted set list. The crowd sang the words to every song, especially “Alter Ego” from their first album.Tame Impala was able to create a pensive yet shared musical experience, perhaps a product of Parker’s bold transparency. The band’s electro-pop sounds reflect how they’ve grown as a band. The night served as a refocusing on the core of what a concert should be – a pure musical experience.