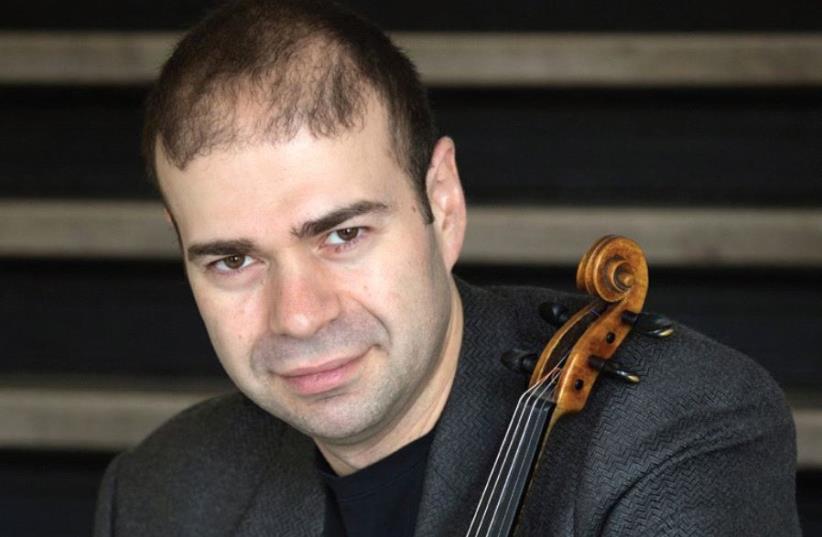 RENOWNED CLASSICAL violinist and teacher Grigory Kalinovsky
(photo credit: Courtesy)
Advertisement
Grigory Kalinovsky, a successful soloist and much sought after violin teacher is returning to Israel for a series of master classes in Jerusalem, Tel Aviv and Givatayim. He will also participate in two chamber concerts at Clairmont Hall at Tel Aviv Music Academy, playing Brahms together with his Israeli musical friends.Born into an artistic family, Kalinovsky started playing violin at age four in his native Leningrad (now Saint Petersburg) and at 15, together with his family immigrated to the US.“I had some trouble continuing my studies in the US for a while, so at age 19 I had to decide whether to quit playing or to learn anew,” he says. He eventually graduated from the Manhattan School of Music, studying with Pinchas Zukerman and Patinka Kopec.Hailed by critics as a “superior poet” and praised for his “heart and indomitable will,” Kalinovsky has performed at some of the world’s major venues; as a recitalist and avid chamber musician he has performed at numerous concert series and festivals.Despite that, teaching violin is at the center of his musical world. He serves as a professor of violin at the Indiana University Jacobs School of Music and “within the last four years has conducted more than 80 master classes worldwide,” says Kalinovsky in a phone interview from his home. “Already in my childhood, I was attracted to teaching. I was just 13 when my teacher Tatiana Liberova used to ask me to work a bit with younger students, and it was great fun trying explain to them how exactly did I manage to play some passage better then they did. Later in the US I rebuilt my technique being already 19 – meaning that this knowledge is in my conscious and not subconscious. And I feel a strong urge to pass this understanding further.”Speaking about highlights of his educational approach, Kalinovsky says that he “merges the two schools, the Russian one, which uses images to explain music and technique, and the more concrete Western school. In a nutshell, I teach how to achieve maximum expressivity with a minimum physical effort. This not only allows you to concentrate on more important aspects of performance, but also gives an opportunity to play into very old age.”He accentuates: “As for my performing career, at some moment I felt that I’d rather spend my time practicing and teaching than using all my energy on promoting myself. I do keep playing solo, as well as recitals and a lot of chamber music, which is my major love. But I play for the pleasure of it and as long I am able to produce expressive and beautiful sound, I feel happy!” Kalinovsky will conduct master classes today between 10 a.m. and 1 p.m. at Buchman-Mehta School of Music in Tel Aviv and between 3 p.m. and 7:30 p.m. at Givatayim Conservatory; May 16 between 12 p.m. and 5 p.m. at the Jerusalem Music Center; and May 23 between 10 a.m. and 5 p.m. at the Israel Conservatory of Music in Tel Aviv.Kalinovsky will also be performing with Israeli pianist Assaf Zohar in two all-Brahms chamber concerts at Clairmont Hall at Buchman-Mehta School of Music in Tel Aviv on May 18 at 7:30 p.m. and May 19 at 10:30 a.m.