President Reuven Rivlin hosted a meeting on Sunday of the warring factions in the current struggle over freedom of speech and refusal to appear in productions over the Green Line. 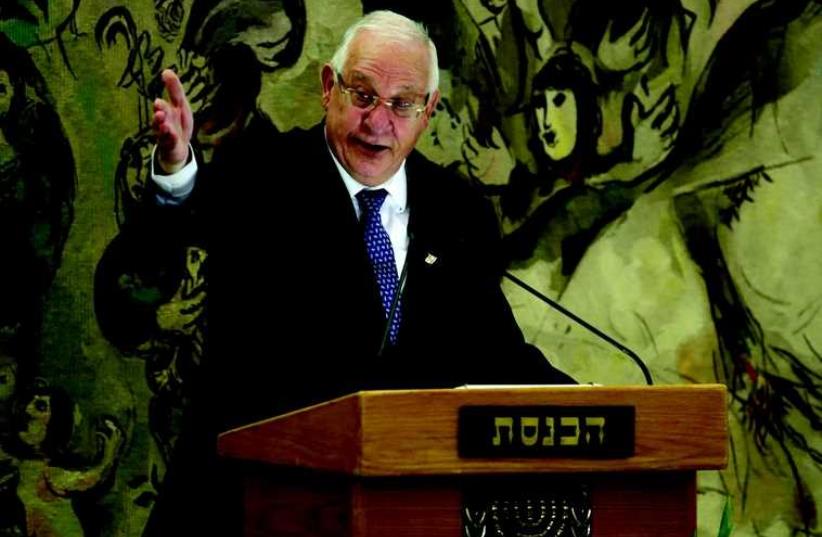 Le président Rivlin
(photo credit: DR)
Advertisement
President Reuven Rivlin hosted a meeting on Sunday of the warring factions in the current struggle over freedom of speech and refusal to appear in productions over the Green Line.Gathered at the President’s Residence in Jerusalem were Culture and Sport Minister Miri Regev and a group of Arab and Jewish artists including actors Norman Issa, Mira Awad and Oded Kotler, Habimah Theater’s artistic director Hanan Snir and Cameri Theater director Noam Semel, all of whom have been critical of Regev.Joining Regev was her ministry’s director-general Orly Froman and Dr. Haim Perluk, the chairman of the National Council for Culture and the Arts.The meeting came in the aftermath of Regev’s threat to withhold funding from the Jaffa-based Elmina theater that Issa and his wife run because the well-known actor announced that he would not appear in a production of Boomerang – a show in which he stars for the Haifa Theater – that was slated to go up in a Jewish settlement in the Jordan Valley.At a gathering on June 14 to protest the move, Kotler added fuel to the fire by saying: “Imagine your world silent, Ms. Regev, without books, music, poems. A world where there is nothing to disturb the nation from celebrating 30 [Likud] Knesset seats followed by a herd of cattle chewing their cud.”Rivlin said that he had called the meeting to calm tensions and to remind those present that Israel was in a constant state of disputes of one kind or another dating back to the differences between Hillel and Shamai [in the first century BCE]. He emphasized that it was essential to find a point of agreement from which to build on in a spirit of mutual respect.The president made it clear that he was not acting as an arbiter, but simply out of a sense of goodwill and out of the realization that people must learn to work together amicably for the sake of Israeli creativity, for the benefit of the public and for democracy.He was certain that all those to whom arts and culture is dear would learn to overcome whatever disagreements there had been in the past.Issa voiced his willingness, but Kotler remained obdurate, though not as venomous as in a more public domain the previous week.Regev repeated her contention that while freedom of expression is part of the DNA of Israeli society, the state has the right to decide on the criteria for its financial support.She was particularly interested in supporting peripheral communities, she said, including non-Jewish communities, but she also wanted to promote Jewish and Zionist heritage.At the conclusion of the meeting, Regev said that she had no doubt that this was the first but not the last of such encounters.Rivlin said that the arts had been Israel’s best ambassador, and he was optimistic that this would continue.In radio and television interviews after the meeting, Semel was asked whether he would take the Cameri Theater to the Jordan Valley or other areas of dispute, and his reply was that while any actor or actress who for reasons of conscience did not want to perform across the Green Line could be replaced, the theater had to perform everywhere, because people living across the Green Line pay taxes and serve in the army like everyone else and are therefore entitled to see state-funded theater.During the Israel Theater Prize awards ceremony on Friday in Tel Aviv in which she was there to make the presentations, Regev was met with insults and boos.