Definitely check this place out for your next special occasion. 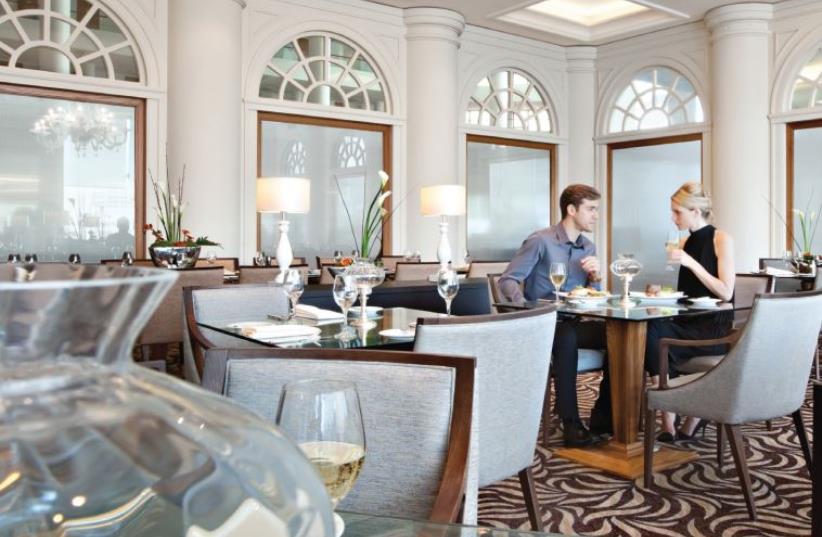 The InterContinental David Tel Aviv hotel
(photo credit: PR)
Advertisement
Love was in the air as well as in the kitchen as the InterContinental David Tel Aviv’s popular kosher restaurant Aubergine hosted a special Valentine’s Day dinner last night. The evening was devoted to trying out a special Valentine’s Day menu created by head chef Alon Hirtenstein, that, at NIS 350 a diner, was very good value. There was a glass of wine, three starters, soup, two main dishes and dessert all included in the set menu. The evening began with a complimentary glass of champagne as well as a rose for the ladies. Soon after we were seated, our waiter arrived with an appetizer of fresh bread accompanied by three excellent spreads: dill, potato cream and olive oil with balsamic. Each spread tasted wonderful, and we would have happily kept on eating them had the first courses not arrived.We enjoyed the seared red tuna appetizer as well, which was the perfect size to fill you up but not leave you feeling overly full. The tuna was lightly seared, leaving it delectably raw in the middle; and the cucumber cream, avocado and cherry tomatoes served on the side complemented the fish very well. This was followed by the foie gras. The goose liver medallions were seared to perfection, while pink and almost raw inside. The mixture of tastes and textures of the meat, sweet orange vegetables cream and berries was absolute bliss. The essence of this dish was so complex, and the flavors blended together like magic.Next up was the Jerusalem artichoke soup with pomegranate concentrate. It did not disappoint. The soup was rich, warm and comforting and had great depth and flavor.In between we enjoyed two glasses of red wine from the Yarden Winery. Last we were served the beef fillet in a Cabernet sauvignon sauce. The fillet was absolutely delicious. Medium-rare, it was perfectly cooked with the right amount of juicy tenderness on the inside and charred crispiness on the outside. The sauce added a soft, creamy richness and a ever so light sweetness to the beef. It came accompanied by sweet potato carpaaccio, red peppers, broccoli and confit beetroot cubes.After a bit of breather, we valiantly strove onto dessert which consisted of pina colada textures. It went well with coffee and ended the meal perfectly.In a nutsell, service was impeccable, ambience was romantic and upscale, and the food was simply delightful. Definitely check this place out for your next special occasion.The writer was a guest of the restaurant.