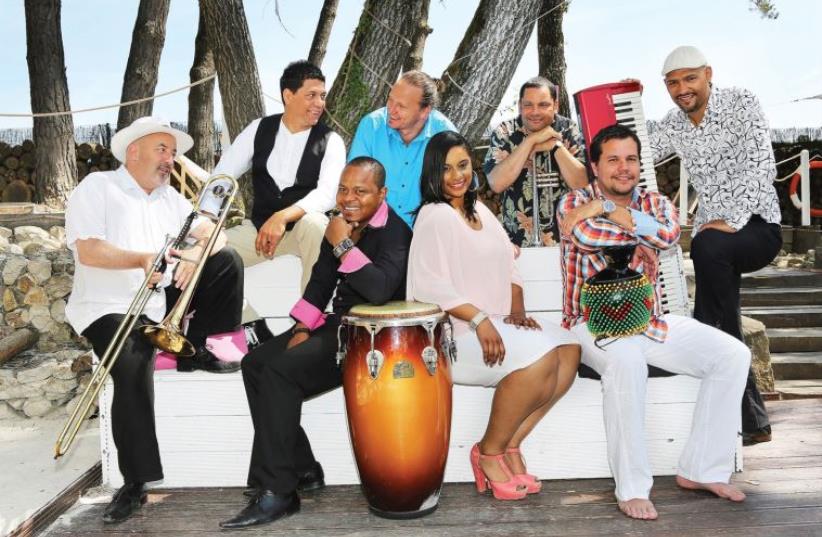 The Cabo Cuba Jazz band
(photo credit: SIMONE STARON)
Advertisement
The upcoming installment of this year’s Hot Jazz series stands every chance of fitting the eponymous scorching temperature epithet, with plenty of jazz seasoning thrown in.Next up is the Cabo Cuba Jazz troupe, which will tour the country for a week, starting tomorrow in Ganei Tikva and taking in gigs at Zappa Herzliya, Einan Hall in Modi’in and the Tel Aviv Museum of Art, closing at Abba Hushi House in Haifa on July 23 (9 p.m.).By definition, the six-piece band plays sounds and rhythms that originate in Cuba and Cape Verde, but there is plenty more in the group’s sonic mix, including Latin jazz and other improvisational departures. That might very well be down to the multinational nature of the lineup, which takes in musicians from Cape Verde, Cuba, Venezuela and Germany.The latter is represented by percussionist and band leader Nils Fischer, who brings an abundance of musical acumen, heavily seasoned with bucket loads of joie de vivre. He also went to some lengths – in a physical sense, too – to get a handle on the music which captured his imagination and drew on his heart strings from an early age.“I started playing percussion; and when you play the congas and you are serious, you really have to get into the music from Cape Verde,” Fischer declares.The German-born Fischer was clearly one determined youngster and headed straight for Cuba, where he trained with local masters and came across some likeminded artists from Cape Verde.“I played music all day, every day, for two months in Cuba. That really helped center the way for my life,” he recalls. “And there are so many different cultures [in Cuba], and many people from Cape Verde there, so naturally there were a lot of opportunities for the percussion and the congas. So I really got into the culture of the Cape Verde music.”Cape Verde is also known as Cabo Verde, hence the band’s name.Fischer also got some other freeflowing fare under his belt, with a berth in a jazz group.“That’s how I got the Cape Verde, Cuban and jazz influences in my music,” he says, noting that the music of West African archipelago and Cuban sounds share much common ground.“Cape Verde is far away from Africa, so it is really a foreign culture. But the music is very much derived from Africa, especially from Senegal. And Cuban music has, of course, influences from Africa – from Nigeria and from Angola – and there is a Spanish influence. So there is a very strong connection [between Cape Verde music and Cuban music]. It is like the same language but it is, let’s say, a different dialect. We try to bring them together. Some things are really common, and some are really different,” he explains.The confluences provide a heady musical broth of the blues-inflected sensibilities of Cape Verde, as well as the island chain’s joyful coladeira dance music and electrifying rumba beats from Cuba. The CD also stars Grammywinning jazz trumpeter Brian Lynch, alongside stellar Cape Verdean vocalist Grace Evora and Colombian vocalistpercussionist Alberto Caceido.The musical spread plot thickens. In addition to Fischer, Cabo Cuba Jazz includes instrumentalists and vocalists from Cuba and Cape Verde, with bass player Yerman Aponte hailing from Venezuela.“Yerman brings influences from Venezuela. The national music of Venezuela is joropo (a lively dance genre), but all his life Yerman has played salsa. But he is a great virtuoso, also for jazz. He can play any style,” says Fischer.Sounds like betwixt the heady rhythms of Africa and Caribbean, there is plenty in the way of off-the-cuff exploration in the Cabo Cuba Jazz output.“The Cape Verdean music is really a culture of songs. The Cuban music is about repetitive rhythms, and jazz is like interconnection, and also harmonically deeper, with the chords and the changes. So the band is not like accompanying the singer. The singer is really part of the band. Everybody has a moment to star. We all play together, and we all improvise together. We really try to get a good balance between the different elements,” he says.If you are going to take off in unscheduled directions, it can help to have accrued bandstand together and to know each other well offstage, too. Fischer founded Cabo Cuba Jazz in 2008, and the group has toured the world over the years, spending long hours on the road getting to know each other as people, not just as performing artists. The band’s debut CD, Rikeza Y Valor, came out in 2011. The next release is in the works and is due out in January.Fischer says he is looking forward to the band’s Israeli tour and says he and his cohorts will aim to get their audiences smiling and jiving.“We all contribute to the shows, and we like to get in some surprises – and to surprise ourselves as well. [Legendary jazz trumpeter] Miles Davis said you should play what you don’t know. You can also say tradition is innovation. You can take a tradition but play it your own way. You can always create something new, but you never know. It is important not to be too traditionalist, but you have to know the tradition and then to experiment and see what you can do and where it takes you. That’s exciting and a lot of fun. We like to have fun with our music, and I think people get that,” says Fischer.For tickets and more information: (03) 573-3001 and www.hotjazz.co.il.