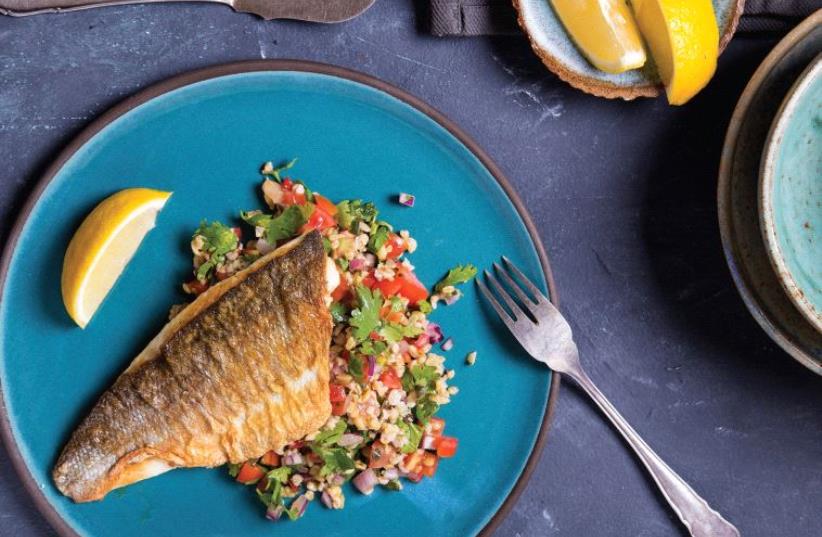 Santa Rosa restaurant
(photo credit: PR)
Advertisement
It was long Chen Shamgar’s dream to open a restaurant, and California became her inspiration. The state’s cuisine – revolving around fresh ingredients and reflecting the contributions of its immigrant ethnicities – reminded her of Israel and the Mediterranean. So when she returned home to Tel Aviv, she opened Santa Rosa, named after the culinary capital of the famed Sonoma County.The framed posters on the restaurant’s walls indeed recall California, along with the modern, casual décor with touches of elegance, such as the white tablecloths on the indoor tables; the classic rock music in the background contributes to the relaxed ambience throughout, including in the green al fresco area in the rear.Santa Rosa is only two months old, and the English menus are being introduced in stages: The wine list and the food and cocktail menus have just come out, while the translation of the dessert menu is on the way. The menus in both languages detail the ingredients of the dishes, although some have been left off the English versions.There are four specialty cocktails (NIS 42), each featuring a different liquor.Forest Delight – vodka, cranberry, berries and lemon juice, served in a martini glass – was a nice balance of sweet and tangy, while the playfully named Sunrise Tingle – tequila reposado, Cointreau, watermelon, lemon juice and jalapeño, served in a saltrimmed margarita glass – struck a similar balance of sweet and spicy.As we waited for our appetizers, we sampled the house bread, a sourdough baguette served with garlic confit, artichoke pesto and butter. It takes real willpower to keep from filling up on it.The appetizers are tapas sized, so we let ourselves be talked into trying four of them. You don’t find crab cakes (NIS 49) on too many Israeli menus, so I was eager to get to them first, while they were still warm from the skillet. They were fried just right, bursting with flaky crab meat and, thankfully, very little filler. The condiments were a mild tartar sauce and a very spicy tomato sauce.The yellow tomato gazpacho (NIS 36) was actually light green, thanks to the presence of cucumber and cilantro. The cold soup got a real flavor boost from vodka and cumin, with a hint of chili, making for a satisfying summer dish.The beef carpaccio (NIS 48) consisted of razor-thin slices of fresh beef fillet with spinach, nectarine, cilantro, chili and pistachio. The quality beef, sweet fruit and crunchy nuts combined for a terrific interplay of flavors.The seafood and white bean salad (NIS 54) – soft, plump beans and succulent shrimp, calamari and mussels, all seasoned with sage and thyme – was delicious and left us wanting more.The categories of main courses are salads, California pizzas (think goat cheese), pastas, fish & seafood and poultry & beef.Chen insisted that we order the fillet of sea bass (NIS 108), and we’re glad she did. The fish was cooked perfectly, the white interior moist, flavorful and deftly seasoned, once the saltencrusted skin was peeled back.The fish was accompanied by a very good melange of smoked wheat, tomatoes, red onion and chili salad. And since my companion does not eat gluten, Santa Rosa went the extra mile and came up with another side dish as well, a purée of potatoes and peas, which was outstanding.Of the three tempting salad courses, Chen recommended the curly lettuce and Roquefort salad (NIS 42), which also contained purple endive, figs, beets and pecans. Lightly dressed in a mild balsamic vinaigrette, the inventive salad was a veritable symphony of flavors.The wines at Santa Rosa are exclusively from Israel and California. We enjoyed a glass of the very pleasant Cannonball Cabernet Sauvignon (NIS 43).The signature dessert is the plum tart (NIS 42), made with Santa Rosa plums (no surprise here) marinated in choya (plum liqueur). The warm pie, served with a generous scoop of cool vanilla whiskey ice cream, was a dynamite combination of flavors and temperatures.With a convenient location in the residential neighborhood of Neot Afeka and plenty of free parking, there is no need to endure the hassles of downtown to have a big city restaurant experience.The writer was a guest of the restaurant.Santa Rosa Not kosher11 Kehilat Saloniki, Neot Afeka, Tel Aviv Tel: (03) 940-1011