Coming up on the small screen. 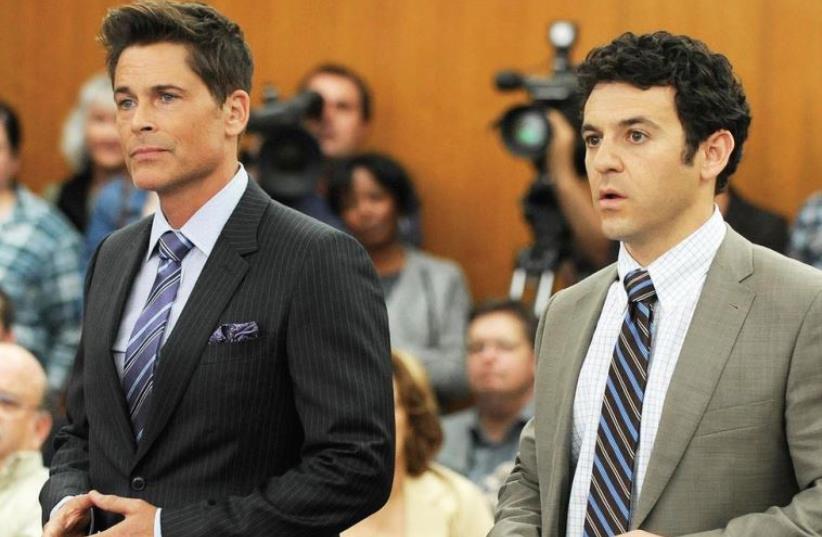 The Grinder TV show
(photo credit: PR)
Advertisement
The celebrity cameo of the week has to be Sebastian Junger, the acclaimed author of The Perfect Storm, who plays himself on this week’s episode of The Affair. The show, which alternates among the viewpoints of its four main characters – the adulterous lovers Alison (Ruth Wilson) and Noah (Dominic West) and their spouses – left its usual real-estate porn backgrounds (bourgeois Brooklyn brownstones, spectacular Montauk beachfront and an estate in Cold Spring, New York) for a self-actualizing retreat somewhere in the woods where Alison has gone to get her head together while Noah works out his divorce. When he goes to find her there, she can’t stop talking about her new friend, Sebastian, who is helping her work out her past traumas. When Noah sees that the friend is Junger, he turns into an unabashed groupie, gushing over Junger’s work. Then, at Junger’s urging, the skeptical Noah submits to a session of Reiki healing, which leaves him angrier than before.One of the pleasures of The Affair is that it is set in the literary New York world, since Noah is a novelist, and his father-in-law is a bestselling author of trashy novels. While it doesn’t delve deeply into the literati, it at least gets some of the details of the New York publishing scene right. Junger’s appearance isn’t the first literary reference on the show. At one point, Noah’s spouse Helen (Maura Tierney) says that the mediator she wants to use for the divorce agreement is “very highly recommended. He did the Jonathan Safran Foer/Nicole Krauss divorce, and now they live in adjacent brownstones.”The Affair airs on HOT Plus on Wednesdays at 10 p.m. and is available on HOT VOD.Michael Douglas, who visited Israel earlier this year to accept the Genesis Prize, is far more interesting than most A-list stars because of his willingness to play unconventional, quirky, sometimes unlikable characters. A case in point was his turn as the flamboyant singer Liberace in Steven Soderbergh’s film Behind the Candelabra, which will be aired on HOT Gold on November 14 at 10 p.m.Douglas won an Emmy and a Golden Globe for his performance in the movie, which is based on a book by Liberace’s much younger lover, Scott Thorson, who is played by Matt Damon in the film.Douglas has a firmly established reputation as a ladies’ man, and perhaps that made it easier for him to play such a stereotypically gay character – and to play him so well.The movie, which won more than 40 awards from around the world, is pure fun from beginning to end.Now that the Danny Boyle- Aaron Sorkin Steve Jobs biopic is opening, you might want to check out the first biopic on this hi-tech entrepreneur, Jobs, starring Ashton Kutcher, which is airing on HOT Gold on November 27 at 10 p.m.Jobs isn’t a great movie, but it’s not as bad as the reviews it got when it was first released suggested. But the best movie about Jobs – until now – was the 1999 television movie The Pirates of Silicon Valley, which starred Noah Wyle as Jobs and Anthony Michael Hall as Bill Gates. It would probably be available at your local DVD store if you still had one, but you can find it on Amazon. It’s particularly good about how Jobs and Gates were able to identify and buy up great technology for a song, before its inventors realized how valuable it was.YES Comedy is heavily promoting its newest sitcom, The Grinder. If you’re in the mood for an old-style television comedy, you’ll enjoy it.The set-up is that Rob Lowe plays an actor who was famous for playing a lawyer on a TV drama.After the show goes off the air, he decides to join his brainy but uncharismatic brother (Fred Savage) in his law practice and thinks he knows what he’s doing because of his television experience. It’s good to see Lowe (The West Wing, Parks and Recreation) and Savage (The Wonder Years) playing off each other, although it’s not clear how long the writers can keep this series fresh. It airs on YES Comedy on Saturdays at 9:50 p.m. and on YES VOD.