Screensaver: In one door, out the other

‘Veep’ is back, ‘Big Little Lies’ is gone 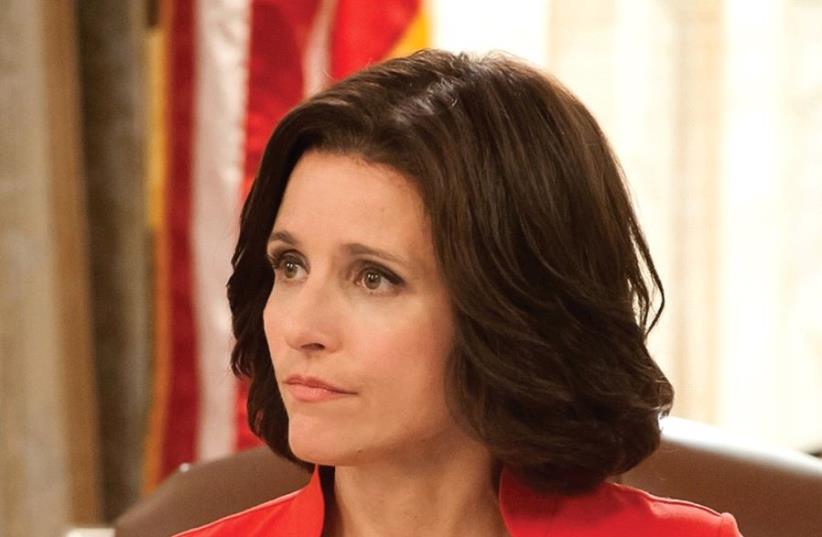 Veep
(photo credit: PR)
Advertisement
One of the many things that’s great about Veep, the TV series that stars Julia Louis- Dreyfus as the self-interested ex-VP and now ex-president, Selina Meyer, is that you can miss episodes and still understand and enjoy what’s going on. Meyer will always be madly ambitious, clueless about anything that requires thoughtfulness, and profane. Her aides will be bizarre workaholics, and Sue, her secretary, will always be scarily competent.So whether or not you remember all the details of the Season 5 finale – in which Meyer loses the presidency after the election ends in a tie, and Congress gets to choose the winner – it doesn’t really matter. You can just sit back and enjoy Season 6, which airs on HOT HBO on April 17 at 10:30 p.m. (just after the season finale of Girls) and on Mondays at 10 p.m. after that, and on HOT VOD, and on YES VOD starting April 17 and on YES Oh on Wednesdays at 10:45 p.m. starting on April 19.The new season opens a year after that humiliating defeat, and Meyer is trying to get back into the public eye. While making an appearance on CBS This Morning, Meyer says, “The loss hurt, but I did take this opportunity to reacquaint myself with an old friend of mine by the name of Selina Meyer.” David Mandel, one of the show’s creators, has said that it’s funniest when Meyer isn’t getting what she wants, and she is certainly not getting what she wants when she’s out of the limelight. Based on the justreleased trailer, she is trying to do everything she can to get back in the game, including painting over graffiti-splattered walls with children and visiting a Third World refugee camp, where the ever-present Gary whispers to her that they are walking through a minefield, “Just like Princess Di.” Her response? Fans of the show don’t need to guess. “You go first,” she tells him.The finale of Big Little Lies, the story of a murder at a school in a super-rich community in Monterey, California, has been generating a great deal of buzz. Although the series is well done, with fine performances by Reese Witherspoon, Nicole Kidman, Shailene Woodley and Laura Dern as mothers of elementary-school kids, I never got hooked on it. It was fantastic as real-estate porn — nothing says money like gorgeous views of the northern California coastline — but the characters had the Desperate Housewives disease: They just didn’t seem real. Nothing in it seemed real. When the entitled characters, such as Madeline (Witherspoon), complain about their lot in life, I guess we’re meant to find it funny, but I just found it annoying. I guess it was supposed to show that even the fabulously wealthy, liberal and trendy are as petty and miserable as the rest of us. The Audrey Hepburn/Elvis themed school fund-raiser in the finale, where the parents dressed up in elaborate costumes, was one of the few genuinely fun details in the series.The storyline that ends up culminating in the murder in the finale — spoiler alert here — is how Perry (Alexander Skarsgard, who played Eric on True Blood) is violent with his wife, Celeste (Kidman), who pretends, up to a point, that the abuse is all part of some kind of passionate role play. Eventually, when it turns out he is guilty of a violent assault on another female character, a group of women at the fund-raiser essentially beat him to death. While I’m all for bad guys getting theirs, Perry was such a shallow, one-note villain, it was hard to stay interested, even though Skarsgard did a wonderful job with what he had to work with.Even considering the star power of the cast — both Witherspoon and Kidman are Best Actress Oscar winners — I was surprised at the critical acclaim the series got. Many people seemed to think it was about women’s empowerment or something along those lines. There is even talk that there may be a second season, but I won’t be tuning in.Jane Austen Book Club airs on April 15 on HOT at 4:35 p.m.