Since its world premier in April 1996 in Montreal, Quidam has had an impressive run, performing on five continents and captivating millions of viewers. 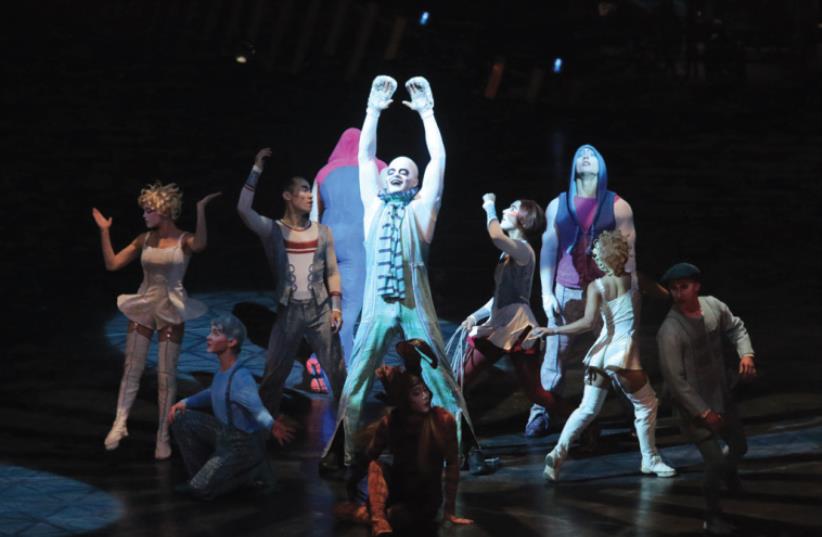 Cirque Du Soleil’s ‘Quidam’ at the Menora Mivtachim Arena in Tel Aviv
(photo credit: ORIT PNINI)
Advertisement
On Thursday night I had the privilege of attending the opening night of Cirque du Soleil’s Quidam at Tel Aviv’s Menora Mivtachim Arena. To say it was phenomenal is sort of an understatement.Since its world premier in April 1996 in Montreal, Quidam has had an impressive run, performing on five continents and captivating millions of viewers. Perhaps the darkest of all the Cirque du Soleil’s shows, Quidam takes its cue from the surrealist dreamscapes of Salvador Dali and Lewis Carroll. It follows a lonely little girl named Zoé, ignored by her parents, who looks for a way to connect with others. She finds a door to a new world of possibilities and playmates when she acquires the magic hat – a blue bowler – from the mysterious, headless Quidam (Latin for “anonymous passerby”), who wanders through holding an umbrella.After a few moments of initial story-building, the show quickly ramps up with incredible act after incredible act. Everything from juggling to amazing trapeze acts to more unusual acts, like German Wheel, Skipping Ropes and Spanish Webs, is on display, in a rapid-fire tour de force of amazing physical prowess and coordination.It’s all set to an exotic world music score by Benoit Jutras that adds to the sense of mystery, with otherworldly voices and strains of Arabic, French chanson, rock, jazz and ambient music.It is the most dangerous acts that dazzle the most. The ceiling in the Menora Mivtachim Arena is very high and the performers dangle from neck-arching heights.Julie Cameron’s aerial contortions in red silk are a painful joy to watch. Eliciting gasps from the audience, Cameron entwines her body with the material as she dramatically falls through the sky, before pulling herself back up.In another segment, a pair of actors (Yves Decoste and Valentyna Sidenko) painted as statues moved with incredible slowness through a routine that had the woman upside-down, her shoulders resting on the man’s shoulders in a feat of balance that didn’t seem like it should be possible.And as with all circuses, there are clowns –strange, surreal and occasionally disturbing clowns, but funny nonetheless.A tip of the hat goes to four audience members who were plucked from their seats to take starring roles in a clown act, where they create a scene from a silent film. Yes, Quidam has plenty of audience interaction. If that’s not your thing, be warned.And if you think you’ve seen it all, the amazing finale performance, entitled Banquine, involves 13 artists, people standing on top of people standing on top of people, a lot of jumping, and a whole lot of tossing a small girl.When the entire cast returned to the stage to take their bows they were met by a standing ovation.I left Quidam inspired – and also with the conviction that I need to renew my gym membership.The combination of excellent stage presence and skill, along with live music, makes for a memorable performance.