Choirs and soloists join the roster of the Vocal Fantasy Festival. 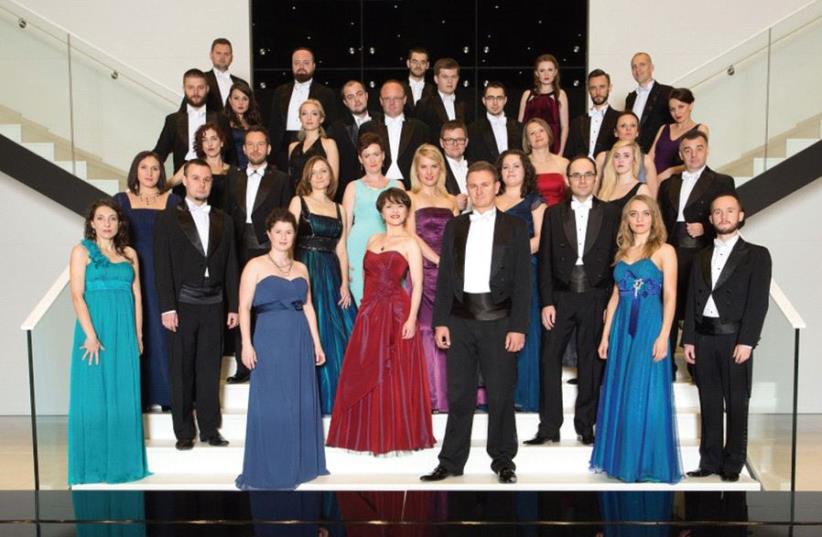 National Forum of Music (NFM) Choir from Wroclaw
(photo credit: LUKASZ RAJCHER)
Advertisement
The Vocal Fantasy Festival, a new festival hosted by the Jerusalem Baroque Orchestra, conducted by David Shemer, will take place from July 12 to 15 in Jerusalem, Tel Aviv and Haifa.The festival is dedicated to the memory of Shimon Bigelman, former board member of the festival who founded and organized the Choral Fantasy Festival in 2012-2013.The major event at the festival is Handel’s monumental oratorio Messiah, performed by the National Forum of Music (NFM) Choir from Wroclaw, Poland. Other events include the Israeli Vocal Ensemble in an evening of motets; Faure’s Requiem performed by the Jerusalem Soloists and organist Roman Krasnovsky; a lieder concert; and The Jerusalem Street Orchestra.Among the many leading Israeli soloists are Assaf Levitin, Adaya Peled, Revital Raviv, Hadar Faran, Yoav Weiss, Zlata Hershberg, Hagar Sharvit, Oded Reich, as well as popular composer Shem-Tov Levi with internationally acclaimed soprano Claire Meghnagi.The NFM Choir is one of the leading choirs today. It has won several awards and frequently records with British conductor Paul McCreesh. The choir performs widely in international festivals and gets rave reviews. For the performance of Handel’s Messiah, the NFM Choir will be joined by local soloists Hadas Faran, Zlata Hershberg, Eitan Drori and Assaf Levitin. The choir will also give an a cappella concert, presenting the great choral tradition of Poland.“This is a choir that consists of soloists,” says Agnieszka FrankówŻelazny, the artistic director of the NFM Choir in a phone interview from her home. “They are all vocal faculty graduates who are trained as soloists, so when they have to sing a solo, they do. But at the same time, they are very adept at singing in ensembles and choirs.”What are the requirements of soloists who join a choir? “Top vocal qualities and skills are a must, but they have to be flexible because compromise is needed,” she says. “They have to keep their individual musicality and color and, at the same time, pursue the common goal. They should not use too much vibrato and not do diminuendo or crescendo whenever they feel like it but only when the conductor wants them to. The NFM Choir members are mature musicians and have a lot to say themselves.”What attracts soloists to sing in a choir? “I think it’s a completely different experience. I know it because I am a soloist myself; I graduated as a choir conductor and singer. I think that is why I understand them so well,” she says. “I think singing in a choir gives one a certain sense of creating harmony. It’s not about one line – you are surrounded by sounds, and you are part of a larger organism that works so well.”On the whole, the repertoire of the NFM Choir is very wide.“We started as a philharmonic choir, so basically we have to sing everything that is vocal/instrumental – oratorios, a lot of Baroque music, Haydn, Mozart. We sing a lot of a capella pieces, including modern music with the use of electronics – very modern ways of composing.But we try not to sing pop music and early Renaissance music,” she says.The program of the festival concert, which was made possible by the support of the Polish Cultural Institute, consists of two parts.The artistic director says, “The first part features pieces from our latest and much-awarded De Profundis album, which includes sacred Polish music by contemporary composers, including a piece by Krzysztof Penderecki. For the second part of the concert, I chose Polish folk songs inspired by old texts or old melodies.We will also perform a few dances, so I hope that during the concert the audience will feel that they are in Poland.”Franków-Żelazny has been directing the National Forum of Music Choir since its inception in 2006, but her path to the position was not straight. Born in a small Polish town, she studied piano for seven years and then, for another seven, played the flute. When the family moved to the large city of Wroclaw when she was 18, her parents said she should learn a profession. She opted for biology but kept playing the flute. Upon graduation, she taught biology at school but immediately organized a choir. It was only natural for her to study singing and then conducting.“Conducting was my third faculty, but now it is my job!” she laughs.For more details: en.jbo.co.il/ vocal_fantasy_festival. For reservations: Cartis.jbo.co.il; (02) 671-5888.