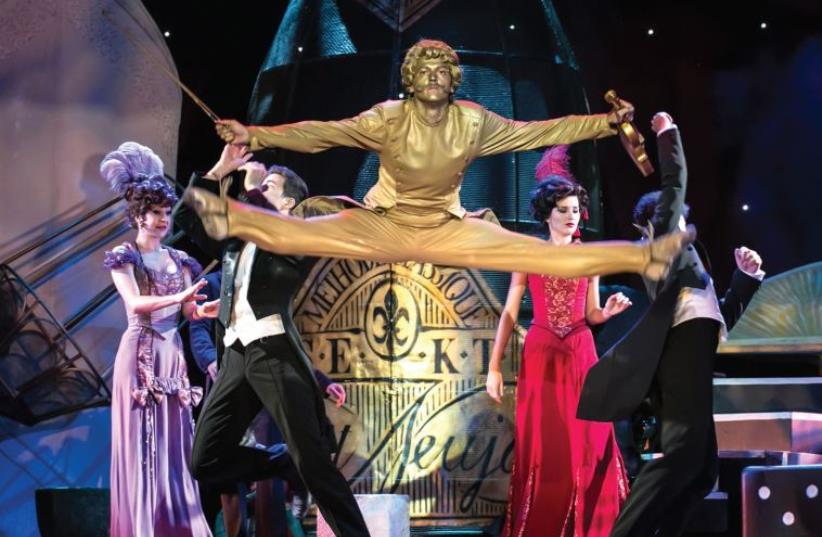 The Budapest Operetta and Musical Theatre performs ‘Die Fledermaus’
(photo credit: PR)
Advertisement
If you’re looking for pure entertainment, something to make your heart sing and bring a smile to your face, then get yourself over to the Opera House in Tel Aviv next week. Between February 11 and 20 the Budapest Operetta and Musical Theater will put on 10 performances of Johann Strauss’s ever-popular work Die Fledermaus (The Bat).I caught a performance of the work in Budapest a month or so ago, and I was treated to a scintillating high-energy proffering, awash with thrilling numbers, relentless gaiety and a kaleidoscope of colors. The choreography was also clearly devised to keep the members of the audience on the edge of their seats as the dancers twirled, whirled and frolicked across the stage with gay abandon.Die Fledermaus has been performed thousands of times to packed houses all over the world since it premiered at the Theater an der Wien in Vienna in 1874. The current production has been tweaked here and there by Hungarian theater director Miklos Gabor Kerenyi, but anyone familiar with the work will have no trouble recognizing the plot and its intriguing evolution.There are plenty of intriguing departures in the meandering storyline, replete with passion and betrayal and, naturally, some wildly comic routines. One of the main comedic roles features a permanently inebriated crowdpleasing character named Frosch, and the Hungarian company’s rendition features Israeli actor and comedian Israel Katorza in the role.“We perform Die Fledermaus all over the world,” notes Kerenyi, “so we try to include some local interest in each production.”Kerenyi says he was impressed with Katorza when they met in Budapest a few months ago.“He came over here and we had a trial run. I asked him to improvise, and he just started doing some fantastic stuff on the stage. He was amazing,” he marvels.Following on its hugely successful presentations of last year’s Bayadere and the 2014 production of The Csardas Princess, the Budapest company will come here with a 150-member cast, including its own house orchestra.Strauss had a knack for homing in on some popular aspect of life or some current affairs issue and spinning out an entertaining thematic yarn. But the universally recognized Viennese King of the Waltz had a serious side to him, too. Betwixt all the romantic goingson, strife and comedy of errors in Die Fledermaus, Strauss also wanted to have his say on some of hypocrisy and darker goings-on in the world of the well-heeled in Vienna. The operetta was written in the late 19th century, and Austria was not as all-powerful as it had been. Rumblings of discontent were beginning to ripple across Austrian society, and Strauss more than touched on the questionable mores of the well-to-do.The character of Alfred, the womanizing voice teacher, is a case in point. Alfred does his best to seduce Rosalinde, the bourgeois housewife of Gabriel von Eisenstein, who has been sentenced to a few days behind bars. Alfred and Rosalinde are old flames, and he urges his former lover to throw caution to the wind and enjoy the transient pleasures of the here and now. In another twist, when Frank the governor of the prison comes to Rosalinde’s house, to accompany her errant husband to jail, Alfred pretends to be von Eisenstein so as not to compromise Rosalinde’s social standing.The dancing, drinking and merrymaking portrayed in operettas offered contemporary audiences with a romanticized escape from the grimmer social, political and economic realities of the time in Vienna. A closer look at the plot of Die Fledermaus indicates that the characters in the operetta, like the patrons of the shows in Vienna in the late 19th century, are really looking to get away from the troubling reality outside the theater and are dancing and drinking to forget.Be that as it may and possibly for that very reason, Die Fledermaus is the epitome of madcap, gloriously nonchalant, caution-to-the-wind fun and games. Kerenyi also threw his directorial penny’s worth into the production mix and adapted the original storyline and score, adding several numbers and dances, refashioning some of the dialogue and adding spices and seasoning where he saw fit.The show opener features the character of Sigmund Freud which, says Kerenyi, ”is designed to reflect the fact that Die Fledermaus talks about the innermost thoughts and feelings of people.”The mood pendulum swings that run through the operetta also chart the emotional ebb and flow of the characters.“Their feelings burst out from time to time, and that is noted in the music,” adds the director.In addition to the sumptuous score and the dazzling costumes designed by Tunde Kemenesi, set designer Csorsz Khell has come up with some eye-opening backdrops.While the women twirl and whirl in their flowing frocks at Prince Orlofsky’s grand ball, and some of the leading characters continue to spin their webs of lies, the imposing props often offer an intriguing esthetic counterpoint.Some of the items appear downright surreal, such as a mammoth bottle and similarly proportioned cutlery dotted around the stage.“We like to give people something to think about,” explains Kerenyi.Tailoring, adapting and tinkering notwithstanding, the Germanlanguage production – with English and Hebrew surtitles – is a spectacle for the eyes and a joy for the ears.

‘Die Fledermaus’ will be performed at the Opera House in Tel Aviv from February 11 to 20. For tickets and more information: (03) 692-7777; www.israel-opera.co.il
Advertisement
Subscribe for our daily newsletter