Nithan Thai vaults into the elite of local Asian restaurants. 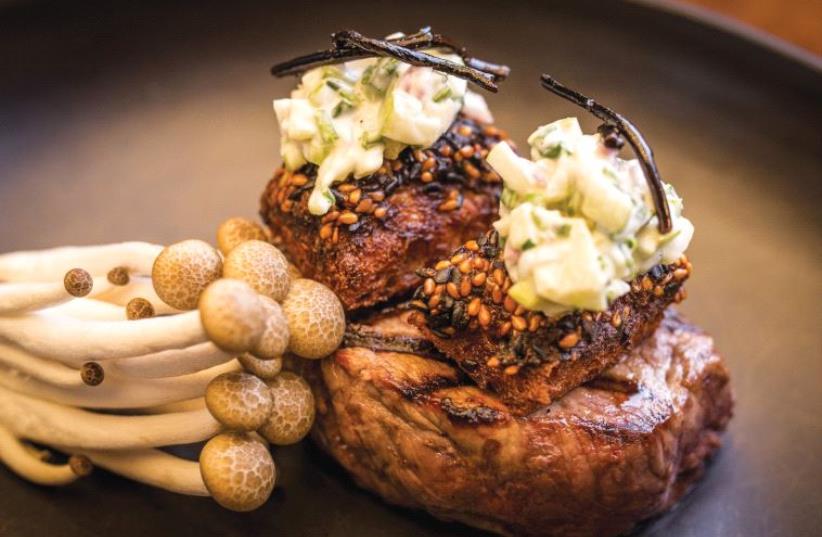 Nithan Thai
(photo credit: PR)
Advertisement
Nithan Thai opened to great fanfare about a year ago, introducing exclusive royal Thai cuisine. The concept quickly became too over the top for Israeli tastes, and the restaurant astutely changed course, recruiting celebrated international chef Shahaf Shabtay from New York to oversee the transition to an establishment serving Southeast Asian cuisine using Thai ingredients.The “new” Nithan Thai features a stunning modern decor that has retained traditional Asian motifs.The service is impressive, with attentive waiters constantly changing plates, refilling glasses and proffering wet naps from pretorn wrappers.There are eight specialty cocktails (NIS 52), of which our waiter recommended the smokey plum: whiskey, Japanese plum liquor, sake and bitters, served in a martini glass and garnished with orange peel. Smoky and bitter were indeed the dominant themes of this bracing aperitif.A very different sort of drink is the Chiang Mai mojito: rum, kaffir lime leaves, lemongrass, coconut and mint, poured over crushed ice and garnished with a large sprig of mint dusted with powdered sugar – a beautiful presentation that was a harbinger of things to come. Too many places in Israel are quick to call any rum cocktail a mojito, but this one was the real thing, albeit with an Asian accent. It was also the best mojito I have had in months.The restaurant is happy to put together a tasting menu, collated from the bilingual menu’s five sections, based on diners’ preferences. It makes a meal that much more relaxing to leave the decisions to the professionals in the kitchen.They started us off with the intriguingly named Red Farm (NIS 72): rolls of fresh sea bass and peanuts seasoned with a spicy soy sauce and wrapped in rice paper.The result was a very pleasing jumble of flavors in the mouth, but it was the pear yakitori dip sweetened with kiwi that put this dish over the top.Next was the sashi sashimi (NIS 74): sliced palamida with tiny slivers of spring scallion in a marvelous miso yuzu mandarin sauce. The extremely fresh fish practically dissolved on the tongue, while a topping of chopped toasted hazelnuts added some welcome crunch.The thai roll (NIS 88), meanwhile, was tuna, salmon and king forest mushroom wrapped in seaweed, then fried gently tempura-style.Layered on a mellow sesame sauce with an underlying hint of wasabi, this sushi was as good as can be found in any Japanese restaurant.Another successful fusion of Japanese tempura with Southeast Asian cuisine was the golden goong (NIS 82): giant crystal shrimp tempura and al dente baby asparagus in an amazing yogurtdashi sauce. It is hard for me to recall having a better-tasting shrimp dish in Israel.Our main courses began with the sea curry (NIS 106): steamed sea bass, shiitake mushrooms and tomato in a Thai yam sauce with a touch of chili. This was as close as it gets to the perfect curry: We simply could not get enough of the sauce.Another magnificent sauce complemented our second main course, the Thai beef (NIS 122): filet mignon in a morel mushroom and artichoke sauce. The tender beef melted in the mouth, while the sauce was brilliant with the accompanying zenzi toast.As befits an upscale restaurant, there is an extensive wine list with both domestic and imported wines, including 12 available by the glass.We thoroughly enjoyed the Avidan Cabernet Sauvignon (NIS 42) and a Pinot Grigio from Italy (NIS 46).The dessert menu at Nithan Thai (so far only in Hebrew) is certainly unique, as it is printed on a small box containing Asian spices used in sweets. Desserts are prepared in a satellite operation run by the restaurant called The Back Door, which specializes in baked goods and other take-away items.Once again, we relied on our waiter’s recommendations and had the macha balls and the pineapple art (each NIS 56). The former were small cream puffs dusted with macha powder and sugar, served with dips of caramel miso and Thai basil-infused white chocolate. Once we started popping them into our mouths, they were practically addictive.The latter were pieces of brioche soaked in a spiced syrup and topped with roasted pineapple, meringue and pecan crumble, accompanied by a scoop of coconut sorbet. This creative confection yielded a terrific interplay of flavors and textures.The desserts went nicely with Vietnamese coffee, available either hot or cold (NIS 18).There is no denying that Nithan Thai is an expensive restaurant, making it a good choice for occasions deserving of a splurge.But there is a business lunch menu served weekdays from noon until 5 p.m. that can cut the cost of a twocourse nearly in half.The restaurant also has a dedicated vegan menu.Additionally, it prepares a special vegan feast once a month.
The writer was a guest of the restaurant.Nithan Thai
Not kosher
21 Ha’arba’a St., Tel Aviv
Tel: (03) 560-0555