‘Spotlight’ hones in on a scandal. 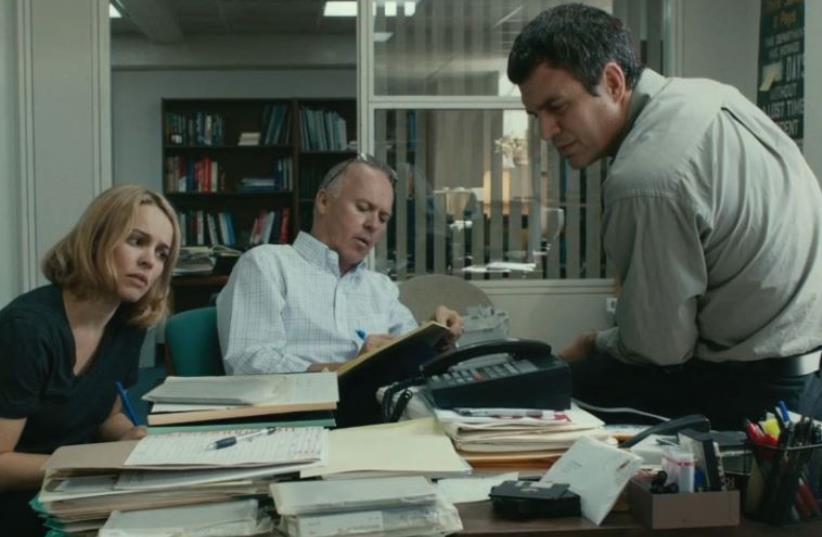 ‘Spotlight’ movie
(photo credit: PR)
Advertisement
Directed by Tom McCarthy With Michael Keaton, Mark Ruffalo, Rachel McAdams Running time: 128 minutes Rating: R (for some language, including sexual references) Many of my colleagues at the New York Post were educated at Catholic schools and, after a few drinks, they liked to reminisce. I used to think that their stories about the cruelty of the nuns and priests were exaggerated for comic effect.But now I wonder whether the brutal corporal punishment they described wasn’t just a small part of the abuse they endured.The worldwide revelations of pedophilia in the Catholic Church have reached up to high levels of the Vatican in recent years.Perhaps some people have become jaded about this issue, particularly those of us who are not Catholics and never put our faith in anyone from the Church.But Spotlight, a brilliant new film, will shake you out of your complacency and renew your faith in the power of investigative journalism.Nominated for six Oscars, including Best Picture, Best Director (Tom McCarthy), Best Screenplay, Best Supporting Actor (Mark Ruffalo) and Best Supporting Actress (Rachel McAdams), the movie focuses on an investigative journalism team at The Boston Globe in the early 2000s. This team uncovers not only the sexual abuse of children in Boston by priests but also the conspiracy on the part of the Church to cover it up.This is no less an important scandal than Watergate, and this movie is All the President’s Men for the 21st century, one of the best movies ever about reporters and how they work. The essence of journalism – getting people to tell you things they want to hide and reporting a story that people will not find out anywhere else – is front and center here, in all its glory. Fewer and fewer newspapers have the budget for real investigative journalism anymore, and this movie demonstrates why that is a tragedy.When a new editor, Marty Baron (Liev Schreiber), comes to The Boston Globe from Miami, he gets interested in some abuse cases that have come to light. Everyone else at the paper, including assistant managing editor Ben Bradlee Jr. (John Slattery), the son of the Washington Post editor who uncovered the Watergate scandal, thinks that the paper’s initial daily coverage of the story is enough.But Baron pushes, and Bradlee turns the story over to the Spotlight team, a group of investigative reporters headed by Walter Robinson (Michael Keaton).Among the reporters on the team are Mike Rezendes (Mark Ruffalo) and Sacha Pfeiffer (Rachel McAdams). Robinson and the reporters were all raised Catholic, and Robinson is the quintessential Boston insider, who went to the best Catholic schools and golfs with lawyers who work for the Church. Although none of them are devout Catholics, they are all shocked in a deeply personal way by the extent of the abuse and the ruthless efficiency of the Church’s cover-up.The movie layers in complexity by examining why it took the press so long to cover the story. It is honest about the reporters’ mixed motives – they want to tell the truth and help bring the perpetrators to justice, but they also want to get the story before any other paper does and receive recognition.Te film’s director, Tom McCarthy, whose previous films include the indie gems The Station Agent and The Visitor, does a masterful job telling a complex story. McCarthy, who is also an actor, played a deceptive reporter in The Wire in a storyline that critiqued newspaper editors’ reluctance to invest in investigative journalism.The ensemble acting is wonderful. This is the kind of movie where no actor wins an award because they are all so good, but Michael Keaton plays the character who undergoes the most extensive personal journey, as he gradually loses faith in the system in which he grew up. John Slattery, one of the stars of Mad Men, is so convincing that I only thought of wisecracking Roger Sterling once, when he first appeared.While this Catholic pedophilia scandal was horrifically widespread, I hope the movie encourages people to be vigilant about abuse by authority figures of every religion. There have been enough similar scandals in the Jewish community in recent years to teach us that there are pedophiles – and institutions that cover up their abuse – of every faith.