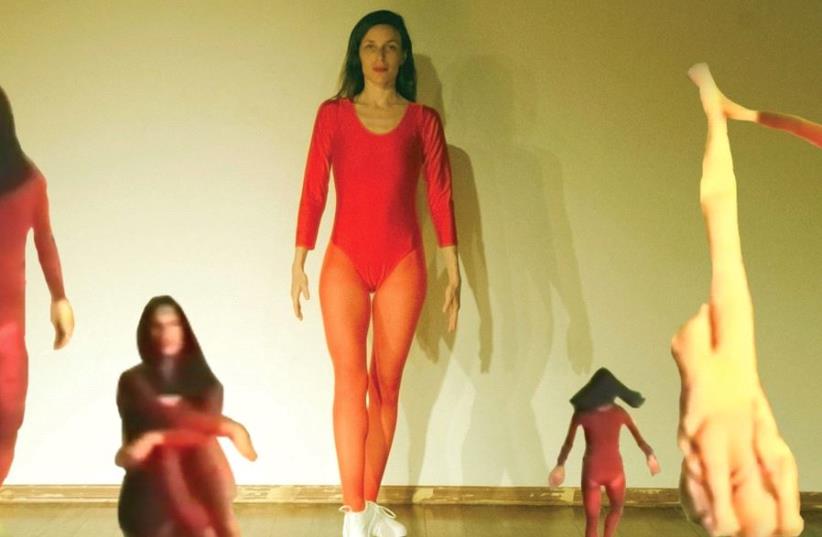 Ori Lenkiski performing ‘Portrait #2.’
(photo credit: DAN BEN-ARI)
Advertisement
The past year has seen countless metamorphoses and drastic changes in the global political sphere. The United States was divided by tumultuous presidential elections. Britain withdrew from the European Union. In Europe, terror attacks struck cities such as Brussels, Manchester, London and Paris, claiming the lives of hundreds. And in the Middle East, the Syrian civil war is still raging.In the face of such a problematic reality, how can we remain silent? And if we do choose to do something, what kind of course of action should we take?Intimadance, a thought-provoking dance festival, tackles these questions in a series of brave and inspiring performances that revolve around the importance of reaction – physical, emotional and artistic.While the various performances center around individual themes, they all urge the viewers to act on their impulses and to reject passivity in their dynamic, everyday lives. Or as artistic directors Anat Katz and Erez Ma’ayan put it in several pressing questions, “How should we react? What reaction can withstand the rapidly changing circumstances? Is the artist’s present toolbox still relevant and effective enough to create a reaction in today’s world? What does creativity have to offer to our esoteric, temporary world?” The choreographers and dancers participating in the festival, which will take place for the 17th year at the Tmuna Theater in Tel Aviv, each offers his/her own answers about the balance they attempt to strike between inertia and activity.Among the notable performances in the festival is choreographer, dancer and writer Ori Lenkinski’s piece titled Portrait #2. In it, Lenkinski brings to life a choreography called Portrait of a Demagogue, crafted by choreographer Rachel Kafri and delivered on stage 40 years ago by Ruth Eshel, a scholar, choreographer and dance critic. Lenkinski delves into the depths of the old choreography, rendering it her own and offering a modern take on the moves; in other words, a new and resonant reaction. Eshel joins her on stage in a moving guest performance that merges between past and present, action and reaction.Another key performance is that of internationally acclaimed Dutch dancer Moreno Perna. His creation is called LDRC or Lana del Rey Changed (Since the Fire Nation Attacked). Perna focused his work on one of the most influential changes that modern technology introduced into our lives – the Internet. The artist incorporates viral videos and images that circulated on social media platforms such as Facebook and YouTube in an attempt to “navigate that immense amount of material that is the Internet.”Perna says he was moved to explore the Internet as a world that has “its own rules and its own weird logic.”“I want to enter the rabbit hole of this amazing wonderland. I want to embody this world. To be in it. To be it,” he says.Another central performance that will invite viewers to join in on an intense emotional journey is British choreographer Rachel Erdos’s Q&A (Intimacy in 36 Questions). Erdos based her work on the 1977 study of psychologist Arthur Aron titled “Experimental Generation of Interpersonal Closeness.” In it, Aron put together 36 questions that were intended for two strangers to ask each other. The questions start off generic enough and gradually become more and more personal.According to the study, participants who opened themselves up to strangers, revealed intimate facets of their personalities and allowed themselves to be vulnerable were more likely to develop strong intimacy that evolved into immediate infatuation and even made some feel that they had fallen in love.The four dancers who bring Erdos’s creation to life reveal their own personal experiences and aspects of their lives in an intimate dance that takes a closer look at love as a human reaction to social interaction, as well as the heart’s natural reaction to that which it desires.Also gracing the stage will be Israeli dancer and choreographer Renana Raz. She explores a reactionary process that is as far removed from love as possible – war. In her piece called WART, Raz seeks to portray the meeting point between what she deems the two opposing extremes: war and creation.In it, she uses images that are associated with war, removes them from their original context and places them in a new, fantastical and good world. The new world Raz gives birth to in her creation asks to turn ugliness into beauty.

The Intimadance Festival takes place June 27 to July 1 at Tmuna Theater in Tel Aviv.
Advertisement
Subscribe for our daily newsletter