Exclusivity and comfort are just steps from the sea at the new Port and Blue hotel. 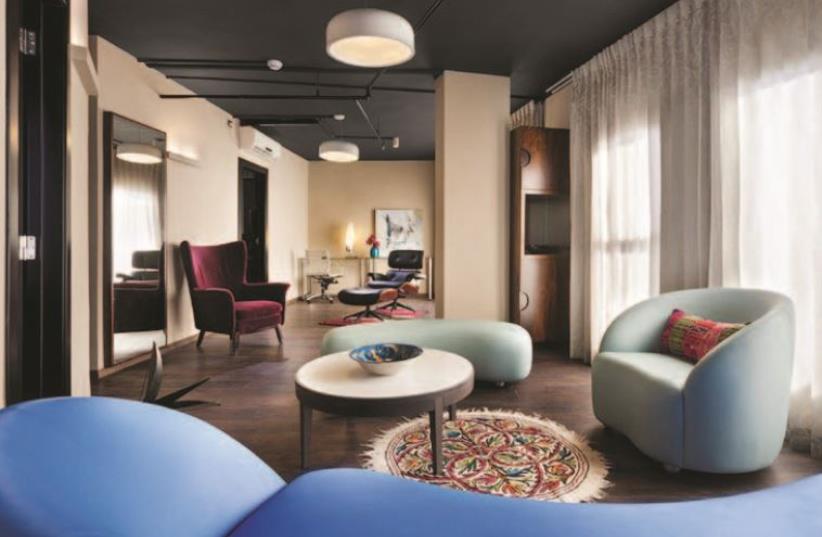 Port and Blue TLV Suites Hotel.
(photo credit: PORT AND BLUE TLV SUITES HOTEL)
Advertisement
If you’re going to Tel Aviv and want to take in the sea breezes and tranquil view of the port while getting topnotch treatment and a good night’s sleep, then book a room at the newly opened Port and Blue TLV Suites Hotel. The neighborhood is awash with trendy stores, restaurants and a fantastic boardwalk, which is matched only by the high-flying waves that rhythmically glance off the port wall, sometimes giving you a nice outdoor shower if you get too close.“Port and Blue was designed to provide an exclusive and unique experience for guests, who get a full suite for the price of a single room,” says hotel CEO Ruth Kaplan.“A lot of creative thought was invested in designing every room. The hotel, the rooms and the suites were all created to enable guests to relax in an environment that is calm and tranquil, as well as having an intimate homey atmosphere.”That was one of the first things that struck my wife and me when we arrived for a 24-hour midweek getaway – the perfect balance of sophistication and hominess that the hotel exudes from the moment you enter the lobby.With an estimated 30 percent local clientele and 70% foreign businesspersons and tourists, this hotel knows how to tailor itself to a cosmopolitan crowd.The layout, stylish chairs, elegant couches, Naomi Paran artwork on display and enormous plasma screen television tell you a story of a modern, up-and-coming hotel that is sure to take the port area by storm.But the small and intimate reception area – a single desk manned by one very friendly and personable attendant – tells you a story of an experience that is far more family-like than your average giant hotel where everyone relaxes in isolation.Some of that personal touch definitely relates to the size of Port and Blue. With 77 rooms, 53 of which are suites, laid out over seven floors, it is far more than a small mom-and-pop hotel. It incorporates some of the pluses of that experience that its giant competitors cannot match.This new hot spot, which opened its doors in September, came about from around NIS 20 million invested by Eli Gonen and Kalman Hubor, owners of Terra Management and Holdings.In a few months, the hotel will add a restaurant and bar off the lobby, as well as a lower level that will feature exercise and spa treatment rooms.With a range of five sizes and levels of rooms, though all are luxurious, the spectrum of possibilities allows some guests to experience luxury for a bargain and others to splurge and take it up an extra notch.Fifty-three of the rooms have a separate living room and bedroom, and the top-ofthe- line rooms have large 30- to 40-squaremeter balconies, added comforts, wraparound views and a second bedroom.Another key component of the hotel is that, while it is a good fit for families, it places special emphasis on catering to the needs of business travelers. To that end, the hotel and the rooms are dedicated to providing “a diverse full range of services and pampering that can only be found in the top level of vacation sites,” Kaplan says.The hotel also has a conference room, which is fully equipped for connecting with international business contacts.Port and Blue can also be described as seriously hot-wired. Our Deluxe Suite had a massive flat-screen television in the living-room area and the side bedroom, to complement the video screen in the elevator that provided running news updates.The rooms themselves flip on with the latest in hi-tech. Placing your room key card in a card holder in the wall next to the door immediately activates the lights and the temperature control system.With a color scheme emphasizing the excitement of Tel Aviv, along with the sky-blue spirit of the nearby sea, the room exudes luxury. It comes with a duo of robes and slippers and a bed that’s comfortable without being too soft. The list of additional amenities continues with free hi-speed Internet and a shiny new coffee machine befitting the spanking new hotel.Not hermetically sound-proof, the walls do keep out most of the traffic and surrounding hubbub or at least reduce it to a low din.Location-wise, the hotel is strategically situated on the axis bridging northern and southern Tel Aviv, close to Hayarkon Park. It does not have its own parking garage, but it does have a parking arrangement across the street for guests.Prices per night for double occupancy including breakfast start at a reduced introductory price of NIS 695 and run up to NIS 3,000 for the Presidential Suite.

The writer was a guest of the hotel.Port and Blue TLV Suites Hotel 1 Tzidon Street, Tel Aviv (03) 627-7070; www.portandblue.com
Advertisement
Subscribe for our daily newsletter