Sushi and beyond at Yakimono Tel Aviv

Yakimono at the Tel Aviv Hilton offers a stunning array of Japanese dishes. 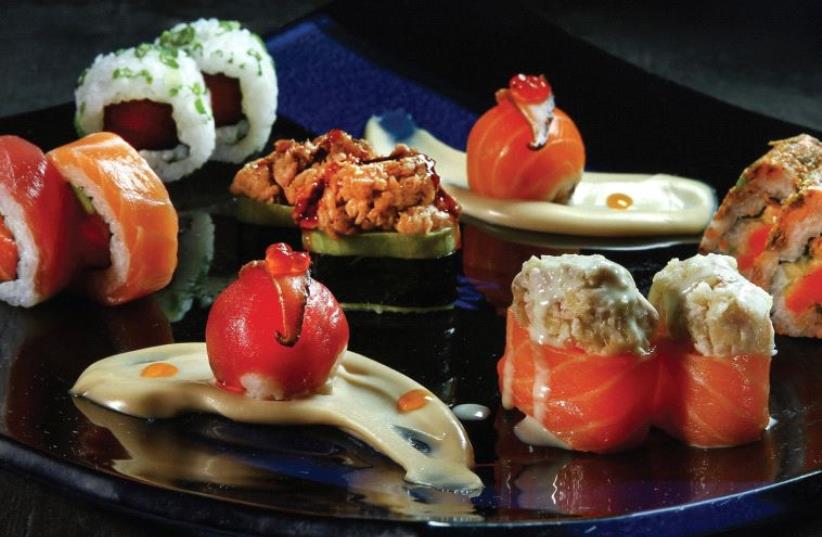 Yakimono restaurant
(photo credit: PR)
Advertisement
For many diners, Japanese food begins and ends with sushi.But Japanese cuisine has plenty more to offer as I discovered on a recent visit to the Tel Aviv Hilton’s Yakimono restaurant.Yakimono is a small and enticing place situated just off the bustling glamour of the Hilton lobby. The tasting menu, with a broad selection of Japanese dishes, is designed to appeal to the neophyte, as well as hardened connoisseurs of the esoteric Asian cuisine (NIS 250).The restaurant manager is 30-year-old Alexander Cohen, who grew up in the catering business, with a father who opened the first Yakimono on Rothschild Boulevard years before.One of the most attractive features of Japanese food is that it is perfect for the calorie-conscious.While every dish brought to our table was inordinately tasty, nothing was remotely fatty or oily.For perpetual dieters, this is a great advantage. And even if some of the dishes were slightly sweet, the overall effect of the food at Yakimono was unexpectedly healthy, or so it seemed.Having sampled a Japanese cocktail made from sake, choya (plum juice), lemon juice and strawberry syrup that packed quite a punch, we started on the food.The first thing to arrive was a bowl of Kushiyaki salad, which is sweet pickled vegetables. By coincidence, I had received the identical dish that day as a gift from my daughter’s mother-in-law, who is of Polish origin. Clearly, Kushiyaki salad crosses international boundaries.However, the next dish didn’t. It was purely and exclusively Japanese. It consisted of steamed rice paper wrapped around a spinach filling and served with miso sauce. As well as being delicious, it was something my taste buds had never encountered before.As this was a tasting menu, several other dishes followed in quick succession.Maguro pepper consisted of very thin slices of slightly seared raw tuna arranged in a circle and served with equally thin slices of lemon and a soy and ginger sauce.This just melted in the mouth and rendered a superb mix of strong flavors. It was also beautifully presented with the flower-like plate of fish slices decorated with swirls of piped mustard, which we were recommended to eat with the fish.Next to arrive was fish wasabi – fillets of gray mullet lightly fried with a spicy wasabi sauce.By this time we were loosening our belts a notch – and we had not even started on the sushi.Finally, a plate of various kinds of sushi arrived at the table – one more beautiful than the next. They truly were mini works of art, with the strips of black Nori seaweed contrasting with the white rice, the fillings like abstract creations of carrot sticks, avocado and smoked salmon. It seemed a desecration to eat them – but we did, anyway.Cohen is excited about bringing Yakimono to the general public and feels it has many benefits besides the basic one of satisfying the palate.“There are many advantages to having a tasting menu,” he says.“It opens the door to a whole different culture, a culture of sharing and of introducing diners to different tastes they may not have experienced before. We use only the highest-level ingredients,” he stresses.After enjoying a meal at Yakimono, one can only agree with him. Dining at Yakimono is a culinary experience not to be missed.The NIS 250 tasting menu includes red or white house wine and two hours of free parking.The writer was a guest of the restaurant.Yakimono
Kosher
Tel Aviv Hilton
205 Hayarkon Street, Tel Aviv
Tel: (03) 520-2222 Sunday to Thursday, 5 p.m. to 11 p.m.